Saturday morning I relaxed and did chores. A house this size and with this many cats needs a lot of cleaning!
I took Arthur to his monthly eye drain; he seemed calm throughout the drive, not even meowing, but toward the end he barfed an amazing amount - fortunately it was on the floor of the back seat which is easily cleaned. He seemed embarrassed.
The weather was too sloppy to meet with Jenn for our socially distant chat so we'll reschedule for next week; she's off for a couple of weeks as the hospital is not doing elective surgery I guess.
This evening I enjoyed a new sort of party, as Hannah and Julie through the Timebank organized a mending party over Zoom. We all had our projects and our snacks, and chatted as we worked. This was very helpful for me as it reduces the likelihood of getting distracted. We also shared advice and opinions; in particular, I got the word that it's ok to plant the beans that I'd let dry on the vine a couple of years ago, and advised to do them in waves every couple of weeks. Since I was on the internet anyway I Google calendared replanting - how modern!
at 10:00 PM No comments:

Friday I slept in as long as the cats would let me - which was not long - because I was going over to Hannah and Julie's to help with their next step in their project to make the back slope useful for gardening and other fun.
First I went to the Post Office drive through to mail my MassMutual pension information - another life milestone.
At Hanna and Julie I met their longtime pal Izzy who showed a whole lot of very practical construction skills as we developed what I would have called an impossible safe walkway around the back corner of the house leading down to the back slop gardens. They'd already put in footers and posts; our job was to build a little deck for the corner that we'd called the "Non-OSHA-compliant corner" and fix the path with shoring and a railing. Since I'd helped with hauling dirt to the gardens last month, they'd put in footers and posts and the concrete had plenty of time to dry.
We had an initial problem attaching a board to the last solid concrete step, because no matter how carefully you measure, the holes you drilled in the concrete just might not match the hole you drilled in the board. Despair! We were about to re-drill the concrete and sink more metal sleeves to match the board when I asked, in all innocence, if we could somehow redrill the board to match the concrete. How to do that when, if you hold the board up to the concrete, you can't see the concrete? Julie realized she could make a paper template by holding up a long sheet of paper (from bags taped together) and rubbing with the side of a crayon. We saved so much work using those crayon rubbing lessons from 2nd grade! (Julie might have been thinking about doing gravestone rubbings on the trip they were supposed to be taking right now that was canceled due to the virus but I was thinking of the plastic maple leaves that as a child we used for leaf rubbings - I don't know whether they were intended for trivets or to enable leaf rubbing play.)
We needed rubble, preferably rocks, concrete and cinder blocks, to shore up the path and supplement the 2x8 defining its downslope edge. Fortunately the neighbors across the street was cleaning out an area full of rubble so we got what we needed just for the hauling. I have never been so appreciative of the invention of the wheelbarrow!
I basically supplied dumb labor ("here, crank this bolt into the wall while I drill the next hole") which is its own form of meditation; there was also some creativity in with the rubble stacking. It really is an interesting problem thinking about rock shape, gravity and rain.
I got home in time for a shower before the 8pm Zoom DND game. Our group is beginning to come together. I realize I have to work on the narrative side in the episode recap; the DM had put some effort into the journal we had found but because I hadn't thought about integrating it into the recap the start of the story wasn't as epic. Learning!
I also have some issues with a plug-in affecting my dndbeyond interface; I plan to have that figured about by the next game in 2 weeks. Most of the time these days I am doing serious stuff, working around the house or helping with various nonprofits or my friends, but some straight-up recreation like this is important!

I returned from the usual morning walk (see photos) and the scheduled FEEST shop and drop in time to participate in a WSBA Section Leaders Zoom meeting. The focus was on executive committee recruitment and succession issues - something that we at WPTL rarely focus on, except for the annual executive committee candidate recruitment. It was a productive discussion, as I heard from some smaller sections that their process was as minimal and frustrating as ours, and from some bigger sections about how their process was well organized and effective and frustrating. I hope to report to WPTL's EC on this soon and maybe we'll do better.
After zoomba, I gardened until it was almost dark. This seems to be a better time of day than the morning, since in the morning I have so many plans for the day, but in the evening I am just chilling. I finished off the south side bed that's near the foundation - originally intended as an herb garden - and pulled the morning glory from the peas on the north fence.
I'm renaming the audience Participation speech to "Part of the Presentation" to make it more mysterious, and scheduled myself for the hot seat next Tuesday. I hope it'll be helpful to the members, and give me a recording to send STU.

Email ThisBlogThis!Share to TwitterShare to FacebookShare to Pinterest
Labels: wsba

Who Is My Top Five?

One of my friends fell while we walked a few days ago, and has wisely decided to take a few days to heal up well. There's just the two of us walking right now, which changes the conversational pattern a bit.

I drove for FEEST and tinkered around the house. Staying focussed without the structure of work is a new challenge, but it's one I would have faced in retirement anyway, so it's nice to have the time to practice. I have been thinking about the advice (from Darren LeCroix) that as speakers we are the average of the 5 people we spend the most time around. This concept may apply to other things as well. I have my walking buddies and my Toastmaster friends and occasional WPTL contacts and ... not much time with the neighbors really, and I never really bonded with the people at work or my bio-family. I don't know that I have a top 5.
The concept works in the opposite direction as well: negative people.
Recently yet another angry brother raged at me on Facebook for disagreeing with him when he posted things which were obviously false, and seems to have cut me off. On the whole, I'm better off this way although I would have preferred to maintain the contact.
This bothered one of my nephews, who had the same thing happen at the same time, so we commiserated a little and I found myself in the role of the Unce With More Experience. It's something I must accept for although I still feel young and inexperienced compared to many, I have the job so I must do it, and forget about the Imposter Syndrome.
It's a little like my "Audience Is Part Of The Presentation" speech. I have to figure out my limits and research around them.
at 5:44 AM No comments:

I spent most of the day tinkering with my presentation "The Audience Is Part Of The Presentation" to SPEAKOUT, and in the end was satisfied with the result. It was, however, quite different from what I had started with. There's a lesson there, I suppose. I am going to give it again to 832, because the message is important.
I got a message confirming my Social Security application. Iacta Alea Est!
At the end of the morning walk, I saw a duck in a tree. 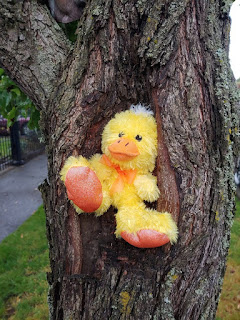 Normally I might assume this was part of the effort to put out stuffed animals for children to see as they went around the neighborhood, but in this case - it's the purple house next to Hannah and Julies's - I think the neighbor just likes to decorate.

Today I revised my Toastmasters speech into straight text, no images, because much of the point was to demonstrate the use of chat for audience engagement, and I couldn't figure out how to do that will fullscreen, except perhaps to log in a second time on my cellphone.
I avoided Memorial Day commemorations or activities. This is a time for reflection not ostentatious display.
I prepared my MassMutual pension mail-in. This is going to be a nice help for my retirement.
The morning walk was soggy but fun. We met at the Puget Ridge Edible Park and walked around that neighborhood. Unfortunately but understandably the oriental garden at the college is closed along with the rest of the campus, but I saw a lot of family gardens. 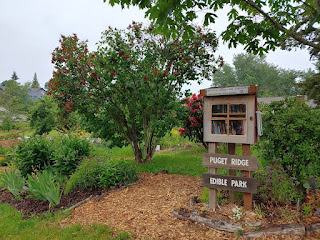 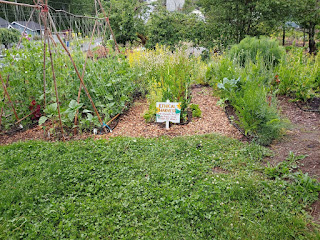 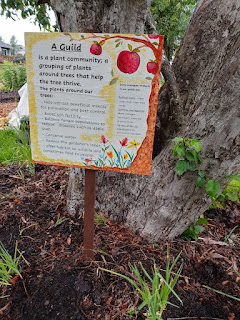 Today I loaded my mower and weedwacker into the car and helped a member of the Time Bank whose grass needed a trim. It was nice to be out in the air. Listening to her troubles I realized again that I am luckier than most.
I completed a version of my speech centered around Powerpoint, but I now believe I can deliver it straight so I don't have to hassle with the whole show screen thing, which I can't get to work easily with chat.
at 9:51 PM No comments: