Let me recommend "Dangers of Cookware, Safe Alternatives" by Melissa Breyer, a nice article on green & healthy cookware. At home, we cook a lot because it's cheap and fun, but a careful selection of cookware can avoid long-run problems. 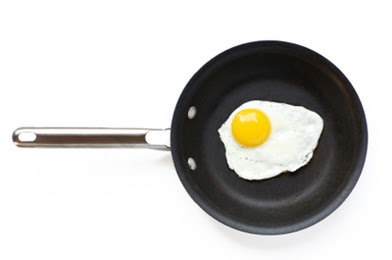 And although DuPont promises that Teflon is safe for humans, the whole canary-in-the-coalmine scenario is hard to ignore. If those toxic Perfluorooctanoic Acid (PFOA) fumes can kill birds in a few minutes, what can they do to us?

...Another concern is straight aluminum. Aluminum conducts heat beautifully, but direct contact with food is undesirable. It’s a soft and highly reactive metal that can leach into food, especially when acidic ingredients are cooked and stored. For example, tomato sauce has been shown to contain 3-6 mg aluminum (per 100 g serving) after cooking in aluminum pans–ingesting aluminum may be linked to Alzheimer’s disease. Proponents of aluminum cookware say it’s debatable how many aluminum molecules get into food, but many scientists and doctors say it’s a serious health risk.

So … here are the cookware materials that are safe to use:" Read More here

A Nice Day for Meetings

6AM: the dreaded spinning class - peddling stationary bikes with a coach and background music. It so sounded boring when I first heard of it that I ignored it for half a year; but the results that my wife Kris had gotten were so striking that I finally gave it. It works! The "boring" part simply doesn't exist with a good coach.

(Of course, one develops a certain scepticism when she says, "OK, one more song, let's sprint crazy fast." Typically my brain is so low on oxygen that I believe her every time; there's a moment of confusion when the next song starts. But, technically, there was "one" more song; she just didn't mention there were a lot more after it. If that's what it takes to fool myself into good health, I'm glad she assumes the karmic burden.)

Next: cataloging and packing books, and worrying about the 1 PM meeting, a presentation of Female Faces of War, a documentary by my friends Kiya Bodding and Moni Law, on the Iraq War/Occupation as seen by women: soldiers, mothers of soldiers, and civilians. It's quite striking! The presentation was to a Mike DeCesare, a staffer of our federal Represenatative, Jim McDermott. He turned out to be quite a friendly guy, with a lot of good questions. I was just along cuz I'd helped set up the meeting (knowing Mike slightly from some contacts through the Bar Association.) We still have to figure out how to present the documentary to more Congresscritters (or, more practically, their staff) but hopefully it will help them take some action!

I was happy to see Jim still had posted the Ralph J. Bunche Award that the WSBA World Peace Through Law Section had given him a few years ago. I'd gotten the photo of Bunche from eBay and arranged the matting & calligraphy. It's still hanging in the office.

The next meeting basically started immeditely, but 10 blocks away. This is where the spinning showed its value: running a few blocks didn't make be breath hard!

2:30: An IRB at Cancer Research And Biotatistics (CRAB). My job is to be a non-scientist, and by golly I very much am! There was quite a discussion about some studies for which CRAB is doing some data management but fortunately I don't need to understand the science well to figure out if the rules set up to protect human subjects are being followed. One of the long-time members brought he young child who want happily crawling all around while we discussed confidence intervals!

Next was a light dinner with Kris and our friend Mel. That was totally nonstressful, especially considering the location: Two Bells in Belltown. The skinny blond waiter was funny, as usual.

Our final meeting was Sustainable Belltown. The topic was container gardening so I definitely didn't want to miss it; in the mingling afterwards I think those of us from the Centennial have a concensus to try to get herbs going in the big pots by the grill (...imagine having fresh herbs to put on the charred slabs of charred stuff!) I think the rooftop pots will be excellent for tomatoes, not only due to the sun but also because the pavers get really, really warm.

We got home rather late for us, but it was a day in which I got a lot done. Tomorrow I'll have to follow up.
at 6:57 PM No comments: Links to this post

Technophobia vs. TelePrompters: A Comic Scandal

The reichwing is outraged that President Barack Obama uses a teleprompter. He uses it a lot, probably more than any president before him. Why is this a scandal to them?

The simple fact is that when you give a speech, you have notes. You used to write them on paper, and look down from time to time to refresh your memory. The TelePrompter is just better technology than 3x5 cards. That's all.

Yet the Party of Antiscience hates Obama using the TelePrompter. Why? Are they just Luddites?

After all, during his epic CPAC rant, Rush Limbaugh read off paper (when he looked up and got away from reading, he started inventing new words for our Constitution.) So maybe the reichwing is just wedded to dead trees. (George Washington NEVER used a teleprompter! Teleprompters are not in our Constitution!!!)

Or are they just trying to portray Obama as out-of-touch with the average person, who doesn't have a TelePrompter. Obama's extremely popular, in large part because he's very genuine, and he actually listens to people. So it's important to the reichwing to attack him on his genuineness.

Funny thing: young people don't fear technology. We (I'm speaking of youth as a attitude, not an age) don't fear tech. Teleprompters are obviously better than notecards, so why not use them?


Meanwhile, courtesy of John Aravosis on Americablog, we see some other examples of Telepromter use: 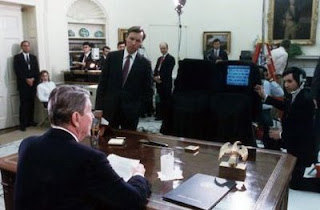 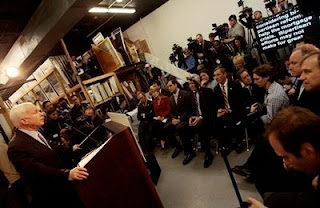 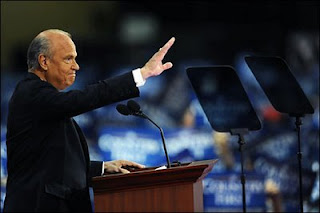 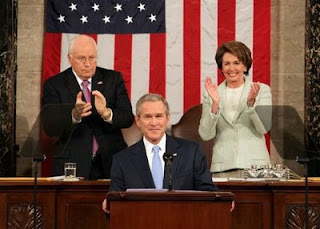 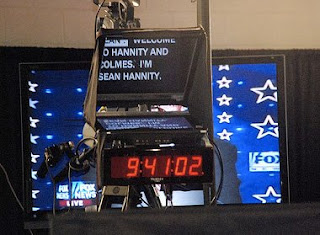 Who Should Watch the Watchmen? You!

Watchmen is the first movie I've seen that is based on a comic book, but is not a comic book movie.

Certainly, the characters wear costumes and do outrageous things; one of them even has superhuman powers. However, the movie is not about men in tights beating up other men wearing capes (... although we are reminded as to where Edna Mode of The Incredibles got her "No Capes!" mandate ... poor Dollar Bill! ...)

Think about how the Incredibles (which was not originally a comic) was basically about a nuclear family (in the non-super-powered sense) dealing with transitioning from a pair of freewheeling newlyweds to responsible parents with appropriately bratty (that is to say: healthy!) kids. There, the superhero motif works (where the Spiderman movies are mere fluff) because the Story is more important than the Spandex.

Likewise, Watchmen is not about how Ozymandias got to be the World's Smartest Man or where Nite Owl II build his Nerdship or whether The Comedian can beat the crap out of Moloch once again. The core of Watchmen could have been made without any costumes at all; put everybody in a suit, make Dr. Manhattan a brilliant physicist, and what changes except for the gratuitous (...although visually nice...) sidetrip to Mars? This would still be a finely plotted action/adventure thriller, built around a murder mystery that leads to a Vast Conspiracy, with a dangerous love triangle for spice. It just wouldn't be as much costumed fun.

The movie tries rather leadenly to Address a Big Question: will we do evil to accomplish good? How many people are we willing to slaughter to save the world from communism, Al Qaeda, or whatever evil is at the top of our color-coded charts today?

We can appreciate the author's intent to be serious while disposing of his solution by rejecting its factual premises. The central characters draw faulty conclusions from a faulty understanding of human nature; it's simply false that we are damned by nature to the Hobbesian brutal world inhabited by the movie's Flawed (to say the least) Heroes (some of whom are honest enough to admit that they are All Barking Mad).

Surely with both a demigod and The World's Smartest Man on the job, they could come up with a better solution than Yet Another Atrocity; we do that all the time in The Real World. And let us not forget that the Flawed Solution is itself unstable, as exposed in the brilliantly-imaged coda.

But the prosaic reality wouldn't give us this Epic Tale of Flawed Heroes, so I'm not complaining.

This may be what baffled the critics: this isn't a comic book movie. It's a movie done in comic book costumes. Think about how "The Magnificent Seven" is basically "The Seven Samurai" in different costume; there is an uber-movie underlying both, consisting ( in the language of web pages ) of the same content given instantiation with different style sheets. (I can't wait to see Seven Samurai expressed as XML and given Mario style ... but I digress.)

One point that distinguishes Watchmen from conventional comic book movies the fight scenes. In comic book movies, they're there for fun and mayhem and setting up the video game & action figure tie-ins. The good guy stomps on some Evil Red Shirts and gets clobbered by a Boss until, in a Climactic Battle, he Discovers Something Inside and fells the Big Bad. In Watchmen, this doesn't happen; the fight scenes advance characterization and plot. For example, the fight in the alley establishes the young Spencer Tracy and Katherine Hepburn characters are co-workers in denial about their mutual attraction. Later, the fight in the prison alley is the Perfect Ending to the Perfect First Date (complete with the annoying friend who has to delay everything to visit the men's room.) This all makes the fight scenes vastly more interesting than the usual pointless thud and blunder.

People who've read the Graphic Novel will notice a few changes, nearly all to the good. Minor roles are combined (no more feckless Captain Metropolis, or whatever his name was) and the climactic Big Thing is vastly improved by eliminating a silly complication in favor of a more logical construction that explains even more of the side events. You'll know what I mean when you see it. An underappreciated addition deals with the graphic novel's lack of emotional resolution to the Grand Climax: somebody deserves punishment, and knows it; in the Graphic Novel it doesn't happen. In the movie, the Reasonable Man does what has to be done and the Guilty Man accepts it. Justice is served, although not even the Cosmic Watchmaker can repair everything.

(I do think the added line "The TV said you were on Mars" is worse than useless; like the "Is that artillery or my heart beating?" line in Casablanca, silence is better than a clumsy line.)

Some critics have complained that the film is too complicated or doesn't explain things well enough. That may or may not be so; I'd welcome comments from someone who hasn't read the graphic novel. However, I did not find scenes that dragged on; perhaps those critics were expecting a simple comic book movie and didn't bring their brains to the party.