We had a constant stream of visitors from about 11am to around 3:30 today, for the Village Green Tour of Gardens. A few came earlier, and one couple stopped by around 5 as we were relaxing over cold beer with our friend Gail Gorud. It's kinda flattering to have people stop by to look at our garden, since in the most important sense we are very ordinary homeowners; anyone could have done what we did - we are simply among the first. Our photovoltaic system was very popular and we almost ran out of PSCCU brochures - which is important, because the financing side of the solar cell project, like that for the rain garden, seems to be a major barrier for many people.
at 11:33 PM No comments: Links to this post

Imp And The Cat Goddess 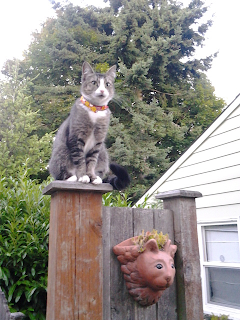 Our Cat, Impromptu Underfoot McCord, is looking solemnly into infinity, or perhaps just having us on!
The Cat Goddess was one of the first bits of decoration we added to our fence. We like the terra-cotta look; it goes well with the greenery. And it's always nice to have a cat watching over things!

by Jacelyn Howells can help the most advanced collector or dealer, as well as the beginner. It includes: 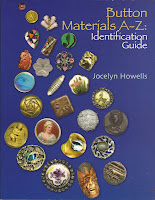 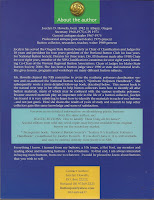 GO PLEDGE NOW!
This is a Big Frickin' Deal!
AND ... the cool swag is going fast (I got mine!)....
The FOIA MACHINE KICKSTARTER:

"FOIA became law July 4, 1966 – and it’s been fighting for its life ever since. Presidents and Congress have tried to make it harder to use. Sometimes they’ve been successful; sometimes they haven’t. State sunshine laws frequently come under attack as well. CIR and FOIA Machine will help keep the laws strong by using them tenaciously and teaching others how to do the same. Now that you’ve celebrated the Fourth of July with sparklers and picnics, declare your independence from government secrets – help us launch FOIA Machine.

Some of America’s top investigative reporters are building a sophisticated and open online platform to give people a legal way to get these secrets from the government. It’s called FOIA Machine, it's almost ready to launch and needs your help!

"Free" information is not always free

The Freedom of Information Act (FOIA), called “FOY-ah” by journalists, is at the heart of public demands for government accountability. This federal law says anyone can make a freedom of information request. Many states have similar legislation, often called sunshine laws.
Sounds easy, right?
But there’s a catch: FOIA is riddled with exceptions, its rules differ widely from agency to agency and state to state, it often requires legal expertise to surmount bureaucratic brick walls, and “free” requests can end up costing a bundle of money. Those who have abused public trust often are able to hide behind all of this bureaucracy. Their secrets, held in millions of government documents, simply won’t reveal themselves.

Meet FOIA Machine, an integrated web platform developed by veteran investigative reporters and technology pros. It's sponsored by the award-winning nonprofit The Center for Investigative Reporting.
It’s like TurboTax for government records. We’re streamlining the complicated process of filing and tracking public record requests, putting all of the steps, rules, exceptions and best practices in one place and allowing users to track requests on dashboards, receive alerts, share request blueprints and get social support and expertise from the FOIA Machine community.
This new platform is open and free for anyone, from citizen groups to reporters, the public, commercial media and educators. And it can be used to extract documents no matter the issue – human rights, the environment, political reform, public safety, privacy and more.
If this sounds like a smart idea to you, you’re not alone. At last count, almost 800 reporters have signed up to start using FOIA Machine when it launches publicly. The seed money for the project ($47,000) was provided by the John S. and James L. Knight Foundation.
“FOIA Machine will aid journalists and private citizens in accessing millions of important governmental documents around the world that are covered by freedom of information laws which exist in more than 90 countries.”  – The Knight Foundation, announcing its 2012 funding for the prototype “to advance innovation in media and journalism”

So what's left to do before launch?

When we started this project in late 2012, it was called BirdDog and we thought it was only going to collect statistics on government response times to public records act requests. With the support of the Knight Foundation, we were able to expand our scope to include sending and generating information requests.
Over the next few months, we built out new features and tested them in the newsroom of CIR until we had a workable prototype, now called FOIA Machine.
Today, FOIA Machine can generate, edit and send requests to government agencies fairly well. It's useable but it's not ready for the general public.


That's where Kickstarter comes in: we're asking for your help to finish development, improve design and pay for servers and data curation.
We have 15 users currently sending real freedom of information requests through FOIA Machine, but almost 800 people are still waiting to use it. And when we launch, that number will grow.
Here's what we need to do to open this up to everyone:

FOIA Machine is currently housed at CIR (more about us in a minute) and is being built by a team of people working at a variety of news organizations:
The FOIA Machine advisory group includes Chase Davis of The New York Times, David Herzog of the University of Missouri, T. Christian Miller of ProPublica, and Martha Mendoza of the Associated Press.
CIR has taken on FOIA Machine because we believe that journalism that moves citizens to action is an essential pillar of democracy. To correct injustices, people need to know what's really happening. FOIA Machine is all about bringing previously hidden information to light.
Based in the San Francisco Bay Area, CIR’s reporters, editors, producers and data analysts produce deep investigative stories that make an impact. CIR’s staff are experts at using freedom of information laws for investigations into important issues such as themistreatment of U.S. veterans, abuse in state hospitals, incompetence and corruption at the U.S. border, and charity fraud.
We are the only nonprofit journalism organization in the country with the in-house ability to produce stories on every available media platform – from print to video, radio and interactive data applications – making our reporting accessible and engaging and presented for maximum impact. We have worked with more than 300 news outlets, including FRONTLINE, ABC, Univision, Al-Jazeera English, The Young Turks, Stars and Stripes, the San Francisco Chronicle, KQED, NPR, The Daily Beast, CNN, YouTube and more.


CIR is home to FOIA Machine until it is ready to go public (that’s where you come in!), when it will be handed over to the national, nonprofit Investigative Reporters and Editors(IRE), which offers its hundreds of members around the world access to its extensive resource center, conferences and specialized training."

OK, so you get it? These people are for real, and this project can make a difference. Jump in - you're be proud you did!
at 9:12 PM No comments: Links to this post

Email ThisBlogThis!Share to TwitterShare to FacebookShare to Pinterest
Labels: politics, Things That Make You Go Huh

July 15: Taking Mom To The Doctor 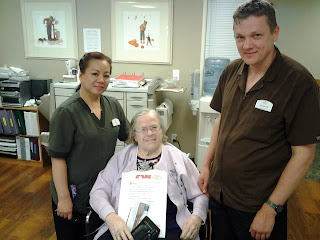 When mom goes to the doctor, it seems to be policy that a family member must be along to push her wheelchair. It was explained to me in terms of liability but maybe they also want a third party to listen to what the doctor is saying. They put down notes on a packet mom takes back to her care provider, but there's no substitute for ears on the ground. Or whatever.
Monday the 15th it was my turn. I met her at Bethany and rode in the van over to the doctor's (note: it's a good idea to make it clear when the van appointment's made if you're riding along, because the van coming back may not be the one going over, and maybe there wouldn't be room. Ooops!)
We got to the doctor more than half an hour early, so we went for a walk. The doctor is right next to where mom used to live, Emeritus, so we rolled over to see if anyone was there to say hello. And there was - in the room where the medical aides work, there were two people who she recognized. There were hugs all around and a lot of happy talk, catching up with people and finding out who's where.
Mom had lived at Emeritus many years, and although she had to move, it's quite difficult to miss the people you see on a daily basis. Maybe every time we go to that doctor, we should factor in a little time for a therapeutic stroll around the old place