Washington, DC - President Barack Obama was caught on video petting the family dog for around 10 seconds today, igniting yet a 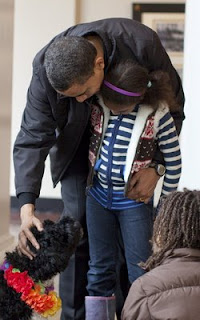 nother scandal in his trouble-plagued administration.

"All that talk of bipartisanship was a sham," thundered Newt Gingrich, at home with his current wife, "Not once has Obama offered to pet Congressional Republicans, yet here he is caught in the act of petting, not a House Minority Leader or even a Senate Minority Whip, but a Portuguese water dog."

"Liberals claim there is no harm in petting a dog," sniffed George Will, "But this often leads to the dog begging for more. Many will roll on their backs for their bellies to be scratched. Then what? This sort of thing brought down the Roman Empire, and it's a threat to American heuristical hegemony everywhere."

There was some controversy in this story leading off every network news hour. Fox News labelled it "PettingTheDogGate" while MSNBC called it "DogGateII", a reference to the scandal surrounding the initial selection of the animal. Sunday Talk Shows are already booking pundits to denounce the liberal bias in reporting this story.

"Until that dog is put under oath and made to explain what he was offered for his continuing silence on this matter," said Republican National Chair Michael Steele, "The Republican Party is going to hammer away on this. It's an issue Americans care about!"
at 10:30 PM No comments: Links to this post

Gitagovinda: The Indian Song of Songs 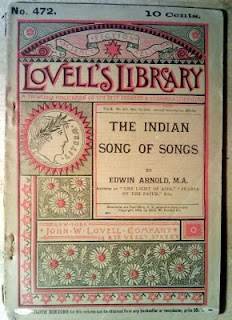 Today I cataloged "The Indian Song of Songs", a vintage translation of Gitagovinda, the remarkable sacred sensuous musical drama from India by the 12th century poet Jayadeva, translated in the 19th century by Edwin Arnold. This Out of Print paperback would be notable if only as No. 472 in a series entitled "Lovell's Library, A Weekly Publication of the Best Current & Standard Literature" as the cover proudly proclaims. It has pages of period advertisements, e.g. for pianofortes, "Crosby's Vitalized Phos-phites", and "Pond's Extract - the Lady's Friend". Truly, this is a window into a vanished time!

However, the content is also interesting. Basically, it's an English translation of a Sanskrit play of gods and romance, edited somewhat (according to the translator) "in order to comply with the canons of Western propriety". The translator's Preface compares it to the Biblical Song of Songs (a.k.a. Song of Solomon or, as I learned it in Catholic school, Canticles) which can be enjoyed for its beautiful poetry or is unabashed sensuality.

The Preface is very helpful in explaining the background of the work, of the complexities of Indian music and its author Jayadeva, but the reader may prefer to leap in and enjoy the story. This may be for you if you like Victorian romantic poetry, or even more so if you like puzzling out the way in which the translator dealt with physical aspects of love "too glowingly depicted by the Indian poet for exact translation".

You can learn more about Gitagovinda here and here.

Email ThisBlogThis!Share to TwitterShare to FacebookShare to Pinterest
Labels: books, Things That Make You Go Huh

Birdseed Sunflowers versus the Russian Giants

Sunflowers grow well in pots on our city patio. Whil 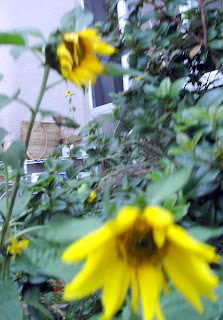 e we could harvest them for food, they're more fun for beauty and even more for entertainment, as the chicadees feed off them.

The more economical kind are simply birdseed sunflowers. Take an ordinary bag of sunflower seeds intended for the birds, and plant some after soaking a short time. A large fraction will bloom, in my experience. The flowers I've been getting are not very large or tall, but there's a lot of them and they're very easy for the lazy gardener.

A little more pricey, but definitely worth it, are the showy Russian Giant sunflowers you can get at almost any seed rack. Nearly all of them germinated for me, and the results were spectacular: blooms as big as my head and nearly as tall. These at quiet spectacular and definitely worth a couple of dollars, if you have a large enough pot. I repurposed bamboo for support where needed, sometimes tying with last year's stalks for added reusiness. I'm hoping to plant enough this year to shade a south-facing wall on the roof of our building and see if it helps reduce the heat.

Torture is for Cowards

In questions of courage, there is one simple rule: What would John Wayne do?
I really wanted to writing something lighthearted and amusing today, maybe something about John Wayne and how a guy with the birth-name of Marion can become the symbol of all that is manly, strong and moral (... too much seriousness is bad for you; my last couple of posts were serious and there's some need for a little balance...) But the newly released torture memos confirm what we had only feared: our country was run for eight years by men so cowardly that they would beat the crap out of helpless prisoners just to make them feel better.

I mean, geez. They waterboarded one guy more than a hundred times! How cowardly can you get?

Look, folks, either waterboarding works, or it doesn't. Its perverted fans claim it makes prisoner swiftly blurt out everything they know, so ... what were the other 99 times about? Was it sado-masochism, or just boredom?

Either way, it takes a real coward to tie a guy up and half-drown him.
And now we know that wasn't all. They would put a collar on a guy, tie a rope to it, and use the apparatus to slam him against the wall. That, my friends, is torture and there's no getting around it. Ask the Duke: would John Wayne to that to a helpless prisoner? He might punch you out in a fair fight, but if you were tied up, he wouldn't even slap you.

Other cowards on the list:
The question still open: arer the American people, as a whole, are so frightened by tied-up prisoners that they'll o.k. beatings, let by-gones be by-gones?
We know that many members of our services were not cowards; they resigned rather than commit torture. I recall well the passage in "Ethics for the Junior Officer" that states (to paraphrase) that an officer who would think nothing of sacrificing his life for his country will sometimes hesitate to sacrifice his career; but ethics sometimes require that. Those officers who quit rather that torture prisoners needs to be sought out and rewarded.
Those officers who decided to follow orders and to beat prisoners need to be found and prosecuted. If the president wants to commute their sentence thereafter, that's up to him, but without prosecution, there can be no honor and no courage.
This is not a mere abstract concept. The torturers walk our streets. The doctors without honor who helped torturers keep prisoners alive for more torture may be practicing in our hospitals. Maybe they can be rehabilitated, but only when their secrets come out. So far, none have shown the courage to do so.
So what are you going to do? Are you going to let our nation's honor remain soiled by the stain of torture, just because facing it is scarey? And just because you like Barack Obama, are you going to let him get away with the Nuremberg defense ("They were only following orders!")

Are you going to let John McCain stand alone against torture?

This is a democracy; our leaders work for us. Their actions are our actions; therefore it is our duty to instruct them what to do. Every phone line to the White House should be burning with outrage; every local office of every Congresscritter should be hearing from those who are not so cowardly as to let the torturers go without a trial. We can make them move, if we try; there are hints of motion already.
This is an issue that tests your courage. If we let Obama let the torturers walk free, then we are all cowards too.
What Would John Wayne Do?
at 8:20 PM No comments: Links to this post