So I'm applying for a job in the legal industry, and at the end of the online form (which otherwise has all the usual stuff) is an invitation to say something in 150 characters that will attract their attention.
So I figure, this is time for another set of haiku and since they invite material that draws their attention, I will at the end do something out of the ordinary:

Either as lawyer
Or database analyst
I hit my deadlines

It is a science
Parsing document data
It is also art

Either way, I doubt anyone else has done something quite like this, which is what they asked for!

Email ThisBlogThis!Share to TwitterShare to FacebookShare to Pinterest
Labels: haiku

A triplet of haiku for a job application.

So I'm applying for a job in the legal industry, and at the end of the online form (which otherwise has all the usual stuff) is an invitation to say something in 150 characters that will attract their attention.
So I figure, this is time for another set of haiku and since they invite material that draws their attention, I will at the end do something out of the ordinary.


Either as lawyer
Or database analyst
I hit my deadlines

It is a science
Parsing document data
It is also art

Now these are not perfect haiku; line 8 requires a special pronunciation (and 150 - "one-fifty"; "-"="dash"), but I hope the joke at the end makes up for it. Either way, I doubt anyone else has done something quite like this, which is what they asked for!
at 8:45 PM No comments: 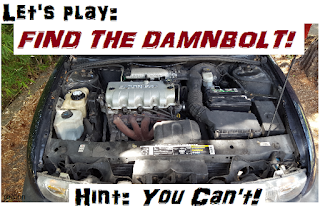 Every car has one; some are designed with two or more: a bolt that you have to loosen, but cannot find no matter where you stand, squat, lie down or creep. It is simply not visible to the human eye.
If by feel you locate the bolt hidden within a maze of engine components, you can't loosen it because the clever arrangement of other parts prevents the turning of a ratchet, and the side-to-side space is too small for a power tools. It is a triumph of engineering!
Today's task was simple: change the starter in my 1999 Saturn SL1. My brother offered to help, which was great since it saved me more than $100 in labor costs. The damnbolt was located between a solenoid and the crankcase; it cannot be seen from outside the engine compartment, I couldn't see it but after fifteen minutes of feeling around, I located it with my middle finger - how appropriate - and then had the task of attaching a socket wrench.
Half an hour later, my brother offered to take over. I readily agreed, as time was wearing on; I still but an apprentices. He labored over the damnbolt for a while, but it resisted his efforts and that of his power driver. Ultimately he realized that due to cramped quarters, the sockets were misaligned with the nuts. He forced everything into alignment by using a spare rod to lever the extension, and not long after that the work was completed.
I feel astonishingly butch for having done this.  I needed help to do the job (!thanks Dan!) but in the end, I faced the damnbolt,and lived to tell them tale!
at 2:34 PM No comments:

A few weeks back, someone stole my housemate's cellphone. It was distressing, but the next part was that the thief contacted her and offered to give it back for money if we met in an hour. We called the police and strung the thief along for a while, but nothing came of this; since we hadn't yet filed a stolen item report the opportunity to catch a thief did not get prioritized. I suppose they really didn't know whether there was a stolen item at all, or merely a commercial dispute.
Today the thief contacted us again, claiming he'd bought the phone from someone and asking her to perform one of the unlock rituals that make it usable. She said she would prefer to have it back. He said he'd give it to her if she'd pay what he paid. Recognizing his voice, she knew this was no sincere offer, but agreed to meet him in a few hours. Then she called the cops. Having a stolen item report, they agree to meet with her and set something up.
We drove to the rendezvous and met some plainclothes cops. I stayed in the background because I'm just the support staff, while my housemates answered a lot of questions and showed them the text messages (I believe they had previously sent the first round of text message in to thee stolen item report). My job was the unglamorous but practical one of staying the heck away and being available to provide transportation home from the station. The housemates rode with one of the cops to observe the thief talking on his phone at the same time he was talking to her, saying he was where they saw him - even though they had never met, there was only one male talking on a cellphone at that spot at that instant. A couple of other cops detained the man, determined that he had a cell phone matching the description, and arrested him. A companion fled and was also arrested.
Now these were clearly not the geniuses of crime that they may have thought they were. After my housemates had filled out their police reports, one of the other cops told them that the arrested guy had said that he intended to give the phone over if he received money but he wasn't going to do it without money. It turns out he was on parole for a violent crime (...which certainly settles the question, if there had been any, as to whether we should have met him the first time around...) and had a no-contact order concerning his partner in crime. All in all, his attempt to make $200 without working for it is going to cost him a lot more, which strongly suggests that, moral considerations aside, he's not very good with economics.
As luck would have it, today was the day that my started decided to fail. I am fortunate that it performed flawlessly all through the big pile of audits I did over the last week, and even took me to the Y and back this morning, but as I drove my housemates around, it stopped working. The housemates were happy to pushstart the thing, and at the police rendezvous an officer gave me the push - which amused everybody - it was not a service I had previously asked of a policeman.
Afterwards I helped my brother change HIS starter, which had gone out earlier. I did not plan things this way but I believe he will help me change mine. Everyone is happy (except the perps and the starters) but I don't expect to see this sort of day repeated often.
at 10:30 PM No comments:

Today I'm working, make good money on a project whose only flaw is that today is its last day, when I get a text from the Princess Drinkalina: I needed to sign the divorce papers today, otherwise ... it was not clear when would happen. I asked her lawyer (who emailed me a reminder) for the significance of letting it slide, and got no reply. I don't expect them to help me out, but it would ave been in their client's interest to be up front. But that's not Kris' nature.
I told Kris to print it if she wanted it signed, an reminded her she'd promised to check with HR on how I could be included on her medical insurance.
When I arrived she gave me a stack of papers and showed me the last page to sign, which I did. After leaving I remembered that I should have gotten a copy but, really, what does it matter?
A while later I got another message: I needed to come back and sign another page. Well I was working; I'd get to it before going home. then I got a phone call, and I've never been good at ignoring those. She asked where I was, and I said "working". I realized that I was now separate from her, and need pay her no more notice than a stranger - a stranger who wanted me to do some thing. I briefly said I'd be by that afternoon and let the conversation lapse.
When I got to WSBA the second time, I ran into Steve Carroll in the bathroom. He looked embarrassed, and well might he; he had not only ignored my pleas for assistance when things were going badly, he volunteered to testify against me. It is well that I learned what sort of person he is before I actually needed him for something. I addressed him cheerfully, which compelled a response from him. Perhaps that was cruel of me.
I composed a set of haiku, and posted them on facebook, to express my feelings:

All actions create.
Signing divorce papers
Can create a hole.


Two had become one


Til one subtracted oneself,
Leaving me nothing.

This signing creates
A new point of origin
To make me a whole.
Princess had the forms again with an arrow toward the thing to be signed, but this time around I would not be so trusting. I sat with the form in the conference room and went through it line-by-line. Hey, that's my profession, right?
I was disappointed but not surprised to discover several errors.


I made corrections, initialed them, presented them to Kris to initial and then to make me a copy of. That was about it.
What I learned:


This all was neither what I wanted nor what I had agree to. I am responsible for not noticing when things started going bad years ago, and fixing it. Kris resisted talking about it and I responded by ignoring it, and thus we are here. Since she had decided to be unfaithful years ago (even before we bought the house she was dating other men in times we were apart) I suppose there was little that could have been done by me, but who knows?

It is unknowable, and relevant now only for doing better in the future.
at 10:00 PM No comments: