My major hobby is books. Sort of. Every week I collect a dozen or more cartons from various sources, most if which end up on the book carts and end tables of our local VA hospital. I can tell that's popular, partly because people who go there tell me, but also because they're gone the next week.
(I can tell it's not the cleaning staff tossing stuff because they're in approved areas but also because the occasional book in Roumanian is never taken.)
I sort these usually so the process is faster, and there is some recycling - mold or excessive wear is best treated that way. Over time this leaves me with a collection of empty shopping cartons, which I try to use in other work, but they add up. Earlier this week someone asked  " Buy Nothing West Seattle (South)" for boxes  and ah-ha! They found a use. How wonderful!
I decided to post my carton of Romanian books. The only reply there was someone looking for books, any books to sell at a local school's fundraiser. I looked at my stock and saw I had enough to spare for this good use. They picked up a load from me later night and I realized that this was an annual sale that I had enjoyed myself for several years. I'm happy to contribute, or to facilitate the combinations, I just hope I don't end up buying too much if it back! 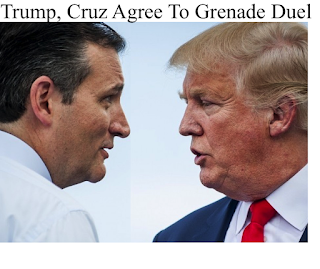 “Only the right to bear arms can prevent the tyranny of a Trump presidency,” said Cruz. “Where better to use that right but here, in Cleveland, home of the fragmentation grenade?”

“This is huge,” agreed Trump. “Everyone knows I have a remarkably good throwing arm. Back in the 70s, I pitched two no-hitters for the Cleveland Cavaliers. To make it easier for little Ted, we’re going to have our duel chained together, ankle-to-ankle - that way he can run but he can’t hide."

RNC officials were ecstatic at the agreement, which had been brokered by losing candidate, Ohio governor John Kasich. “We must avoid the spectacle of a convention that makes any decisions,” said RNC Chair Rince Priebus. Kasich beamed in agreement. “Two walk in, one (or less) walks out.”

An WTFNBC poll found the idea proposal favored by 96% of Americans; factoring in a 5% margin of error showed near-unanimous agreement that the result of a grenade duel at the Republican National Convention would be good for America.