Meatloaf lets you use up leftovers and tag-ends in an efficient way. While I suppose that there may be such things as meatloaf recipes, the basic idea is to take some ground meat, add an egg or two so it holds together, and then add whatever leftovers you have in fridge and pantry, suitably cut up. Try to get some sort of balance of ingredients, and if it goes too far in one direction, add something that takes it in another direction. Put into the oven at 375F until it's cooked all the way through and there it is.
Meatloaf has two basic problems:


Yesterday I stumbled upon a solution to both of these problems: meatloaf muffins! The same mixture that I was about to put into a loaf pan, I instead put into my silicon cupcake forms.
This particular batch of meatloaf included ground meat, two eggs, peppers, dandelion greens, oat meal, flax seed, leftover beans (squashed flat so they mixed in better), the tag-end of a jar of horseradish, ground garlic and bread that was heading toward staledom. The resulting combination was pretty satisfying, although I'm sure I'll never be able to get the exact same formula again.
The only downside of meatloaf muffins is that I'll never again hear George Carlin's brilliant "leftovers" spiel again in the same way, for I've shown that MEATCAKE
at 11:57 PM No comments:

Saint Patrick was a holy man ... 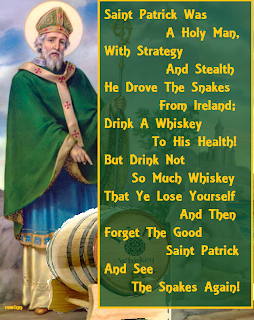 Saint Patrick was a holy man,
With strategy and stealth,
He drove the snakes from Ireland;
Drink a whiskey to his health.
But drink not so much whiskey that
You lose yourself and then
Forget the good Saint Patrick
And see the snakes again!

--- an old toast. I updated the language and added an image

My internet pal Irene Leonard posts Coaching For Change, weekly tips for lawyers that can apply to others as well. This week's sample:

Reduce your stress by reframing your thoughts to a more positive perspective
One of the best ways to reduce stress is to change your negative thinking about things. Here are some reframing examples:
What will help you remind yourself to reframe your negative, stressful thoughts?

See more at http://www.coachingforchange.com/all-law-practice-tips-Irene-Leonard.html
at 5:24 PM No comments:

Calling In Suspicious Car Is Easy 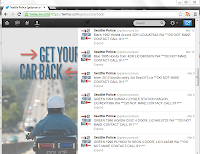 Saturday morning I noticed a car parked in front of the empty rental house next door. It didn't belong to any of our neighbors, and that spot had been used last year to drop off stolen cars, so I took a look. The driverside window was partly open and the radio was gone, which looked suspicious. There was a small chance that this was just a visitor to one of the other neighbors who had parked in a funny spot, so I did nothing.
That evening, the car was still there, so I wrote down the license plate to call it in. I didn't remember the Seattle Police Department's non-emergency line, but google gave me this: http://www.seattle.gov/police/contact/reporting/suspicious_activity.htm which said:


"If you suspect an abandoned vehicle may be stolen, you can check the plates against our stolen car Twitter account at http://twitter.com/getyourcarback - you do not need an account to view this information."

I went to "http://twitter.com/getyourcarback" and imagine my surprise to see right at the top, the very same license plate number I held in my hand!
I didn't think this was really an emergency, but the directions were to call 911 so what the heck. The call didn't taken very long; they took down my information and asked a few questions such as what was the color of the car (...leading me to ponder: was it really black? or just deep midnight blue? that was probably more than the 911 operator wanted to know so I just said "very dark"...). I assume the questions were in part to assure that I wasn't a pranker taking advantage of the twitter feed, but actually had seen something worth checking up on. The operator said they'd send someone out to check on it, and instructed us not to approach anyone who approached the car.
After a while, a police cruiser appeared and the officer spent some time, presumably looking up the license plate. I left him alone, figuring that he'd contact us if he wanted any information, but the situation looked pretty straightforward. It was late evening and I didn't expect a tow right away. Sunday afternoon I looked out the window and the car was gone.
The moral of the story is that checking on a suspicious car is now pretty easy; the twitter feed could even be accessed from my "handbrain" (smartphone). Calling it in was no trouble at all, and hopefully someone got their car back a little bit sooner. I know that if *my* car was stolen, I would want someone to call it in! 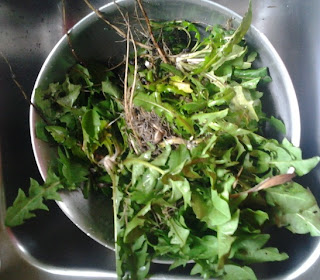 The dandelions are returning, much to the consternation of lawn perfectionists, and I agree that they must not be allowed to proliferate. This is both a matter of fairness to my neighbors, who should not have to put up with seeds blown from my yard to theirs, and a matter of land management, for we have many other things growing in my yard that deserve a chance.
This year I am trying the Salad Gathering Method of Dandelion Control. I strolled the yard, pulling every young dandelion I saw, and in a few minutes had a hatful. I pulled off the tender leaves, discarding stems and roots onto the compost pile. The leaves I rinse and eat, perhaps in a green salad, perhaps added to another dish such as steamed veggies. 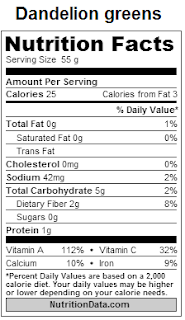