Our south cistern was not draining into the rain garden last week, so I had to figure out why.
The deal with the system is that during our rainy season (roughly September to May) we leave the restricted flow valve open so the cistern drains v-e-r-y slowly into the rain garden, time-shifting the runoff into the system. At other times we close the valve, accumulate the water, and use it on our gardens. (We had to use city water for our garden only for one month this year!)
I opened the valves and forgot about it, but after the rains last week checked the cistern levels. The north cistern was down to the level of the valve - good! - but the south cistern was full up to the overflow spill - bad!
The fix was easy. The most likely culprit was the restricted flow gadget, which is essentially a washer with a teeny-tiny hole in it, through which the cistern drains when the valve is open. Being lazy, I first looked at the clear plastic hose after the gasket and confirmed that water wasn't flowing - it was just standing. I then checked that water was getting to the valve by opening the drain spigot - water flowed freely. I then shut the valve (so the cistern wouldn't drain while I was cleaning things) and unscrewed the grey hose fittings. Everything came lose easily (buy quality! it counts) and the black gasket popped out. The tiny hole was clogged, probably with goo that grew from the pollen or cosmic dust or whatever that gets into the system over the course of a year - nothing really can be done about it. A flick of a finger and the hole was cleaned. I put everything back, opened the valve, and was rewarded with a gurgling sound as water started flowing. I could see a slight agitation of the little air bubble in the transparent hose, confirming all was well and the system was back on line.
Total service time was a minute or three, and this is the first time I've had to do this all year. Truly this system is great for a lazy man like me!
at 11:41 AM No comments: Links to this post

Why Did #Obamacare Cause A Pigeon To Do This To Little Danny? Oh Why??? 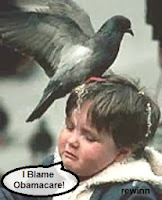 WASHINGTON DC - It was a heartbreaking scene. Little Danny Smith, from the shady village of Arkham, New Hampshire, was visiting our nation's capitol when disaster struck.
"It was awful," said his mother. "Normally there are thousands of tourists thronging the Mall and public buildings. But today it was nearly empty."
Almost alone, and completely unprotected, Danny was struck by surprise by a Capitol pigeon. A pigeon who would have been frightened away by the crowds that would have been there, if it were not for Obamacare.
"I understand that Congress has to shut down the government to keep us from getting used to affordable insurance, purchased through websites that let us compare plans," sobbed Danny, "But why did Obama send a pigeon to poop on my head?"
"This is just another example of big government gone wild," said half-term governor and Fox News commentator Sarah Palin. "I'd say more but I've got to quit now."
Pundits across the spectrum from right-wing to insane right-wing took to the media to demand justice for poor little Danny, the latest victim of Obamacare!
at 1:58 PM No comments: Links to this post