Planted this week: Squash and Shiso! 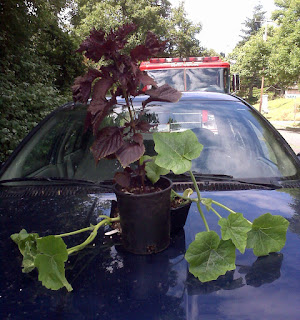 This week I picked up a couple of squash from Village Green, to get a head start on the raised bed. Next year I'll plant from seed, but I'm loving the big floppy leaves already!
I also got a "Shiso", which is a sort of tall purple basel used (they say) in Japanese cooking. It's a nice contrast to the rest of our plants, most of which are green.
While I was at VG, a couple of firemen came by to look around, giving me the chance to photo their truck looming over my Saturn. The colors amused me.
---------
Today (Friday) I went to the VA for the initial interview and blood draw from an Alzeihmer's study. I'm supposed to be a "normal control" but I suppose that'll depend on the results of the memory test.
I packed a whole lotta books at MITS, and there's a whole lotta lotta more to do. I'd like to get ahead in anticipation of a busy week next week but we'll see.
at 10:03 PM No comments:

ROUGH DRAFT – feel free to distribute but keep in mind it’s quite rough!
SUMMARY
I propose to help close the Justice Gap and the Lawyer Diversity Gap by creating a generation of public service, pro bono and low bono legal workers through a sufficiently large and systematic program to recruit, educate and support “Lincoln Lawyers” - attorneys educated by reading into the law.
OPPORTUNITY
Washington State has a program, authorized by its Supreme Court Rule APR 6 Law Clerk Program,[i] that provides for any college graduate of good moral character to apprentice into the law[ii]. Participants work as a law clerk for a “Mentor” and, at the end of the program, takes the same Bar Exam as anyone else. They then become a lawyer (a) free of the crushing burden of law school loans, and (b) actually knowing how to file a motion at a courthouse. A systematic recruitment and support of Lincoln Lawyer mentors and participants could create a stream of dozens of new lawyers a year committed to closing the Justice and Diversity Gaps – and financially able to do so by their personal efforts.
Lincoln Lawyer programs are economically efficient. The administration of the program through the Washington State Bar Association is entirely financed by the participants. Other costs are borne by the participants and the mentors. Expanding the program would require resources to plan, implement and measure success, but an organized effort to promote and support them can be developed very economically using modern social networking and management technology. It may be possible to prototype such a program through microfinancing programs such as Kickstarter.[iii]
Lincoln Lawyers can afford to provide pro bono and low bono services because they are not burdened by the costs of legal education. Indeed, participation in such services should be a commitment to their support in the enhanced program that I propose. Our recruitment goal would be nothing less than eventually to close the Justice Gap: an ambitious goal, perhaps, but the only one worth aiming at.
The best way to meet the long-term needs of an underserved group is to empower that group to ensure its own service. To the extent that groups that the Justice Gap spans those related to diversity issues, an enhanced Lincoln Lawyer program should be developed as to encourage their participation and therefore to leap the Diversity Gap. For example, tribal, rural and language-minority groups may be especially suitable for participation.

THE JUSTICE GAP
Among the systemic programs with America’s civil legal system are (A) a significant gap between the amount of resources needed to give all persons a fair shot at the resolution of legal disputes on the merits (generally in the form of legal aid) and the amount of resources actually available (the “Justice Gap”[iv]) and (B) a significant gap between the degree of diversity between lawyers and the general public (the “Lawyer Diversity Gap”).

Many efforts to close these gaps have been underway for years and just pride is appropriately taken for their successes[v]. The major elements of efforts to close the Justice Gap include voluntary Pro Bono efforts and legal aid funded by government, IOLTA programs, and charitable giving.

Why have these not succeeded in closing the Justice Gap? There is little need to discuss the political and economic reasons behind shortages in government funding. IOLTA funds, after surviving Supreme Court challenge, are greatly reduced due to the condition of the economy. Pro Bono efforts and cash contributions are limited by the economic necessities of running a law practice. Numerous exhortations to provide more run up against hard facts; in particular, law school loans can require payments of $500 or more per month for the first 15-30 years of a legal career. In addition, despite helpful clinical offerings, most law students graduate from law school, pass bar exams and are licensed to practice law without actual experience running a law office or directing the successful execution of a legal matter from start to finish; in a word in which half of all new business fail within five years,[vi] it is remarkable that comparatively few small law firms fail. The culture of law practice may also discourage practice in areas that are not fiscally remunerative[vii] which may discourage low bono practice.
No matter how many sincere and worthy calls for increased funding for legal services from the taxpayer and/or from the bar, there is no plausible scenario for closing the Justice Gap by conventional means alone. Therefore, we must grasp new tools with which to solve the problem. Several organizations have made various proposals for alternative tools[viii], but the one with the greatest potential seems to be overlooked:
‘Lincoln Lawyers” – attorneys educated by reading into the law, rather than an academic education – can close the Justice Gap and – not incidentally – address the Diversity Gap.
ROUGH PLAN
·         Set goal: close justice gap
·         Find institutional sponsor(s). Perhaps a consortium of Washington’s Law Schools would find this a useful adjunct to the Access to Justice programs; getting them involved early may mitigate their valid competitive concerns.
·         Address institutional hostility to the concept of the Lincoln Lawyer at the ABA, in law schools, in reciprocity rules etc. Perhaps comparing the misbehavior rate (e.g. disbarments) between the two types of lawyers may be helpful.
·         Recruit mentors. Perhaps some underserved organizations would be interested in supporting mentorship as a means of gaining a law clerk immediately and of addressing long-term issues.
·         Recruit participants, particularly among underrepresented or disempowered groups
·         Support, monitor and measure Lincoln Lawyer progress during and after program participation.
NEXT STEPS
This is but the start of a plan; it needs your thoughts. I plan to develop a social networking facility by mid-August 2011 for open and free discussion. I invite your comment, especially connections to any existing conversation that may be covering this base already. The purpose it service!
Randy Winn
http://lawyersforwarriors.blogspot.com
rewinn2003@yahoo.com
206-466-4677
[i]Washington State Courts. APR 6 Law Clerk Programs. http://tinyurl.com/74uy6

[iii] Kickstarter bills itself as the largest financier of creative projects in the world. Creating a Lincoln Lawyer program would be an unusual sort of project but could be structured within its rules.. http://www.kickstarter.com/help/faq
[iv] Legal Services Corporation.  Documenting the Justice Gap in America: The Current Unmet Civil Legal Needs of Low-Income Americans. 2005. http://tinyurl.com/2a76oh.(all legal aid offices nationwide are together able to meet only about 20 percent of the estimated legal needs of low-income people in the United States)
[v] Due to ignorance, I can say no more about the Diversity Gap, except that it appears to remain a serious problem.
[vi] Small Business Administration. What is the survival rate for new firms? http://www.sba.gov/advocacy/7495/8430
[vii]  Schlitz Patrick J, Money and Ethics: The Young Lawyer's Conundrum. http://tinyurl.com/3t2q5kg.
[viii] For example: Center for American Progress, Doing What Works. http://tinyurl.com/3hg3g86
at 8:43 PM No comments:


This week my brother Eric is staying with us, while he looks for a permanent apartment. He's gone working most of the time but it's handy having him around on weekends since he's an experienced carpentar. I had a couple of cabinets from MITS that I wanted to put up around the house, so when he asked if there was anything he could do around the house, I was set! He made short work putting them up; I'm sure I could have figured it out in time, but I am reluctant to mess with our plaster walls and Eric got both of them done pretty quickly.
It goes to show, if you want something done right, don't be a fool: get someone who knows how!
at 9:51 PM No comments:

We had such a good party Saturday that I didn't get around to writing about it until today.
We used to have potlucks all the time. We'd invite friends, former co-workers, family, colleagues from WSBA committees, and so forth, and always end up with an interesting mix of people. Everyone brings a dish and no-one goes hungry, and there are some pretty great conversations - after all, everyone has a nearly a party's worth of people who have never heard their best stories before!
We got out of the habit while in the process of buying this house. We were busy and (apart from a July 4th party last year) kept putting it off. This summer came so late, we kept delaying until the weather got dependably good; at last we decided it would never get dependably good, so I picked a weekend 3 weeks hence.
I honestly didn't notice that it was my birthday!
The impending party encouraged me to finish up some yardwork - mostly neatening up the detritus of a year. Kris and I hung a lot of our art all around the house. Two little cabinets that I'd been pondering how to put up in the house Eric managed to install in less than an hour -  proof that sometimes if you want something done right, don't be a fool, get someone who knows how!
Then we set out some food and sat back. People streamed in, food and drink flowed. Some friends were buying houses, so we all shared notes, advice and opinions. It got pretty busy there for a while but I think the head count included

We learned from the party to have the trash/compost/recycling bins better organized and I think I'll want to set out a much better pile of veggie starters next time, but mostly it went really well. People don't require much entertaining really - just the chance to meet some new people and talk. What a great (as it happened) birthday party!