A Most Eventful Fortnight 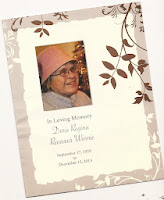 This past 10 or 14 days have been full of news and, as a consequence, underblogged. I've been too busy to write and yet much has happened that should be recorded.
Thursday December 5, 2013 I met my mother for the last time that she was fully conscious. She had two appointments coming up, that urologist appointment and then a holiday part that following Monday. I felt very busy, but then aren't we all? I decided that I would just take escort duty for both events but try to economize on time.
Usually with doctor visits, I met her at Bethany and rode with her in the van to the doctor and back. We would chat a little in the van but mostly it was about being there a little early and then, when we got back, I would wheel her to her room - she didn't seem to take lunch in a common room anymore. This time, feeling rushed, I decided to meet her at the doctor, and then have more time with her on Monday.
The doctor visit did not go as we had hoped. He was a kind man but quite clear and unwilling to b.s. her. The surgery she had had to deal with her condition had a failure rate of about 5%, and she was one of the unlucky ones. Another surgery could not be done because of her breathing and heart problems. All medications and the like had been tried. Her urinary issues were uncomfortable but not in themselves life-threatening, and she would have to simply live with them from now on. We talked (I mostly listened; I was there to observe and interpret as needed, and to be supportive) and eventually it was over. I pushed her out to the waiting area and we talked quietly until the van came, with its cheerful driver. Once she was on the lift, we hugged and had the usual quick kiss, and away she went.
I should mention that on the way into the building I pointed out some sort of winter-flowering evergreen. She wanted a closer look so we went over; she plucked some and examined the tiny flowers as we tried to figure out what it was. She was still alert and curious.
The next day I got messages that she had had a stroke. There was a lot of family running around and so forth, but basically nothing could be done as she was too infirm for strong medication. I visited her at the hospital and have no idea whether she recognized me, but she seemed to like to hold my hand. She seemed tired and after talking it over with the very kind nurses, we agreed it was best to let her rest. It's not about me, after all.
There was a family meeting (with various family dramas playing out) and ultimately her carefully considered wishes, as expressed in her DNR and at other times, was respected. It was not about us, after all.
On Friday, around 6 AM, Mother died. My brother Eric and my niece Stephanie were in the room; he tells me they were napping and when he awoke, he noticed she had stopped breathing. I believe she did not want a fuss, and to drift off in the company of family was the best way to go.
Saturday I had been invited to speak at a memorial for one of my clients, William Booker. I am grateful that I got a haircut because I was visible off to the side in the video (starting minute 1:30)
Kris was extraordinarily (although not surprisingly) supportive through the whole thing. This must be said and cannot be emphasized enough.
On Sunday, we attended a viewing, at which there were a great many stories about mom and our family. We're a lot of talkers!
Monday was the funeral mass at St. Mary Magdalen. I will say that, having attended several Catholic funerals, my expectations were very low; their formality and ritual were not very comforting to the family. The doctrine of "les orandi lex credendi" (as we pray so we will come to believe) is all very well for periodic rituals intended to inculcate and inform the faithful, but the purpose of a funeral is very different; most of the family and friends are neither believers nor interested in believing, but rather have their own spiritual needs to be addressed.  This Mass was different from my expectations. Much of this may be due to Ellen's choice of readings, of which more anon, and much of it was due to the priest, who gave a truly fine sermon. Basically he extolled mother's virtue of service, and challenged us to decide whether we wised to be like her in that. This acknowledged our feelings of loss, and gave us something to do with them. Well done father!
Susan did the second reading, and did a fine job with it. She's not a public speaker, but she let the microphone do its work and spoke clearly and well.
I had been asked to do the first reading, and was delighted to see it was the usual from Ecclesiastes. As I practiced I noticed two points.
The first is that the translation might have been fine for those who would be reading it over and over for wisdom, but it was lacking for this purpose: that of helping people at the funeral. The reading has a series of "there is a time for this and a time for that..." which is quite moving, than then there is an ending that ties it together. The problem I saw was that the ending used a dry and complicated language, which could be puzzled out over time, but the mourners were not going to give it that time.
The original language:


"God has made everything appropriate to it's (sic) time and has put the timeless into their hearts, without men's every discovering from beginning to end, the work which God has done."

This is eye-crossingly bad. Quite apart from the misspelling and the sexism, the structure of the sentence has so many interacting clauses that you really do have to sit down and puzzle it to get the meaning. It's a really GOOD meaning, but the emotional impact is completely lost in the dry processing of textual analysis ... quite apart from the fact that no-one present was going to do it.
For example, what does "their" refer to? If you work the problem through, it's the "men" in "men's" several words later and in an entirely different clause. This is mind-bogglingly bad. I understand that there is a faction in the Church that trumpets the advantages of such translations, because the more closely match the structure of the original language, but their attitude is stupid.
Truly, there is a time for literalism, and a time for paraphrasing. Thanks, Ecclesiastes!
I re-wrote the ending roughly as follows.


"God has given everything an appropriate time. Those things that are timeless, God has put into our hearts, without it being necessary for us to discover, to understand all the work God has done from beginning to end."

With a little more time, I would have sharpened this up a lot, but I think with worked well enough; at least, people said I did a good job and I think I got the point across better than if I had merely slavishly followed the dictates of officialdom (truly, being Neutral Good is more effective to being Lawful Good!)
(I also Yardbirded some of the "A time to"'s; e.g. "a time to reap" is infinitely better than "a time to uproot the plant".)
The second point is that the reading affected me, quite a bit. I was surprised by this, because in many ways I can be a bit standoffish with my family. I'm just not the talker most of us are. However, as I practiced the reading, I felt complicated emotions. Rather than try to analyze them, which was pointless under the circumstances, I just went with it. Sometimes you just have to let the wind blow and the water flow. While the emotions were not by themselves pleasant, being mostly something like sadness and loss, it felt good to let them power the reading. I think it made the reading much better than if I had held it all in and give a very formal reading.
The ceremony at the cemetery was well-organized and ended up being quite idiosyncratic. We all stayed to watch the coffin be lowered into the ground; for other funerals, the ceremony was over with the coffin above ground, which always seemed oddly incomplete. The lowering really did put an endpoint on it, and I think was comforting. When there's a pain, it's nice to have an end point.
We then lined up and put a little dirt on the grave. We instinctively lined up by age - didn't have to even think about it. There were lots of photos - we are a picture-taking family. And then Steve had the brilliant idea of a last cup of coffee. Mom never went without her coffee, black and strong. Steve brought out a flask, poured and passed it around. I had the idea of flicking one drop on the ground for the departed but his was a better idea - pouring the last cup into the grave for mom. Uncle Jerry, mom's youngest brother, poured the last cup.
The day was not over. This was Eric's birthday so what can you do? Mom would have wanted us to wish him happy birthday, so we sang it for him where she could hear. Then we left. Uncle Jerry had an early flight the next day, so Kris and I took him home (he was driving Dan's pickup, so she rode with him as guide, and took him the scenic route). We had a drink at Big Al's, a pizza at Proletariat, ice cream at Full Tilt, and then sat and played with the cats while talking. Late in the evening, Dan came by to firm up arrangements for the ride to the airport, and told us that at the afterparty, Steve proposed, Sheri accepted and Kristian officiated their wedding. So the day had a funeral, birthday and wedding all at once.
It was a full day. I say with all confidence that it will never be exactly repeated, from the beginning to the end of the world.
at 9:20 AM 1 comment: