At the Morgan Street Fair. 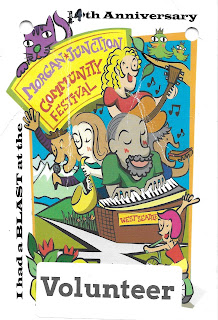 Saturday I went to the Morgan Street Community Fair to set up, recruited by West Seattle Time Bank friend Julie.
This is the second time lately that I've helped set up a community fair (the first being Delridge Days last year) and I like it. There's a lot of useful tasks to do and lots of nice people doing it, plus they survive coffee and you're outdoors. What else could you want?
I don't have the patience to sit around a fair all day, so I went home and did a few choirs. Around noon I came back with Kiara and we toured the fair, lunching on truck food. We especially enjoyed the Bark Of Morgan Dog Parade. 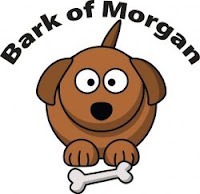 I talked with librarians and books sellers. I met a couple of candidates for City Council; it may be difficult to choose between them but at least I know a little more about them.
I returned around 3 to help with the set strike. The leader of the dog parade let me strike a pose.
I recommend community fairs. They're a fun way to meet your community. Helping out with set-up and take-down is another way to do something useful while making conversation. 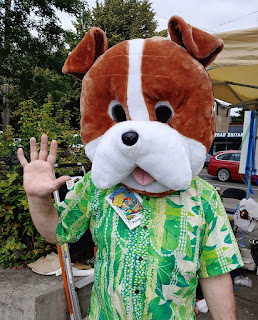 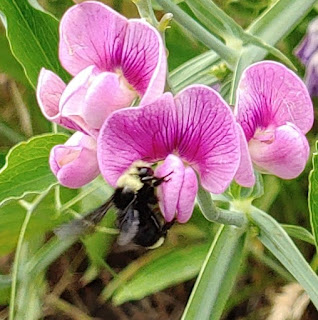 I wasn't sure how to write this joke.
It's a bee and it's a pea (well, a sweetpea). "BeePea" sounds funny but looks distracting. "Bee-Pea"? "BeeP"?  Finally I went with what's the shortest but distinguishes between the two elements so hopefully people will piece it together themselves. I don't really understand humor!

None of us look our best in super close up! 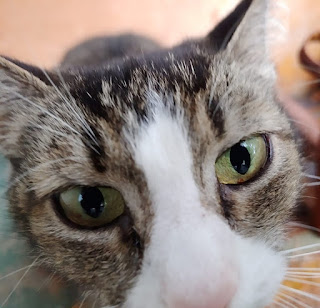 Julie Greminger Reed Is this what you see first thing in the morning? Is someone trying to tell you and your opposable thumbs to get busy with the food?

For those who don't know: This photo  is Imp (Impromptu Underfoot Winn) who is a cute and loving cat with normally-proportioned features but does love to remind me that the most important meal of the day is Cat Breakfast!
at 6:30 AM No comments:

Ghost Writers In The Skype 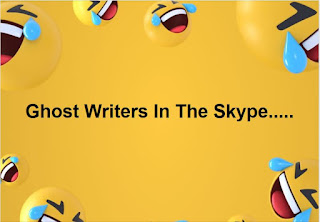 I was just phone interviewed for a short bit in a department publication, to be written by them and attributed to me. We tried using skype at my workstation but couldn't figure out the audio. Instead, I went in the hall and talked on cellphone.
The article is a followup to a comment I'd made about how it is easier to downsize if you give things away with purpose. I've found the "Buy Nothing West Seattle" Facebook group most useful for this, but also use consignment stores, general gifting, thrift store and library donations, etc. The key point is that I am not merely getting rid of some part of my life but actively repurposing.
One thing I've learned from Toastmasters is that speaking goes better if you're prepared, even and especially if you don't stick to the text - it's just a launching pad. I drafted an article on repurposing before the interview, so the interview went really well - I mostly repurposed the article. The interviewer will write it up any way he wants but seemed impressed at how well I spoke, how quoteworthy were my comments. Well, I thought, they should be good; I worked on them haha!
Later, I thought skyping ghostwriters was funny and posted the meme on Facebook. It got a few laughs but seemed to be a bit esoteric for most. Ah well, they can't all be Top 10. Trying out material is how you learn about comedy!
at 6:16 AM No comments: 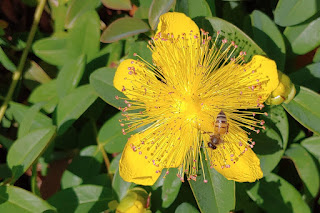 Some years ago I was offered superpowers on condition I would use them only for good.
"What sort of superpowers?," I asked.
"You will have the strength of three men," they said.
"You know what else has the strength of three men?" I said. "Three men. Not impressed!"
"You will also have super martial arts skills, capable of defeating any non-super-powered human in hand-to-hand combat."
"Great," I said. "Do you know how many criminals carry guns these days? What about mace or tear gas? Will the powers work if my eyes are swollen shut?"
"Ok, we'll throw in bullet dodging. That's sort of a super martial art anyway."
"How does that work against a shotgun? or a machine gun? or grenades? I don't want to encourage escalation that's doing to put at risk everyone around me!"
"That's where the flying comes in. You'll be in the air most of the time, not next to innocent people."
"Flying sounds nice (especially if I don't have to check my stuff through TSA) but do you have any idea how complex the airspace is around Seattle? There's SeaTac Airport, King County Airport, Renton, Everett and the seaplanes taking off from Lake Union. I can't talk to all those control towers AND fight bad guys at the same time!"
"You want radar invisibility too? Is that it???"
"I'm not sure that's a good idea. I don't want to get run down by a 747 that can't detect me."
"How about the Quick Thinking/Improv superpower? You'll always figure out a way out of a jam."
"That sounds pretty useful at work, and on Friday nights."
"But you are the Chosen One! You must accept this power to fight crime!"
"If I wanted to be a cop, I would have gone into Criminal Justice. If I'm going to be a walking, talking bundle of lethal force, don't you think I should have a firm grasp of my legal limits? I'm sure there's a lot of Use Of Force classes I'd have to pick up and I don't have the money."
"We have a payment plan."
"OK, ok. Let's talk."
at 12:00 PM No comments: