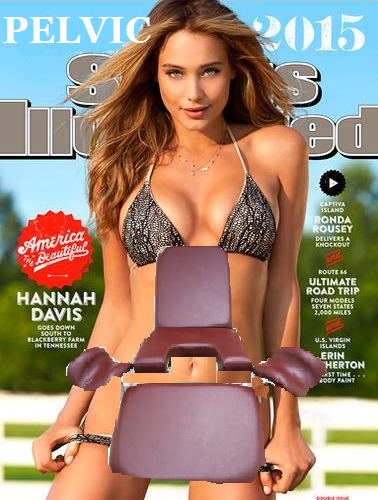 The world's leading entertainment magazine, Sports Illustrated, announced today that it is following up its success with the 2015 Swimsuit Issue with a Pevic Exam Issue.
"The annual Swimsuit Issue has always been a cash cow for us," explained SI owner Jack Emoff. "And our recent cover featuring a woman displaying her shaved mons veneris has been empowering to all women who make money from their bodies. "
"But our readers have been complaining. 'Too much swimsuit!' they said. And it has been a struggle, finding ways to display the female figure with those bits of cloth in the way. So we'll give our customers what they want. And rest assured that it will be sports-related, because isn't women's health is an essential part of women in sports?"
Pundits applauded this move. "I've always enjoyed Sports Illustrated," said Domincan sex tourism expert Rush Limbaugh, "But it mystified me why they covered up the lady parts with bikini bottoms or an artfully placed horse. That was just more political correctness from the liberal thought police."
Montana Republican legislature David Moore disagreed. "If you show female nipples in public, what next? Male nipples? Yoga pants? I submitted a bill making those illegal, and I hope Sports Illustrated would join me in my crusade to get Olympic boxers to wear t-shirts. They're disgusting - and yet strangely exciting."
There was even support from surprising quarters, as the American Family Association applauded the prospect of an issue of Sports Illustrated featuring unclad women displaying their lady parts. "Porn has always sold well in parts of the country dominated by religious conservatives," explained a spokesman wearing a male burka. "The sale of millions of copies of this magazine stimulates our public economy was well as our privates."

In The Botany of Desire: A Plant's-Eye View of the World

, Michael Pollan describes how plants get us to move them around by providing us with things we want: beauty, sweetness, the alteration of our mental states.

I am part of this. A neighbor down the street divided their Red-Hot-Pokers and left them on the parking strip for free. I planted some and they are wonderful!  My sister is coming by to pick up a few for her home across the Sound. The rest I will set next to my Little Free Library surely they will be throughout the neighborhood in a few years.

Likewise, a friend gave me some periwinkle ("vinca minora"). I love this simple ground cover because you don't have to mow it - my goal is to zero out my mowing needs, and the vinca is a massive help. It doesn't need watering either, perhaps because it's a native and used to our seasonal cycles. The flowers are a plus!

And it's completely steppable. I grew up thinking that only grass can be walked on, so it seems a little odd to step on broadleaves, but seriously - it doesn't hurt them, in moderation, and it doesn't hurt me. Finally, it readily propagates. I have a space in front of my house which is basically the nursery. Every couple of months I thin it and put the culls into another part of the yard, where they root and displace grass. Recently I have started planting them in buckets (...free from the recycling center!!!) for easier distribution to family and friends. One tip: punch holes in the buckets so they drain the rain: vinca is versatile but it can't swim!

One of my first purchases when I bought this house was a mower. I tried to be environmentally responsible and get an electric mower, but it is still a waste of time and space when, with a little care, a mowless yard can be had from nothing but the patience to propagate the right plants.

And the plants nod knowingly; we serve them well.

"Our vegetable love shall grow
Vaster than empires, and more slow".

-----
I was inspired to write this by this week's Change The World Wednesday Challenge:


"This week, consider hosting a seed swap. Invite some friends and ask everyone to bring organic seeds to trade. If you'd rather not host a swap, investigate swap parties in your area and participate (it's a great way to get to know neighbors and other gardeners). Or, start a seed library by organizing seed donations and making them available to neighbors. The idea of this challenge is to share seeds in a fun, creative way."
I love seed swaps, but plants swaps are fun too!

Monday during zumba, Tall Joan was stretching at the barre and apologized for blocking my access to my water bottle. I said no problem, for it was indeed no problem - everyone has to be somewhere! - and I mentioned that I enjoyed the barre class at the Fauntleroy Y. It's very difficult but also satisfying. She suggested I check out her friend's classes at the building across from that Y.
Wednesday, after picking up a little dinner at Eat Local (...if you're going to have prepared food, this is the place to go!) I investigated. I'd never been in the Fauntleroy Community Center before, and it is an interesting building - perhaps a repurposed school, with lots of rooms and corridors. The most obvious meeting was the 34th District Democrats, where I saw another person who did a lot of classes at the Y. We chatted a bit and I will try to make the next meeting; I'm not really set up to add that to my table yet, but who knows. I tried the middle part of the building where there was a pack of sweaty teens and a dad; he directed me to the end. There, by a small neon sign saying "dancing", was a dance school. I talked with the manager and got the brochure. They have adult classes and I will think about this next year. My exercise card is full right now but I am growing!
I enjoyed the process of exploring; it reminded me of so many little explorations I have made in the past. I need only figure out how to do more of this in the future.

Most of Monday I spent at the VA hospital, having a battery of memory tests. There wasn't any poking or prodding, just lots of forms to fill out, questions to answer, and so on. The questionnaires on medical history and injury felt helpful in reminding me of some healthy habits that I could renew or revive, such as walking on days on which I don't formally exercise.

The afternoon memory tests included some attempts to make them part of everyday behavior. There was an exercise in looking at things in the yellow pages, using a laminated yellow page, and we joked about how that test might suffer in the future from the disappearance of that institution.
There was a card game involving detecting rules in force in the context of changing rules. For cards were laid out, each with a difference symbol shapes, quantity and color. The game was to place a new card next to a stack and get the response correct or incorrect. At first I matched by number, which was correct. Then after about 7 placements, the rule changed. In retrospect, I don't know whether there was a set run of rules, or whether the gamemaster simply changed the rule every so often. Each time there was a rules change, I guessed that the next rule would be one that we hadn't done lately, and thus, other than each initial rule change incorrectness, I got no incorrectness at all!
In contrast, I feel I did poorly on the games that were watching a screen and hitting the bar immediately if the small picture was of a city but not of a mountain. To keep up the pace I hit the bar quickly and, it seems, before I really figured out the difference. The photos look very different when you look at them, but somehow when you're in a hurry, the urge to respond is faster than the pattern recognition, it seems. I had the same problem with a similar game involving showing letters.
I did pretty well with a game involving the use of symbols substituting for Arabic numerals. In fact, in the second such game - involving writing the Arabic number for each symbol, I nearly got to the last row of the form and in the final game - involving speaking the Arabic numbers for the symbol - I finished off the page. The investigator said she had not seen that before.
---
After the experiments, and reminder of the next move (the PET scan) I brought up recruitment. They said that there was no organized recruitment for experimental volunteers, and that getting volunteers was an issue. I think this is something where VAF can be helpful.
---

I was sure to get to Zumba that evening. It's my favorite exercise, and I get a lot of positive feedback which is healthy in itself. It was kind of funny last week when one of the women with whom I'd had occasional conversation - and whom Kris had said was flirting with me - mentioned her husband. I hadn't seen a ring, but I had mistaken polite, happy and normal conversation for flirting. Well, that's a lesson that it's never too late to learn. Anyway, I'm just dancing and having fun, and that is enough.
One dancer, with whom I was discussing the Saturday barre class, suggested I check out the barre class across from the Fauntleroy Y on Wednesdays. I am perpetually worried about finances, but I get so much from dance as exercise that I will think of this as an investment.

Tuesday I started with a plan and got at least halfway through it before a new opportunity popped up. Actually, it's not so much a new opportunity as the ongoing operation of an existing procedure. Now that Half Priced Books has put the VA Hospital on its list of charities to help out, they periodically call Cyril for a pickup. It doesn't take long for me to do this, because they are just in Tukiwila. There is a danger in going into any bookstore, of course, since they are full of books(!), but it was still daylight when I got out of there and I enriched my life with some new stories, so no harm done.
---
From yesterday's testing I was reminded of the health benefits of walking half an hour every day that I don't do other exercise. I decided to get my walking in by carrying my thrift store donation instead of driving. It was really a pleasant walk, marred only by the store being closed. This just means I can do the same thing Wednesday or as needed. Meanwhile, I got a look at the neighborhood and was reminded of some sights I hadn't really seen for more than a year.
---
In the evening, I cooked the salmon from Saar's. I didn't do anything fancy, since salmon is intrinsically good as is. When Kris came home from the Y and brought me the junk mail, I offered and she accepted some salmon. It was a friendly interaction, although she did remind me about doing the taxes.
---
I got a call from the chair of DAV 23's Finance Committee, asking if I'd ask the Treasurer for a copy of the inventory of the bequest. I suggested that he ask directly, but the two of them don't get along. I was treated to an explanation that the Chair was not trying to enrich himself, just trying to help veterans. I composed a short email while we were on the phone, read it, and sent it.