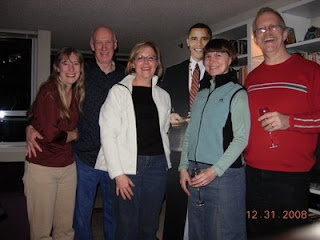 Kris & I really enjoyed the quiet party at Jeanelle's, especially meeting her friends Julie, Kevin and Barack!
at 11:30 PM 1 comment: Links to this post

Change.org (the non-governmental alternative to change.gov) has started a rather interesting and important blog: Sustainable Food.

Change.org has a variety of other blogs on important topics, but this one caught my eye because of my interest in developing Sustainable Belltown. By coincedence, the 1st entry I read was "Saving Antibiotics" ... a subject dear to my eye due to a recent bout with MRSA in my lower eyelid ... something that was as unpleasant as it was unsightly.

We all have to eat (...and most of us will need antibiotics to continue working for the foreseeable future)! Let's make sustainable food policy a priority. See http://food.change.org/
at 1:57 PM No comments: Links to this post

I am amused by the continuing attempts to link Obama to scandals in Illinois & Chicago. But there's plenty left to investigate:

The band Chicago: was Obama involved in this scandalous footage featuring a half-naked drummer?


Did Obama influence Michael Jordan (who left Chicago to play for Washington DC !!!) who was caught on tape involved in over ten personal fouls!:


Obama wears black socks and the Black Sox were from Chicago.

Judge Mom and the Tabs

Today I went to court for my hearing on my car tabs ticket.

As I wrote before, I got ticketed while beershopping because I hadn't renewed my tabs. On the ticket., it mentioned the possibility of a mitigation hearing, which sounded good to me. First, anytime I can put off paying is a good time, and second, I really didn't get a notice of renewal, and third, talking to the judge on this would be a new and interesting experience. So I got an appointment: 8:30 Dec 29.

I figured I'd better prepare for the show. From community theater, I understand that I'm not good at memorizing precise lines, but I am pretty good at memorizing themes and extemporizing from that. I worked out three reasons for mitigation: I hadn't gotten the notice; while in theory I could've seen the tabs every time I got into my car, in practice people don't notice things like tabs since they don't change; and most of all, owing to the smallness of my present income, a reduced fine would be just as motivating as one that took a whole week's discretionary income. I pondered which would be best going first. The strongest first? in case the judge cut me off? or the most emotionally appealing?

I really over-thought the whole thing.

I got to court before the building actually opened; the helpful guard mentioned the coffee-and-bagel place in City Hall across the street. As I worked over the bagel, I realized that my reasons were bogus. I didn't think the law had a "no reminder" clause. Maybe I'd be better off just coming out and admitting it. Maybe I should just skip the hearing. But, no, the scheduling form said a missed hearing might get me socked with an additional fee.

The waiting area was a plain room with two clerks with computers, lots of chairs, and art on the wall: two character photos and a mysterious yet boring abstract painting that was probably designed to lulled distressed persons into torpidity. Behind the counter, talking to the clerks, was the very image of a TV judge out of his robes: perfect white hate, sharp eyes, very neat goatee, a commanding presence. There would be a quick argument before the High Bench, to the point, and (I imagined) crisply decided, just in time for a commercial break.

A short, motherly woman in a suit emerged, called my name, and lead me down the hall to a plain office with a modern desk, plain, except for the cool double-flat-screen monitor. She wasn't Judge Goatee's clerk; she was the Judge herself. (Technically, a Magistrate but why quibble?) I wasn't going to be on Court TV; I was going to have a talk with Mom.

With mom, there's no arguing. Come right out and admit it when you got nuthin'

She took a form and, in a calm, friendly but serious voice, asked:"Are you here for a hearing about your car tabs, citation number *something*?" (I'm paraphrasing from memory)

"And what can you tell me"

"Your honor, I got nuthin'" (... that got me a small smile ... maybe it pays to be honest!) "I asked for this hearing because I hadn't gotten the reminder which is the only reason I hadn't renewed my tabs, but thinking it over, I know that doesn't really matter."

(Nodding in an understanding, Motherly-ly way): "You didn't get the reminder".

"Yes, although I know it's still my responsibility. I was also upset because the ticket is a lot for me right now, I'm out of work. But I know that's not really ..."

(Understandingly): "Yes. The amount of the ticket is set by the City Council. I can mitigate it to $124"

"Thank you." (I realized that she was stating the law)

"Do you have your proof of tabs?"


(I shuffle through papers.) "Here's the inspection, I had to get the oxygen sensor renedo."

"It would be a green form"

(Mentally cursing myself) "Oh, I don't have anything green. I did put the tabs on."

"I'll assume you did get your tabs." (Hey, it really does pay to be honest!)

"Now, I am authorized to arrange monthly payments."
(I can hardly believe this. The fine cut AND payments stretched out? But ... many of the people who come in here are really badly off. I am not badly off. I needed the reduction, but it's best not to take more than I need.

"No thank you, I'd like to take care of everything today and be all organized."

"Ok, take this to the counter."

Lessons learned:
First, I noticed that when the judge wasn't asking questions, she was mostly just making a plain statement of the law ("The City Council sets...", "I can do this ..."). That's pretty interesting, because it really doesn't admit of much argument.

Second, I worried way too much. Once I accepted that I was probably going to get nuthin' cuz I really had nuthin', the process was enjoyable if only for the learning, and the meeting new people. Judge Mom was cook.

Finally, DO pay your tabs on time!
at 9:45 PM No comments: Links to this post