Tonight at a convention after party I danced like a madman, making men half my age look slow --- it's all due to three years of Zumba Del Reema Rafii. Thanks buddy!!
at 11:30 PM No comments:

On the lap or on the laptop 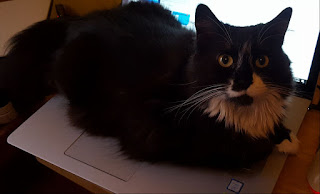 Ginny loves to sit on the laptop. Maybe it's the warmth (although I can't tell if it's especially warm) or maybe it's just the feel of the keys as she lies down.
Picking her up must be done carefully because she instinctively closes her claws and they are just the right size to pop a key off! If I pick up up at any speed at all the key goes flying anywhere; fortunately they pop right back on. It's an unusual defense against being deprived of a chosen resting place, to be sure.

We are all the lead character in our own mini-series 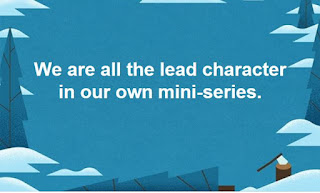 SkyTruth is a great source of information using publicly available aerial or satellite images! https://skytruth.org/
at 3:39 PM No comments:

Imp was my gateway cat 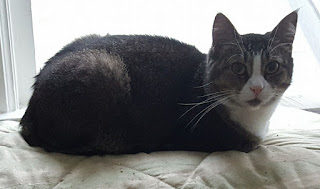 A Weekend of Planting

Friday I drove Kiara to the airport, then took the bus to work. The rest of my weekend was cleaning and planting (with barre on Saturday, of course). Instead of participating in the local garage sale week and adding to my possessions, I found a home for the piece of pink granite and posted for sale some surplus items here.
What I most enjoyed was planting. I planted the lilies I'd gotten to cheer the place up. I planted miniature yellow roses that I stumbled across while shopping groceries. But best of all, I planted the giant sunflower seedlings that I'd started from seed. I like all those plants but I especially like the ones I start from seed! 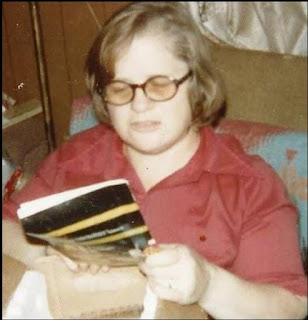 MY MOTHER used to tell me the same story on every birthday of my adult life.
"It was a hot Saturday morning in July," she would say, "and seven of us women were going into labor all at once. At the time, Providence Hospital in Everett was much smaller, with only two birthing beds. One of the women was having twins, and another was a teenager who had never seen a doctor, so they got priority. It was the weekend so they were short staffed and the laundry was not open, but we got by.
I was waiting in the prep room with a nurse when you decided to come along. You wouldn't wait so she helped me. A little while later the doctor came along, counted your fingers and toes, and signed the certificate. You have always been in a hurry!"
I loved that story and I loved my mom. Happy Mother's Day! --- COMMENTS FROM WHEN I POSTED THIS ON FACEBOOK: David Winnie: I, on the other hand, took my own sweet time, making Mom go to the hospital 3 times in May thinking I was ready to make an appearance. She almost DIDN'T go to the hospital when I did decide to be born, as Dad had an appointment in Seattle. Once they got to the a Prov, I only took about 45 minutes, so Dad made his appointment. AND won free lunch at the J.C. Penny's lunchcounter, a hotdog and a coke. Always told me if he knew he was going to win lunch, he'd have ordered a steak. --- Susanne Howard: Mom always told of how she thought I was going to be still borne. Dad just dropped her off at the hospital and.left. She let me know how sick she was with her arm tied to a board so they could give her an I.V. She had to turn her head to vomit off the bed onto the floor. Mom always reminded m e that I was trouble from the start. Here I am some 60+ years later. Still living life to the beat of my own drummer. --- Pamela Palombi McCollum: Great story, Randall. Hang on to that one. My sister was born there almost 50 years ago. We lived a block away. My mom was “old” back then, just turning 40, when she had her. The nurse asked her if she was having her own grandchildren!! I was 16 and thought it was hilarious. My mom was soooo mad...
at 4:31 PM No comments: 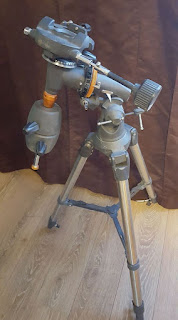 Sometimes when I intend to sell something and I don't want to go through the bother of connecting my camera to my laptop, I upload the photo to FB, save it to my laptop and then delete it. In this case I had a telescope mount I didn't need (and hadn't found the accompanying telescope yet) and was just rushing through posting it. However in the time between uploading the image and going to the laptop, the image got some comments. I ended up conversing with people about this and deciding to hold on to it haha!