Feb 10/Web - From Crisis to Opportunity: Human Rights in Egypt and Beyond 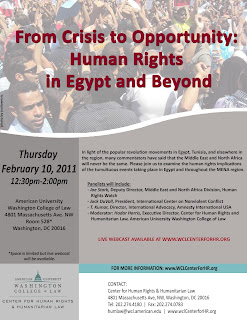 In light of the popular revolution movements in Egypt, Tunisia, and elsewhere in the region, many commentators have said that the Middle East and North Africa will never be the same. Please join us to examine the human rights implications of the tumultuous events taking place in Egypt and throughout the MENA region.
Title:
From Crisis to Opportunity: Human Rights in Egypt and Beyond

LIVE WEBCAST WILL BE AVAILABLE AT http://www.wclcenterforhr.org/

This event is part of an ongoing series of Rapid Response Events organized by the WCL Center for Human Rights and Humanitarian Law to provide a platform for discussion of time-sensitive events around the world that have an impact on human rights.

And thank you to Marti Schmidt of the WSBA World Peace Through Law Section for alerting me to this event!!

Orange You Glad You Didn't Snicker?

I've loved Snickers all my life.

Well, actually, I love the memory of my first Snickers bar: so chocolatey, with the sweet caramel and the nutty underlaying taste. I must have gotten one on Halloween, so long ago, and it totally pegged the DelightMeter.
But lately, Snickers has seemed kind of ordinary. I'll see Snickers, and feel a mild desire, but when I'm done, it's just not the same. The delight is not in the Snickers, but in the feelings we had when we were first together.
Intellectually, I know Snickers is bad for me. She's a bit pricey, and empty in the nutrition department, and always shows up wrapped in a bit of garbage that I can't even compost.

I wanted to blame her progenitors for raising her wrong. I thought that probably the Mars Company must be using cheaper chocolate, cutting corners on the peanuts, something that has interfered with our relationship!
But no, that was just fooling myself. I've talked it over with Snickers.


"It's not your fault, Snickers. You haven't changed. It's me.
I'm not a child anymore, enjoying my first insanely good mix of chocolate, sugar and salty, oily protein. I've grown, while you've stayed yourself.

I think we need to spend a little time apart.

Ok, I owe you some honesty. I've found someone else. It's Oranges."

I've known Oranges since preschool, but I never appreciated her. Back then, she was chubby and tasteless, and even a little bit embarassing. My mom always put an orange in the toe of our Christmas stockings, and we never understood why. We would dutifully roll them out and stack them with the pile of other gifts, and they alone would remain unopened. Eventually they'd disappear, I never knew where. I imagine late at night my mom feasted on the Christmas oranges her children never consumed.

The thing is, back then, I couldn't get past Oranges's tough outside. The promise of a sweet inner life I just couldn't appreciate, especially when there was Snickers, who was, to be blunt, a little bit easy. I could just peel off Snicker's wrapper, like you saw on TV ( Oranges was never on TV! ) and Snickers was ready.
But today, Oranges seem so much more. I've read that the smell of citrus actually improves our behavior ( ... as reported in the noted science magazine "Cracked" ... .) Oranges come in her own packaging, that can be fun to remove slowly, carefully, gradually exposing the sweet, soft but firm, rounded delights ... ). And the health benefits of Oranges, as compared to Snickers, helps me put off the day that I'll need a prescription for blood pressure or diabetes or hairy kidneys or something.
Perhaps I've change biochemically. Oranges just seem to taste better these days. Maybe the foods that an adult enjoys are different, or maybe the breeds of oranges have improved. Either way, the time has come to make it official: I've broken up with Snickers. We've just been coasting for so long out of habit; I can just move on and I won't even miss her. I changed my Facebook status from "In a Relationship with Snickers" to "Snackatetically Single" and ... this stung a little ... unfriended Snickers.
I will miss the time we had together, the joy of Halloween candy, but I take comfort in knowing I can still enjoy the memories. And I will make new memories with Oranges!

Maybe I'll start by asking my mom what happened to all those Christmas oranges!
=========

Today's thought was inspired by this week's Change the World Wednesday Challenge:


February is being chosen by snack food manufacturers as "National Snack Food Month". That means that unhealthy snacks will be unusually promoted and consumers will be encouraged to buy them. Processed foods, especially snacks, are bad for us and bad for the planet. So, let's reclaim February for the good food cause. First, visit #28ate to get the facts and then, participate by taking at least one of the actions they suggest. Come back here and tell us what actions you're taking to support healthy food.

P.S. I wrote a while back on why a bag of oranges is a great thing to keep in the car. It makes Oranges as convenient as a Snickers, and it facilitates simple charity. Try it!
at 9:12 AM 1 comment:

As it approaches its tenth year, our nation’s longest war is showing signs of waning. Meanwhile, our soldiers are falling apart.

Jennifer Senior writes:
"Even at the lowest point of the Global War on Terror, in April 2004, say, when the number of casualties was spinning out of control and it looked like there was no end in sight�morale among our troops ran fairly high. Yet today, with casualties tapering and a slightly improved prognosis for stability, our troops, by every conceivable external measure, are falling apart. Veterans of the Iraq and Afghanistan wars make up a disproportionate number of the jobless; the Army’s divorce rate, which used to be lower than the civilian population’s, has surpassed it and is higher still among those who’ve deployed. A spokesman at Fort Drum, home to the 10th Mountain Division here in New York State, tells me by e-mail that one-quarter of its 20,000 soldiers have received some type of behavioral health evaluation and/or treatment during the past year. Defense Department spending on Ambien, a popular sleep aid, and Seroquel, an antipsychotic, has doubled since 2007, according to the Army Times, while spending on Topamax, an anti-convulsant medication often used for migraines, quadrupled; amphetamine prescriptions have doubled, too, according to the Army’s own data. Meanwhile, a study by the Rand Corporation has found that 20 percent of the soldiers who’ve deployed in this war report symptoms of post-traumatic stress and major depression.The number climbs to almost 30 percent if the soldiers have deployed more than twice.

"I feel like people with my symptoms are becoming the majority of the Army," says a major from the New York area who recently started taking Effexor, an antidepressant, and a variety of sleep meds after a second tour in Iraq. "Feeling anxious when you don’t have a reason to, being a little depressed, having low-grade anhedonia, not sleeping well, this is the new normal for those of us who’ve been repeatedly deployed."

The Army’s own research confirms that drug and alcohol abuse, disciplinary infractions, and criminal activity are increasing among active-duty service members. Most ominously, a growing number of soldiers can’t handle the strains of war at all. Until three years ago, the suicide rate of the Army, the branch with by far the most men and women in this war, was actually lower than the American population’s - a testament to the hardiness of our troops, given that young men with weapons are, at least as a statistical matter, disproportionately prone to suicide. But in 2008, the Army suicide rate surpassed that of the civilian population’s, and the Marines’ surpassed it shortly thereafter. So grim is the problem that this summer, the Army released a remarkably candid suicide report. "If we include accidental death, which frequently is the result of high-risk behavior (e.g., drinking and driving, drug overdose)," it concluded, "we find that less young men and women die in combat than die by their own actions. Simply stated, we are often more dangerous to ourselves than the enemy."

For most of the past decade, the Army has downplayed the collateral damage this war has had on our soldiers’ nerves. Until The Nation brought the practice to light last spring, the Army sometimes assigned the label of �personality disorder� to those suffering from post-traumatic stress, often rendering them ineligible for disability; Warrior Transition Units have continually earned harsh scrutiny, most recently from the Army’s inspector general himself. Under the direction of Peter W. Chiarelli, the four-star general and vice-chief of staff, the Army has at least made an effort to lend some transparency to its troubles and to address them more aggressively. The problem is that the Army woke up to its mental-health crisis quite late, and the more closely Chiarelli looks into the issue, the more confounding it seems to be to solve.

For starters, the United States has never had an all-volunteer corps of soldiers who’ve spent a whole decade in battle - men and women who, by turns, have repeatedly subjected themselves to the horrors of war and the trials of reintegration back home. "Don’t ever underestimate what three, four, five deployments does to you," Chiarelli tells me this November, as we fly down to Fort Stewart, Georgia, whose 3rd Infantry Division was just returning from Iraq. "It’s uncharted territory, as far as I’m concerned." Even without repeated deployments, the life cycle of a soldier is a model of brutal compression and, therefore, almost certain to cause distress. "At 24 years of age," says a striking footnote on page one of the Army’s suicide report, "a Soldier, on average, has moved from home, family, and friends and resided in two other states; has traveled the world (deployed); been promoted four times; bought a car and wrecked it; married and had children; has had relationship and financial problems; seen death; is responsible for dozens of Soldiers; maintains millions of dollars’ worth of equipment; and gets paid less than $40,000 a year."

Now consider what happens when this cycle repeats itself for a decade.


"Moving, divorce, death, financial turmoil," says Lily Burana, author of the memoir I Love a Man in Uniform. "Those are the top stressors in a life. And this is what you get every freaking year in the Army."

Today's Facepalm: Our geographically dispersed group of volunteers wants to use social media to discuss current issues; it's especially important to have internet-accessible archives for newbies to consult.

We asked the paid staffer assigned to promote social media to help us, but she wanted to see a plan first. To create such a plan we needed a venue through which to discuss it, which would seem to suggest using a simple social networking facility, such as a facebook group or at least a listserve.

Not to the "Social Networking Specialist". Rather than even try some form of social networking facility, she insisted Our geographically dispersed group of volunteers wants to use social media to discuss current issues; it's especially important to have internet-accessible archives for newbies to consult. We asked the paid staffer assigned to promote social media to help us, but she wanted to see a plan first. To create such a plan we needed a venue through which to discuss it, which would seem to suggest using a simple social networking facility, such as a facebook group or at least a listserve.

Not to the "Social Networking Specialist". Rather than even try some form of social networking facility, she insisted "I've had success over email and by phone meetings".

Look, it's not that hard to set up a simple social media forum with which to discuss the building of something more permanent. Unless, of course, you're paid to do it!
at 12:25 PM No comments: