Our 2nd cistern came in an eye-pleasing green that happens to match our house trim. Why not be stylish?
I'll have more information later on this later, but basically we passed the inspection so it's all over but the paperwork ... plus ordinary maintenance over time.
Half of our roof drains to this cistern, the other half to the black cistern which is in the back. Overflow goes to the rain garden via top black pipe, and during the rainy season there's a restricted flow valve (blue handle at the bottom) for a slow release to the garden.
This project is part of the Seattle Residential Rain Wise Program. Seattle has a big runoff problem and part of the solution are tiny public/private partnerships like this - the utility gets stormwater control, the homeowner gets free water! It looks a little industrial right now but the jasmine (far left) will grow over it in about a season.
More About Seattle Rain Wise program.
at 1:36 PM No comments: Links to this post

Thoughts On Family Members Getting Ripped Off By Used Car Salesmen

In the past little while, I have seen 3 different family members buy used cars. Each fell in love with something nice looking, and it ended up costing them. There's a pattern here ...
Maybe it's just too hard to admit that most of us are AMATEURS when it comes to buying cars, and going up against PROFESSIONALS at selling them.
Life is not a movie. When amateurs go up against professionals, they might win once in a while, but that's not the way to bet.
When we bought our house, we viewed at least 3 house a week every week for six months. This was essential to learning to playing the game. Why should buying a used car be any different? If you haven't looked at 20 or 30 cars on at least 10 different lots, you haven't learned the game.
"If you look around the table and you don't know who the patsy is ... the patsy is you."
at 8:29 AM No comments: Links to this post

The internet makes us funnier and smarter! A thought that might have taken all day to circulate among a few friends can now make it into the world in a few minutes. There it competes with a gazillion other thoughts, and a ideally a few of the best ... or at least of the funniest ... bubble up to the surface!
This morning, I glanced at an article about the KKK and noted someone's comment that they had sheets for brains. This struck me as apt and funny; it expresses a truth compactly and surprisingly. A quick google search didn't find a whole lot of prior funnys on that subject - I'm sure it's been said before, but there was room in Ideaspace for me to make a my small contribution.
The concept boiled down to three short words: "Sheet For Brains". I chopped out everything unneeded, even the plural on "Sheet", so that the result would be more quick and economical.
Usually I work on in MSPaint, because it's free and easy. If I did this for a living I suppose I would go buy something but so far Paint has been enough; my hangups are almost always about ideas, not about tinkering with the images.
To illustrate the idea, I searched for things that communicated the idea "I'm KKK And I'm Stupid". There was an awful a lot of material, but most of it was old black-and-white stuff; I wanted something more contemporary. This is where figuring out how to search on the date of an image might be helpful.
Picture #1 had some interesting hate flags in the background but I think they just complicated the idea; also use of the cross by racists is really abusive and I didn't want to contribute to it.
Picture #2 had a cop watching the fools as was his job; I couldn't airbrushed him out but it was more work than I needed.Another problem with #2 was figuring out the color for the text, since the natural space to put it on had several different background colors.
Picture #3 has a couple of really stupid looking Klansmen; the one of the left just looks completely clueless and the one on the right looks resigned to his fate. AND the text fits between them nicely, so we take in the words and the image at the same instant! Too often, I have to use a caption above or below the image, or word balloons, all of which have their place but they change the pace of the joke.
Once I settled on the composition, I signed it "rewinn" real small; I don't want to mess with the joke but I am also vain enough to want credit, however hidden it may be!
The next step is to put it out there. Often I save the image in two sizes: 300 pixels wide and 500 pixels wide. This is because Facebook seems to present images posting opportunities in those two sizes; if you put a 500 wide image in a 300 wide area, the sides appear cropped.
I posted the image in a few likely Facebook places - it's important to go only to groups where you've been invited, and where people will appreciate the joke; spamming people will get you banned and you'll deserve it!
I also post this item into my Flickr stream http://www.flickr.com/photos/rewinn/8489752510/ and connect it to a few relevant Flickr groups.
Then I hop over to Twitpic http://twitpic.com/photos/rewinn and upload it with a couple of tags so it goes into relevant tagstreams - again, don't spam or it will end badly.
Those are my basic publication channels, except when I feel like blogging about an image here. All in all, the joke is presented to a few thousand willing viewers with almost no effort on my part; it the joke works, they pass it on. If it flops (and let's be honest, most jokes flop the 1st time) sometimes there's feedback so the next effort is better!
This process is way way different from the way I used to learn about writing and used to discuss ideas. I don't know where it is all going, but it seems to be better than the ways I learned in school!
at 11:52 AM No comments: Links to this post

We picked up a silicon steamer a few months ago, and it has become one of our favorite cooking tools. It's a pan and a lid, as shown in the picture, made not of plastic or metal, but of a silicon substance that feels not quite like rubber; it's moderately floppy. You simply load it up with things you want to steam, add a little water and run it through the microwave.
Be careful: it looks innocent but it gets hot!
When I first saw silicon cookware, I confused it with plastic, which you would never put in the oven and would be very reluctant to put in the microwave. Plastic gets soft when it gets hot, and you don't want even a little bit of plastic to get in your food. However, this silicon cookware seems different. It appears to be chemically very inert, and not to affect the food at all.
The convenience of this gadget means that we can minimize food waste, while saving a little bit of energy in cooking.

The inspiration for this post is this week's Change The World Wednesday challenge:

This challenge is a good example of the way that green living can result in better living: more frugal, better flavored, less expensive and more nutritional. Sometimes we have to make sacrifices to make the world a better place, but in this case, it's just common sense!
at 10:26 AM No comments: Links to this post 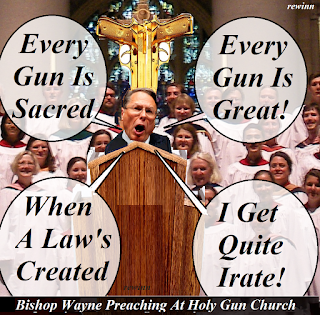 There is so much silly talk about the sacredness of guns in America that it is no longer possible to have a rational conversation with the gun nut extremists. They are completely impervious to facts or to history, and it's become clear why: they worship the gun.
The gun is their god.
WITH the gun, they have safety; they know what to do; they can be heroes.
WITHOUT the gun, they are weak; they are threatened; they are in fear.
The Holy Gun Church is a death cult; they solemnly proclaim the utter necessity that some be sacrificed so that the Holy Aims be fulfilled. They proclaim that the Sacred Gun protects them, and evidence be damned.
All that is left is mockery and pragmaticism. You can't negotiate with them.
They're like something from Monty Python   ---
at 9:16 PM No comments: Links to this post