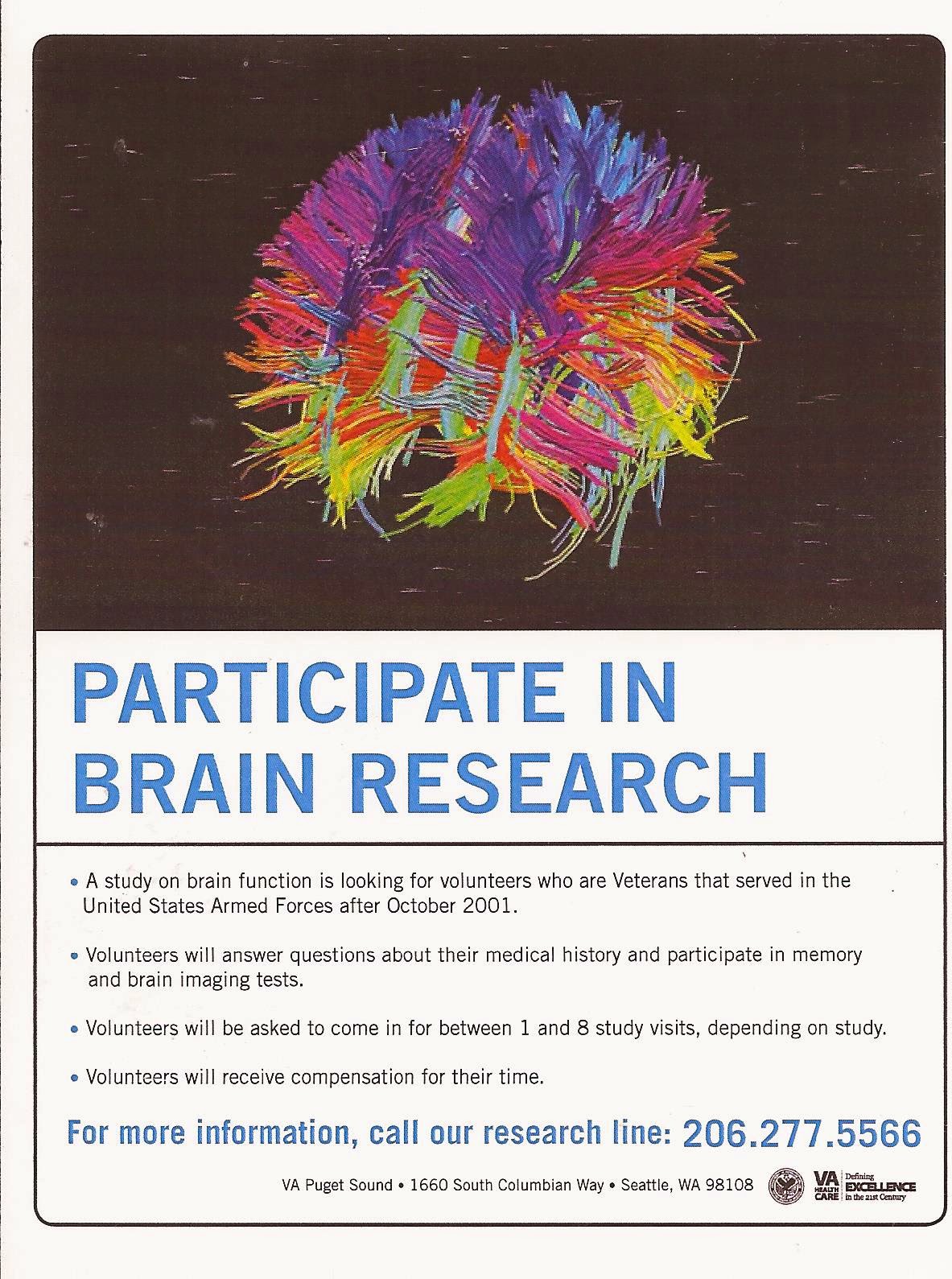 I'm participating in a brain research program at the local VA hospital - and may be you can too!
They're looking for people with a variety of experiences related to head trauma, such as being around when something explodes. They're especially looking for Iraq/Afghanistan veterans who were exposed to blast effects, even minor ones, but also for veterans who were not exposed to blast effects or whose exposure was long ago, athletes who had concussions back in high school. And then there's people like me: not a veteran, never concussed, nothing.
Someone has to be at the bottom, I suppose.
People like me with an interest in science, but not the training or (frankly) the inclination, can participate in valuable studies like this. Figuring out how even mild trauma can affect memory, mood and more is really important. Most of the study is noninvasive, consisting of a lot of verbal tests and a couple of MRIs, which I find restful - although there is one or two lumbar puncture. Now before you start screaming, I have to say that I've had these and they are nothing like the horror stories I heard as a kid, with power tools boring into your spine while you scream in agony. The needle used on me was about as thin as fishline, and the sensation was much like a bee-sting - annoying to be sure, and absolutely nothing I would seek out, but also nothing worth worrying about.
The part they didn't make clear in advance as "No sex for three days after." Bummer! But if that's not a problem, I'd suggest looking into volunteering for this. There's some compensation, roughly equal to minimum wage, plus they feed you and best of all, you get to do Science!
Call the Research Line at 206-277-5566!

A Sunday Of Perspective

Sunday I went to Cyril's to pick up a couple of walkers to deliver to a veterans' advocate who was having difficulty walking safely due to chemo therapy. It turns out that the co-pay for one of these was $250, which is quite a stretch for someone who has just lost his paycheck due to illness.
Driving down south of Auburn was reasonably pleasant and directionfinding was easy with help from Garman. I delivered the items to his house, where at first his mother thanked me sincerely but protectively, since the chemo is exhuasting. However I was then invited in because the guy wanted to chat.
It was really a great conversation; there's a lot to learn in the business of veterans' advocacy, and a limited time in which to learn it. If positive attitude can make a difference in beating cancer, then this is a candidate. It can be difficult for someone who has spent his life helping others to reverse roles and accept help, but that's something that we all need to do from time to time. It's not a reflection on one's innate ability or competence; it's just the way things are. However, at the end, I was actually asking him for help and advice on a couple of matters, and he cheerfully offered to make some contacts. I hope that's helpful for him as well as for the others.
I don't want to name any names, because you know, privacy and all that, but this is indeed why we do it. It sure does make my problems seem small!
at 11:00 PM No comments: