Litigating the Right to Peace - Recording of June 22, 2013 Talk with Roberto Zamora

In 2003, Luis Roberto Zamora Bolaños sued the government of Costa Rica for violating the Peace Clause in its Constitution by supporting warlike acts. He won, and the government backed off!  How did he do it and what can we learn from this? This is a recording of a lecture delivered June 22, 2013 at Seattle University School of Law. In it, Zamora discusses

Our wonderful neighborhood had a local party for Independence Day, July 4th. One family set out chairs, some food and a cooler. Eight or ten neighbors drifted by, adding to the table and talking about everything.
A small boy bounced a large rubber ball and chased after his parachuting man, a tiny girl drew an American Flag in sidewalk and sang "Landslide" ("She prefers the Dixie Chicks cover," explained her mother, "But we like the Fleetwood Mac version too".) A 1-year-old showed off his walking skills and goggled at the fireworks.
And the fireworks! Somewhere to the south there was major fireworkage going on, but all around people
were shooting small rockets and mortars. We may have had a few things going on our street too.
A couple of guitarists took requests, and sang along with the little girl. Eventually the children went to bed, but the fireworks continued.
We gossiped into the night and it was just as well that I could walk home because someone's punch sure packed a punch! I checked out at midnight because I had work to do in the morning, but I would not have been surprised to see the diehards still at it when the sun rose.
This is not a big deal - just an ordinary neighborhood being ordinary - but isn't that a really big deal?
at 8:57 AM No comments: Links to this post

Happy Independence Day, And A Message From Thomas Jefferson

They say that Thomas Jefferson was good at a party, and yet always the smartest guy in the room. Certainly he wrote a heck of a lot of very smart things, not the least of which was our own Declaration of Independence. Good job Tom! 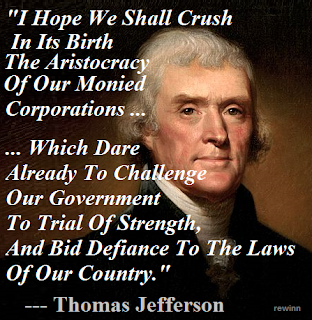 Later, he also wrote something pertinent to the great threat to liberty in our time:


"I hope we shall crush in its birth the aristocracy of our monied corporations
which dare already to challenge our government to a trial by strength, and bid defiance to the laws of our country."
--- Thomas Jefferson, Letter To George Logan Nov 12, 1816

You can read the whole letter in
Interestingly, this quote is included in a larger fake quote used by some doctrinaire Libertarians, leading to its debunking on Monticello.com. Unfortunately the debunking of the fake quote is clumsily worded to give the appearance of debunking the actual quote above, so it's worth noting:


I doubt Jefferson anticipated the internet but I'm sure he'd appreciate its encouragement of civic action, especially in defense of our nation against monied corporation who bid defiance to the laws.
at 11:39 AM No comments: Links to this post

I love creating political art. Perople just don't read long-winded essay much anymore; Images convey truths in ways words do not. We can reason graphically, if we marry word and image carefully or luckily. All of these images are my own work although, obviously, I started with an image and added to it.

This definition was good for a few laughs, but lacked punch until I added it an image of a champion martyrbator from the Family Research Council, who was complaining about how put-upon Christians are.


Then there's the war on women, heating up with crazy talk out of Texas. Let's HELP CONSERVATIVES keep track of how long they can go without insulting women or attacking their freedoms. 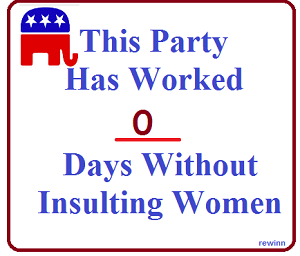 Equality of sexuality was also in the news, and it occurred to me that the right to discriminate flows both ways:


The best line Captain Kirk utters in all his movies deals with his confronting God on an alien planet. The thing claiming to be God wants Kirk's spaceship to fly him back to the Federation, and everyone agrees that's a good idea, until Kirk has the temerity to ask "What Does God Need With A Spaceship?"  Well, the meme could apply more broadly ...

Allegations circulated that Obama is responsible for actions of IRS field offices that he didn't order, but that a sufficiently skilled mind-reader would detect was His Will, PLUS reports that email about Benghazi was faked by a "Congressional source" prompted this handy flow chart:


I got thinking about food safety and companies too big to punish...
Then there's the Human Rights Campaign Red Equal Sign symbol. I thought it odd that supporters of equality were slow to appropriate our patriotic symbols. After all, this *is* America and equality is a foundational value (even if scanted in practice)

Then there's Paul Ryan the whiner. He complained that the Farm Bill that he voted against failed to pass. What a maroon!