When I got my ballot, it had THREE names on it:
(_) Conservative Romney
(_) Moderate Romney
(_) Barack Obama.

I couldn't figure out which Romney would actually take the oath of office, so I voted for Obama instead. --- 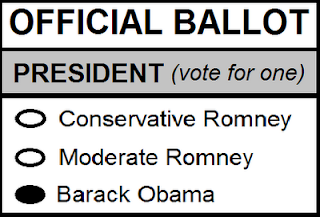 Ads Within Ads: How to Get MORE Politcal Ads on TV! #pres2012


Facing a shortage of time to air political ads, campaigns are now turning to placing campaign ads within other campaign ads.
"It's similar to product placement on a sitcom," explained a salesman. "Your typical campaign ad shows an American highway with spacious skies and  billboards. We simply place campaign ads on those billboards. Or where there's a crowd listening to a candidate talk, we have them holding signs for an allied candidate."
Take, for example, Republican Richard Mourdock, locked in a tight race  running for Indiana's Senate seat against Joe Donelley. Mitt Romney made a TV ad specially endorsing Mourdock as the sort of guy Romney really liked.
But Mourdock needed more help, because his views on pregnancy resulting from rape as "Intended by God" might hurt his standing among women that worship a competing God Who disapproves of rape. This created a problem: all available ad time had already been sold!
Trust good old American ingenuity to sold the problem. With "Ads-within-Ads", TV stations can sell the same ad time twice!
But what do voters think?
"I love this!" said one TV addict, who asked to remain anonymous. "This lets me view twice as many political ads as ever before. The only question is: what will they think of next? I hope someday they can beam political ads directly onto the back of my eyelids, so I can watch them while I sleep!"

Cook What You Have

Yesterday I prepared dinner by opening the fridge and going, "Hunh, what do we have?"
Into the cast iron skillet went:


I added a little olive oil, water and a dried herb from our garden (I can't remember the name and what does it matter? plants doesn't come when you call them anyway ;-), put on a lid and set the heat to medium.  I also put a sweet potato (or yam, or some orange root anyway) into the microwave, after piercing the skin to avoid explosions.


The Unnamed Dish In the Pan cooked on medium heat as I wrote, The Lovely Wife enjoyed a book and we both listened to music. Occasionally one of us would get up to stir, and eventually it was done. It didn't get photographed beforehand and it's too late now since it was too tasty to leave leftovers. This meal, so satisfying and yet so economical in time and money, lead me to ponder our Three Meal Preparation Styles:

I just attended a short course on immigration visa issues in which the question came up of "O-1 Visas" = those granted to people "with an extraordinary ability in the sciences, education, business, or athletics."
The speaker said that these were fine for those who qualified, but were quite rare; perhaps unique among workings visas, they are never oversubscribed.
In plain English, it appears that top scientists as a group may no longer be trying all that hard to work and live in America. This may be a canary in a coal mine, an indicator species, A Bad Sign; what do they know that we do not?
---
Pondering "America Is Losing Its Edge In Innovation" in Forbes, I offer another modest proposal: too many smart kids are going into law school because they see lawyers making big bucks on TV, while the scientists get wedgies. The reality of law practice today is different; a minority get rich but most grads today will live as baristas or jumped-up paralegals. A relatively modest program of publicizing law's dismal future to undergraduates might nudge a few back into the sciences, where pay may also suck but a soulectomy is not required.
I approve of the legal profession, but who disputes that its current size far exceeds requirements? I'm not a scientist or engineer, but does it really seem plausible that we'll regain the lead from China by suing them over IP violations?
--
In an era of dominated by plunder through economics rather than plunder through force, Mitt Romney's plan for thirteen more warships a year is as brilliant as his discovery of a border between Iran and Syria. Should his faction prevail, we may profit from asking the Brits how it felt when their Empire crumbled and they no longer Bore The White Man's Burden (or, in our American jargon, Exceptionalism). The difference is that our domination is not threatened by independence movements or other outside forces, but by our internal decisions to waste our wealth building weaponized pyramids.
Another modest proposal: Let's create another Service branch: the Potempkin Service. Its core missions are (A) to spray appropriations into the air over enough Representatives' districts that its funding is secure, and (B) to build huge, shiny, loud "Marching Morons"-style weapons systems that don't actually DO anything but look as impressive as heck (I suggest replicating the Shield Helicarrier first). It would be best if they were optimized for use against enemies that don't exist, so that never run out of targets!!
The remaining Services would then be free to concentrate on doing something useful, e.g. finishing off Al Qaeda.
at 5:01 PM No comments: