Village Green Nursery in West Seattle: We Like It!

Tucked away in a West Seattle neighborhood is a friendly little nursery called "Village Green".

It's as if you had a neighbor who really, really liked gardening and was willing to help you out. The first time we went there, we weren't looking to buy; we just talked about our plans for our land and got a lot of good ideas, with no sales pressure, just a love of talking green stuff.

We actually bought stuff on later trips, and found the price and quality to be great. You can learn more about what they stock at their website. We'll be back often, partly for more plants, partly just to enjoy the neighborliness. We like the lavender mocha in their coffee machine too!

Isn't it great to find a local business that does everything you need AND competes on price? It's a long walk from our house but, on the other hand, a long walk through the neighborhood has benefits of its own ... it's like that classical Americana you hear about but is hard to find. 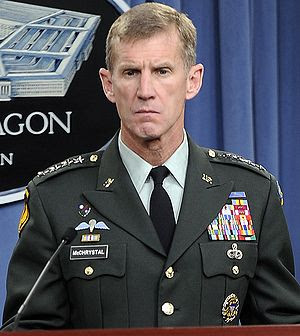 Count me among the few who think the McChrystal flap may be overblown.

Granted, he and his staff said things that were over the line: extremely and inappropriately insulting to their civilian superiors and colleagues. Obama has a right to be angry.

Granted, the UCMJ imposes obligations on military personnel that it does not on civilians.

Granted, that I don't know what the best thing to do in Afghanistan may be, but a shooting war seems unlikely to succeed.

But, let us be fair.

McChrystal did not make these comments in a speech or even in writing. He was bitching about his boss and his coworkers.

Bitching about the boss and coworkers is an American tradition. It happens. It happens a lot.

I believe McChrystal is wrong on the facts about his boss and his coworkers. But he did not disobey orders or publicly criticize his CinC. What McChrystal did unwisely is either forget that he had a reporter around, or not change his behavior when one was.

A reporter's job is to report. If the most interesting thing to report is your bitching, it's gonna get reported. That's the job.

Still others may worry that this situation will result in reporters being even more excluded from war coverage.... and I believe that would be bad.

In my opinion, if McChrystal had made his remarks in a more deliberately public way, then it would be clear insubordination and grounds for dismissal. But this is nothing like the MacArthur situation, in which a uniformed general publicly ignored a clear presidential directive.

The ready availiblity of quick stimulations, endlessly repeatable and effortlessly summonable is as addictive as potato chips; you really can't have just one. But unlike potato chips, you can justify the habit with the work you get done using the internet. It may be the perfect addiction!

When you find yourself ignoring people in the same house "just for another minute" then you should know you have a problem. And you can get to fixing that problem just as soon as you reply to this blog. And one more. And N more ...

Email ThisBlogThis!Share to TwitterShare to FacebookShare to Pinterest
Labels: Don't Be That Guy

My mother-in-law was a single parent, so for Father's Day we got her a card and some flowers. 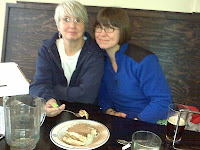 It just makes sense. She did all the parenting, so she should get all the parenting holidays. Besides, we like her and any excuse to give a little present is a good excuse. What the heck, giftgiving is fun!

It's extra easy for us, since she's living in a (literal) mother-in-law apartment in our house. She's the perfect housemate since not only does she help out around the house and tolerate our bad habits, she spends most weekends at her boyfriend's. We had worried a little bit about whether we'd all get along since there had been a normal amount of parent/child conflict, but it seems that now that we are all over 40, a lot of the teenage sturm and drang seems just silly.

There are many practical advantages to having an additional housemate. It's very handy to have an extra adult to share chores. Since she moved in, at dinner time we have 50% more people to help make food and carry the conversation. On the rare occasions where no-one is up for cooking, we hit Proletariat Pizza in White Center, which has not only some of the best pizza I've ever enjoy, but also a fine Tiramisu which is best shared among three (pictured).

Getting the flowers live was a pretty obvious move; in the past, we've swapped seedlings but what with the move an' all, this year I'm way behind on planting. So for Father's Day, The Lovely Wife and I stopped by the West Seattle Farmer's Market and picked up some seedlings. She doesn't know about them yet (still at boyfriends) but it'll be a nice surprise for a mom who, having done the work of two parents, should reap the reward of two holidays.
at 2:05 PM No comments: