Valet parking is an important service at the Seattle VA Hospital for two reasons.
First, many of the veterans seeking care at the hospital have problems walking, but the parking lot is necessarily large. Usually when I go over there, I drive around the lot about ten minutes, finding no open spaces, and end up parking in the neighborhood. That's ok for me because my legs are just fine and I'm never there for treatment, but for others, that's a problem.
Second, there's money in the budget for this. It was put in there in response to community pressure, and there's no financial reason not to do it. There's supposed to be enough money to cover valet parking until the new parking garage is completed, which will take some years but when it's done, should solve the issue for the long run.
However, a problem has arisen. The first day of 2013, the valet parking disappeared, and there was nothing to tell people when, if ever, it was returning. Veterans called the hospital and, receiving no real answer, our congressmen and senators. Soon the valet returned and it seemed like things were on track. However today (January 11) I stopped by there for another reason, and the valets were gone.
To the Hospital's credit, the signage was a little better; it told us the day on which the valet service ended. But it didn't say why it was gone or when it was coming back.
I emailed the veteran's affair person on the staff our congressman, Jim McDermott, and he quickly replied that the hospital had contacted him and said they were having problems with the contractor. They sent out a second message late this afternoon saying "Services will begin on Wednesday, January 16, first thing in the morning." and they'd let the community know by updating their message on the facebook page. and its twitter feed. This suggests a number of things:

Veterans And Friends of Puget Sound

Veterans and Friends of Puget Sound helps veterans navigate the often confusing network of Veterans Administration and other agencies, to get the best possible service that they have earned.
We are currently focused on the Puget Sound area but have contacts throughout the nation. Our main website is http://vafpugetsound.org/; we've started this blog to keep you up-to-date with current news, of which there is a lot!
America is a nation proud to provide those who offered their bodies and minds in dangerous service. Do your part; join us by contacting Veterans and Friends of Puget Sound today at VAFPugetSound@gmail.com.
at 3:59 PM No comments: Links to this post

Gene Sequencing was completely impossible 10 years ago, and very expensive today. But it's available, for a price. Here's an innovative effort to raise money for one case, that of SF author Jay Lake, and perhaps in time prices will drop so it's available for all who need it.

http://www.youcaring.com/medical-fundraiser/Sequence-a-Science-Fiction-Writer/38705
at 1:36 PM No comments: Links to this post

Hit By Bus? Go For #Coffee!

I like my coffee as much as anyone, but if I get hit by a bus, I'm going to the hospital BEFORE Starbucks. Not so this man:


"A 32-year-old man who was hit by a bus Tuesday morning in downtown Seattle managed to get up and walk with a bloodied head to a nearby Starbucks for a cup of coffee.  The injured man ordered a drip coffee at the Starbucks store at Westlake Center, said morning manager Tony Farrell. But he didn't get to enjoy the brew, and instead was taken by paramedics to Harborview Medical Center, where he is recovering from his injuries,....

Of course, it happened in Seattle ... more at:
"Metro bus hits pedestrian, who heads off for coffee"

Email ThisBlogThis!Share to TwitterShare to FacebookShare to Pinterest
Labels: coffee, Things That Make You Go Huh 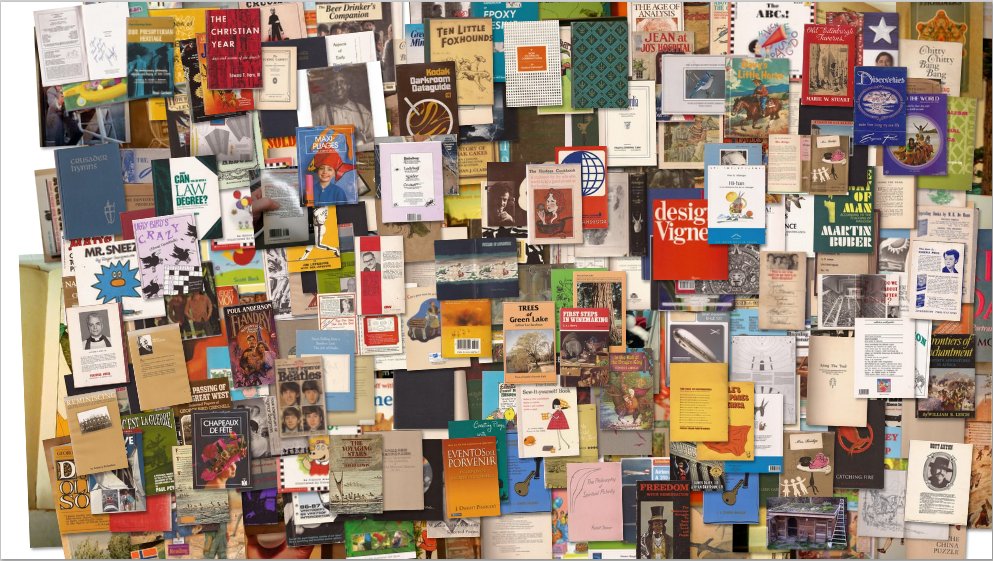 Over the years, I've scanned over a thousand book covers into Amazon's database. It's a harmless hobby, and I like to think that I'm making my small contribution to human knowledge. However, I'm prideful as well, and would like to have a way of showing off my effort without having to direct people to Amazon's site. So far, I haven't figured out haw to do a slideshow from my catalog of Amazon images, but some of the more recent items I've put into a picasa folder here  as well as the collage above.
What can I say? This is a scrapbook!

Why Mommy is a #Democrat: Children's Book Review

If you're looking for a simple explanation of core Democratic Party values, "Why Mommy is a Democrat

" by Jeremy Zilber provides it. The artwork is pleasant enough and the reading level is aimed at preschoolers or perhaps 1st graders.

I found the reviews of this book to reflect our current divisions in American politics. Democrats emphasize things such as health care and fairness, while the Republicans emphasize things such as lowers taxes and freedom to do whatever. Some reviews criticized this book for putting the Democratic Party in a positive light, but that's absurd; its purpose is to explain that Party's underlying philosophy so if you don't want to read that, don't buy this book.
Some reviewers obviously disagree with Democratic values, and politically that is their right; however, that has nothing to do with the quality (or otherwise) of this book. You would not expect a child's book on the Bible to promote anti-Christian values or a child's book on evolution to promote creationism, so why would you expect a child's book on the Democrat's to promote Republican values?
If some Republican wants to write a book "Why Mommy Is A Republican" then fine, let them (...maybe someone has.) But it's just silly to expect THIS book to be THAT book.
at 8:59 PM No comments: Links to this post

The successful campaign by former professional baseball player John Olerud to enrich himself at his neighbor's expense would be just another chapter in the sordid history of modern sports but for the additional elements of religion and law.
The facts are not in dispute:


So far, this is just ordinary bullying, and a good example of why Olerud should never be invited to speak to schoolchildren about how sports builds good character. To the contrary; he's a good example of how our current system is corrupted by money and you really don't want to live in a neighborhood with ligitious, rich, entitled-feeling professionals. They just might decide to enrich themelves at your expense.
But the additional element of blasphemy may be of interest to those who care about such things. According to reports, Olerud and the neighbor go to the same church. It's a Christian church, so Olerud's representative decided to use that in negotiations. Olerud or his representative accused the neighbor of being unChristian in not sacrificing himself to enrich Olerud.
Yes. Jesus died to make Olerud rich.
It is blasphemous to call upon the Holy Name to bully your neighbors. I appreciate that not everyone agrees on what happens after we die, and I confess to not being at all sure myself, but I sure do wish I could see what happens when Olerud has to account for THAT little maneuver before the Final Umpire.
at 8:33 AM No comments: Links to this post