Sunday June 8 I visited a couple of old friends.


Sheryl Cole and I met when she was 19 and I was 21. Our marriage didn't last and in retrospect I'm not surprised, but we like each other a lot and meeting for breakfast at the Stables was fun in every way. Afterwards, we went to the apartment of one of her daughters where I met her daughter's partner. I resolutely did not mention that they were about the same age as Sherry and I were when we met - no sense doing the old fogey thing more than I have to!
I hope we can all get together again some time. We really enjoy each other's company.
Later I stopped by the house of Phil and Alyssa, friends from Aikido. They're really nice people and seem to have their act together. Their son Max, who I recall as an infant (...hmm, actually I remember Alyssa being pregnant with him...) was away at college or something, so I suppose time has passed. I really couldn't tell with these two however. It was very refreshing!
We are all a little grayer and a little gayer!
at 10:51 PM No comments: 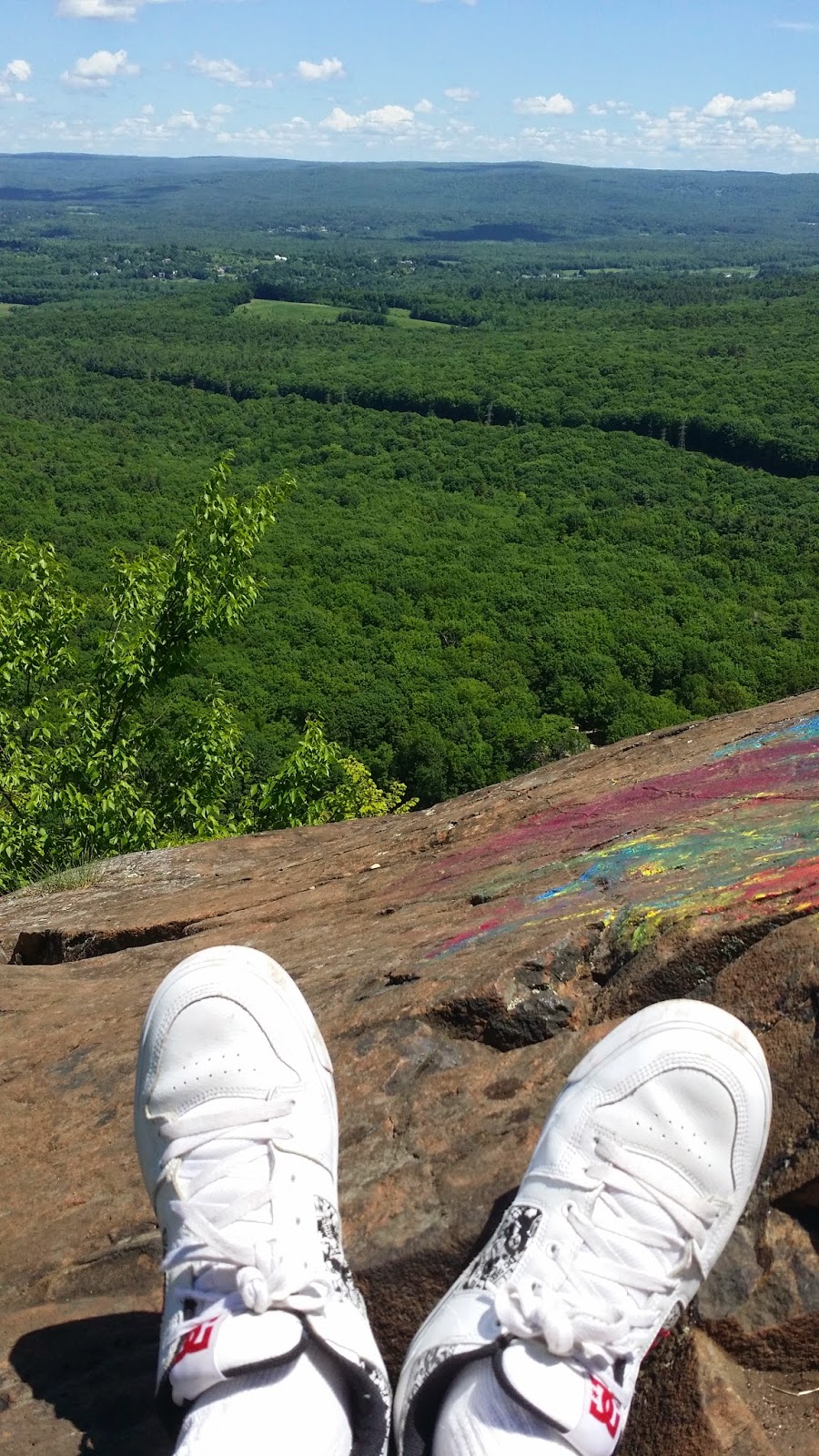 Saturday June 7 I drove to the Notch and went up Bare Mountain. This has always been a good place for re-creation: the paths are only barely improved enough to make hiking in sneakers practical. It makes me sweat but not hurt. I can sit on a rock and see into the next state, and realize that I really enjoy this stuff.

That evening was the law school reunion at the Basketball Hall of Fame. The canapes and the meal were excellent - certainly some of the best commercially prepared food I've ever had. The important part was meeting classmates Jocelyn (who teaches at WNEU) and Lisa Bongiovi (who is a muckety-muck at a big technology firm - this is not surprising.) There was also a Sandy Cohen who insisted I was confusing her with Amy Cohen, which is possible, and Lynn Scull, one of Jocelyn's former students. who basically represented her class and ate at our table with some people from 1974. I had a nice talk with my favorite Jurisprudence professor, who congratulated me on continuing to do my social justice stuff, and I guess I did have a lot of line items in that regard. The slideshow featured a lot of class pictures that I had taken that went into the yearbook that Lisa had edited (in addition to law review and being at the top of the class - she is indeed a Type A!) This was so much fun that I'm afraid I'll have to just plan to do it again in five years!

Salsa And so Forth - Friday of the Nostalgia Tour

I'm writing this some weeks later; I had intended to make a contemporaneous journal but that went the way of good intentions.
Friday June 6, 2014 I spent much of the day working; the little motel room had a good table with a nice view of pond. I had to pay for this vacation somehow!
Afterwards, I drove up to Hadley to locate a Salsa Dance that Lisa had expressed enthusiasm about.  It was in a VFW hall that I must have passed by so many times when I lived in Amherst and worked in Hartford; this was my first time in. I was a little early, and could have profitably attended the beginners class, but I was somewhat underdressed (shorts and t-shirt didn't match the classy attire) and I also wanted to get more pictures in.


I zoomed up to Amherst and got some picture of the places I had lived. 33 South Valley Road looked nice; One of the trees out front I had planted but I'm not sure which.
I got my pictures but didn't want to disturb whoever currently owned it, and moved on. I got a few pictures of the stucco house where we'd rented the ground-floor flat. Eventually Eric moved in with us back then.
Other than homes, my favorite building in Amherst was the Jones library. It seems to have budded a few annexes in the same style.
After those pictures, it was time for the dance. I stopped at a thrift store on the way and picked up a Hawaiian shirt, so I sortof fit in visually.
The long-time dancers were very skilled and enjoyed their art very much. They were also patient in showing me the basic steps. However, my mind is just not oriented around that sort of ritual stepping; I enjoyed the conversation with people; one of the nice things about the basic step is that you can carry on a real conversation while moving minimally.
I talked with one of Lisa's colleagues about the hazards of working with damaged children all the time; from the way that she had spoken I could feel there was an impact, and in a moment of bluntness she agreed. It made me think.
Another dancer asked the usual question about what I did, and somehow we got on the subject of the King-5 interview I was in last week. It turns out she had worked with the guy when he was in Pioneer Valley! I took her card and emailed the two of them when I got back to my room - you just never can tell who you'll run into or what may be the connections.
at 10:27 PM No comments:

Dan drove me to the airport Wednesday evening for a flight to Springfield by way of Bradley. Leaving at 12:45 am Thursday morning, the flight was completely full. I had taken Dan's advice to put all my stuff in a carryon backpack, plus my laptop case, but as it happened the flight was so full that they asked for volunteers to check their carryons. I wasn't really in such a big hurry, so I put mine in.

I had anticipated sleeping most of the way. This took some doing since the person in the seat next to me wasted both our times by evangelizing me. She was a middle-aged unhappy woman with a beige Bible who was unable to take a hint. She asked me something about how much or how often I'd read the bible, and I foolishly thought I could end the conversation by saying truthfully that I had spent four years in seminary and had enough knowledge; she instead either took this to mean that I wanted to discuss the subject or that somehow her study had made her such an expert that she could change my entire view of the matter through conversation. It was truly an odd conversation but I could see that she was reeling off one rote phrase after another, ostensibly seeking to change my mind but in reality reaffirming her feelings. Ultimately she showed me her Bible and said, "This is my god". I said, "That is a book". I suppose I could have tried the whole "A finger pointing at the moon is not the moon" but I didn't think of it; instead, when she asked me what I believe, I said that I believed she was a very unhappy person but I couldn't do anything about it. She said that she was a very happy person, but I don't know whether it persuaded anyone. Anyway, she stopped bugging  me.
In the Minneapolis Airport, I got onto a much smaller plan - it felt like it was smaller than a Greyhound bus, but it got me where I was going with no events - except that it was raining in Hartford (while sunny in Seattle).
I had heard that renting cars at the airport was extra expensive, which was borne out by my internet research, so I planned on getting to Springfield and renting there. I remembered taking the bus home from Bradley once, long ago. When I checked it out at the airport, it was a long and involved process. I tried calling all the rental agencies on the handily located phones, and found one that said it was $35  day - that was fine. Of course, when I picked up the car, the price was nearly doubt, between gas and taxes and add-ons. My only consolation was hoping that the other agencies would have been worse - that they hadn't included add-ons in the price either.
The car was a late-model that I'd test driven before. It is perfectly designed not to work well for tall people since the island holding the rearview mirror takes a big chunk out of my 1 o'clock sight line. When I'm driving on the freeway next to an onramp, there is the illusion of something entering from that side. The windshield posts are also stupidly designed to be very wide at the top, cutting out more of the 11 o'clock sightline. The power windows are idiotic and generally speaking it just has far more doo-dads than anyone really needs, but it got me where I was going and that's that.
The motel was fine; not fancy but I have no complaints.
I asked the clerk about a grocer and he told me of one about two blocks away. I got solid simple far: top quality peanut butter, celery, yogurt, blueberries, and a box of pop-tarts because I was on vacation. It turns out pop-tarts are even worse than I remember but the other stuff was ideal vacation food, reasonably tasty, easy to eat, and very budget conscious.
During the day I alternated resting up with working on some phone calls I needed to do for work. I also drove around to get picture of the places I'd lived in downtown Springfield. The brick apartment building was much the same; it even had the same kids running around speaking in Spanish (...although, considering the decades, it was probably their children ...).

My condo on Worthington was, as I had anticipated, recovering from the gas blast a few months back It's strange to think that if I had stayed, I would have just about paid the mortgage in time to be enected from the thing!
That evening I drove to Lisa Kling's Aqua-Zoomba class, which was a lot of fun.
at 5:04 PM No comments: