Can You Beet This?

My beets are now flourishing even though it's November!
I have limited garden space. Among the tomatoes in my south-facing beds I had put a few beet sprouts, just to see if the root veggies would play nicely with them. Through the summer, the beets grew very slowly, perhaps because they tomatoes overshadowed them; there just wasn't that much light getting to their leaves.
But the tomatoes' time in the sun is over. As they withered, I cleared away the dead leaves and stems, making mulch out of most of it, although some remained attached to a few greenies to rest, wrapped in newspaper, to pink up indoors.
In response, the beets are flourishing. They are producing a lot of leaves and it looks like they're growing roots. The foilage is reasonably attractive and ... best of all ... they require almost no care at all in this season!
There's a lesson here, but I'm not sure what. I will definitely experiment more with multilevel gardening over the coming year.
at 9:42 AM No comments: Links to this post

I'm building state guides to free CLE. Each lists several links to free on-demand CLE, and if there's some upcoming live seminars I throw them in too. The general idea is to help out lawyers who need to satisfy CLE requirements at a minimum price. I'll add more to this page as I put them together; here's what I have so far: 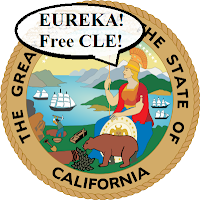 I'm proud to announce the Guide to Free CLE for California featuring "more than 10" hours of free recorded, on-demand CLE and listing for live events. The selection provided is only a fraction of what is available; if you have a particular topic on which you'd like a free CLE, contact me and I'll look around. If you see any errors in the Guide, or have suggestions for improvements, contact me ASAP! This Guide is third in a growing series that includes:
Similar pages for other states are now in process. If *you* have a preference as for which states get their pages first, so you can start earning free on-demand CLE, comment below and I'll do what I can!
at 10:00 AM No comments: Links to this post

Who Turned 60 Minutes Into a Zombie? 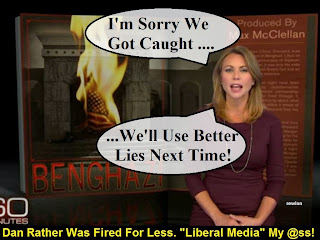 When 60 Minutes put out lies about Benghazi last Sunday, it:
A) took the word of the admitted liar Davies,
B) didn't check his story against FBI reports, and
C) "forgot" to mention that they were publishing his book and would profit handsomely if it did well.
As the saying goes:
"Once may be happenstance, and twice may be coincidence, but three times is enemy action."
Lara Logan, the "reporter", said that they'd worked on this report for a year, so they can't claim they got it wrong because there was no time. As it happens, the guy who was in charge is a long-time Fox News guy, who participated in some of the scummiest propagandizing in the modern era; it's readily apparent that 60 Minutes is gradually turning into a junior version of Fox.
It took half a week for Logan's story to fall apart. Even then, the first reaction of 60 Minutes was to read on-air letters of support from viewers - not the letters of criticism, but only the letters that agreed with CBS's story.
But within a few more days, even CBS had to admit they were defending a lie. They refused to retract the story, but saw a way to get more ratings out of it. "60 Minutes" teased an upcoming apology through its show, so that viewers would be giving 60 Minutes ratings all the way to the end. Then, at the very end, Logan said it was a mistake and they were sorry; she was said she was mislead by a source ... as if that excuses not checking a source that had admitted lying to his employer and not mentioning on camera that CBS was peddling his book.

This was not a mistake. The kindest interpretation is that there was a deliberate refusal to vet a source professionally but, in view of the book, it was more likely a conscious decision to do everything possible to make a buck.
Friends: we must face facts. This is not the"60 Minutes" we used to know and love. It's a zombie, rotting and controlled by an evil alien force.
Let it die.
Although - on the plus side - it is great fodder for humor!
at 12:52 PM No comments: Links to this post