Let's set aside politics for a moment, and look at Ashley Todd, the hoaxer, McCain Campaign volunteer, as a human being.

Something is not right with the woman. I don't know what, but it's clear she needs help ... compassion ... probably mental health care, maybe shelter from an abusive relationship.

No-one has a "B" carved into her face that doesn't need something.

McCain's allies (although not necessarily the man himself) jumped on this sad story as a weapon in the political campaign; before the facts were known, they passed around disgusting made-up details (a.k.a. "lies"). They were wrong. They deserve to reap the results - the least of it being, no-one can trust anything they say, ever again.

We're not rightwing partisans who abandon the mentally ill and charge women for rape kits. We help Todd and the millions of other Americans who need it.

Can we heal our great nation?

Oslo - The Nobel Prize Committee has officially informed Alan Greenspan that he will never, ever be award the Economics Medal because his theories, which underlie the current financial meltdown, have proven to be utter bosh.

"We don't want to be associated with such a loser," explained a committee member.

Greenspan described his theory in a speech before the crisis. "If you lend people money that they can't possibly repay, just bundle that loan with a million others, then sell the bundle in small bits ("tranches") to someone else.

"Since no single loan is a significant threat to the entire bundle," he said, "The whole bundle is safe."

"In addition, there is no need to regulate this activity. The only people who know the meaning of the word "tranche" are highly sophisticated investors, so why have a regulator check to see whether there's any real basis to the financial instrument? 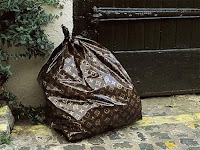 Besides, purchasers will just bundle their scraps with a million other scraps (using the "Hefty Tranche Bag"), and sell tranches of THAT to even bigger fools. Thus there is no significant risk to anyone at all!"

EXAMPLE: Bob has no job or assets. He borrows $500,000 from Crazy Eddie's Nonbank Mortgagelending Co to buy a two-bedroom home, using an Adjustable Rate Mortgage (ARM) at 0% interest for the first 5 years and market rate plus 2% thereafter. Crazy Eddie expects to get five years of payments from Bob. When the ARM adjusts, there's a 95% chance Bob will default. While the actual math is more complicated, in general the expected loss to Crazy Eddie is roughly 95% of $500,000 or $475,000. Therefore, Crazy Eddie divides the mortgage into 100,000 tranches, each of which risks losing only $4.75. Compared to the original loan, this is practically zero, so with the help of a friendly rating company, Crazy Eddie sold all of these tranches as Triple-A rated securities. Crazy Eddie's competitors had to do the same thing, or go out of business. For more details (including actual cases), see The Giant Pool of Money.

"Regulation of securitized mortgages," he concluded, "Will only interfere with the process. Private lenders, unconnected to any bank or other lightly regulated institution, will flood the market if left unchecked, and the result will be continually increasing financial activity with no need for a physical reality check at all. It's like magic!"

"A few of us thought this was a great idea," said one committee member, speaking on condition of anonymity, "And thus invested heavily in the market. Now we're melting down past awards for the bullion. Or maybe we can eBay something. We need the money!"

The Nobel Prize Committee in Physics issued a statement: "We have previously discussed prize nominees in the field of perpetual motion machines. They were always good for a laugh. Who knew that economists would take it seriously?"
at 7:54 AM 2 comments: Links to this post 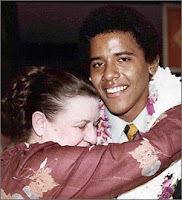 ...two weeks or so before the most important election in his life, and he takes a couple of days to visit his ailing grandmother.

That's a real mensch!
at 9:34 PM No comments: Links to this post

Have A Voting Party!

I love the Civic Ritual of going to the polls with my fellow citizens, secretly marking my ballot and dropping it into the ballot box with a satisfying "THUNK!"

The problem with mail-in ballots is they just aren't fun enough! But absentee/mail-in is the way I have to go; I'm a polling inspector and therefore can't vote in my home precinct. Lots of people work all day (Voting Day is a work day - how crazy is that?) and mail-in ballots are the only practical way they can do it.

But I miss the fun, the civic-togetherness and all that.

So THIS YEAR we're having a VOTING PARTY! Saturday, my local friends and as many people as I can get from the neighborhood are getting together at a local coffee shop, then marching to the nearest post box and toss them in. Then we go have a beer and celebrate our democracy!

We get the civic-togetherness AND the ballot in one handy chunk! And it's totally non-partisan - we don't care WHO you're voting for, just vote dammit!

This is REALLY EASY to organize in YOUR COMMUNITY - so why not?Digg This Idea!
at 8:05 AM No comments: Links to this post

Charlie and the Brain Shunt Factory 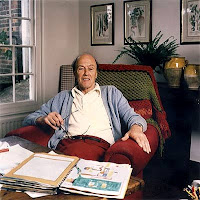 "Charlie and the Chocolate Factory", and many other delightful children's books, were written by a fighter pilot who helped develop a brain shunt.

This is a true story of loving parents creating good from tragedy. As I wrote in wikipedia:

The Wade-Dahl-Till (WDT) valve is a cerebral shunt developed in 1962 by hydraulic engineer Stanley Wade, author Roald Dahl and neurosurgeon Kenneth Till.

In 1960, Dahl's son Theo developed hydrocephalus after being struck by a car. A standard Holter shunt was installed to drain excess fluid from his brain; however the shunt jammed too often, causing pain and blindness, risking brain damage and requiring emergency surgery. Till determined that debris accumulated in the hydrocephalic ventricles could clog the slits in the Holter valves, especially with patients, such as Theo, who had had bleeding in the brain.

Dahl knew Wade to be an expert in precision hydraulic engineering, from their shared hobby of flying model aircraft (in addition to building his own model aircraft engines, Wade ran a factory at High Wycombe for producing precision hydraulic pumps.)[1] With Dahl coordinating the efforts of the neurosurgeon and the hydraulic engineer, the team developed a new mechanism using two metal discs, each in a restrictive housing at the end of a short silicon rubber tube. Fluid moving under pressure from below pushed the discs against the tube to prevent retrograde flow; pressure from above moved each disc to the "open" position. As Till reported in The Lancet, the invention was characterized by “low resistance, ease of sterilisation, no reflux, robust construction, and negligible risk of blockage”. See Tales of the Unexpected: Roald Dahl’s Neurological Contributions".

By the time the device was perfected, Theo had healed to the point at which it was not necessary for him; however several thousand of other children benefited from the WDT valve before medicine technology progressed beyond it. 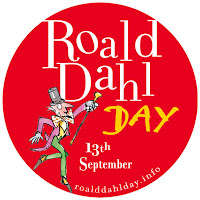 The full story of Dahl's life is vastly more complex and interesting than any fiction. To get started, I recommend "Boy" (suitable for children) and "Flying Solo" (for teens). His later life showed no signs of letting up, including a tumultuous marriage to Oscar-winning actress Patrician Neal. Let us not forget Roald Dahl Day, which is all about encouraging reading!

Learn more about this fascinating character, who surmounted many tragedies with eccentric determination, at http://www.roalddahl.com/
at 9:45 AM No comments: Links to this post