Bait And Switch, by Barbara Ehrenreich

Subtitle: The Truth Will Set You Free, And It's Cheaper Than A Seminar!

You need to read "Bait and Switch: The (Futile) Pursuit of the American Dream" by Barbara Ehrenreich 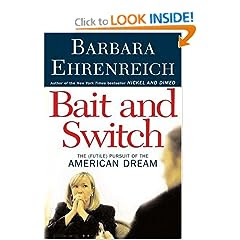 if you are:
You need to read this because most people going into white-collar work have an illusion that will get their pockets picked over and over. Your choices are:
Ehrenreich set out to write a very different book. In the tradition of participant-observation sociology, she would occupy an actual position in an organization, do the work, and notice what it was like so she could describe it. This is not unlike living a year in a peasant village or lamasary, and then producing a book of observations.

Like most people who go into the white-collar professions, Ehrenreich knew that if she did the right thing, got the right education, developed the right skills, pushed the right resume, gave the right interview and worked with all her heart to the maximum of her ability, then she would get a job with the right company, where should would rise to the right level by doing the right work and ultimately have financial success. The only break in this plan is that she would bail early to write her book.

To her obvious surprise, the corporate world was more inaccessible than a Tibetan temple; there was a wealth of paths, guides and guidebooks, but nothing that actually took you there. She did all the right things to get the job. She generated an appropriate resume, got appropriate references, and started working the process. She sunk money into job hunting seminars, consultants, even a makeover. She took personality tests, re-wrote the resume, networked, re-re-wrote the resume, flew out-of-town to more seminars, widened her search parameters, lowered her standards and passed out endless business cards.

She took the bait. It cost a year of time and many thousands of dollars and at the end, the box she had purchased had nothing in it.

The bait was still being offered to each year's cohorts of youngsters heading to college, to Job Placement Offices and to Human Resources Departments. Those determined to do white-collar work may have no choice but to accept the bait and hope for the best; however, being fore-armed with the truths Ehrenreich has dug up will help you to detect b.s. when it comes flying your way, to dodge magic formulas for success in job-hunting (and in keeping your job), and above all, to stop blaming yourself for being among the tens of millions of American white-collar workers un- or under-employed. There's so many of us, we can't all be dorks!

There is much to enjoy in this book. Her sly humor deconstructs pseudoscientific personality tests, con artist resume writers, and employment seminars designed to extract money from the unemployed. These stories alone make the book essential reading for the newly unemployed, as they can save you hundreds of hours and thousands of dollar lost to friendly people who want to "help" you ... out of an overburdened wallet.

But the more valuable story is the over-arching one, that the bait of a white-collar job is an illusion. Whatever security there may have been in Ozzie and Harriet 1950s America is gone. Don't look for it, and if offered it, look for the man behind the curtain.

There are books about job hunting that are more cheerful. They are full of crap and designed mostly to get you to buy them.

This book is less cheerful, but that it lets you see helpful truths. Armed with these truths, you have a chance to get somewhere with all your limbs and some of your wallet.

Recently I put Lawyers for Warriors on Facebook as a cause.

The goal of Lawyers for Warriors: THAT NO WARRIORS' FAMILY SHALL LACK LEGAL AID

The warriors community is loosely defined as our servicemembers, veterans and their families.

Legal Aid is also loosely defined, referring not only to legal aid organizations but to the idea that the help needed should be available. Some members of the warrior community can afford to hire private practice attorneys, and there should be such available, with training in appropriate areas (e.g. SCRA, USERRA). Others are impoverished and need traditional pro bono, or whatever.

There are many involved efforts addressing part of the problem. They great work they are doing must be praised and not minimized; however, as a whole, they are not organized, coordinated nor comprehensive. A comprehensive solution is no-one's job, therefore no-one is doing it.

These elements were obvious way back in December 2007 when the first Lawyers for Warriors CLE took place at WSBA. In the following 16 months, the task of identifying existing resources was proving to take way too much time for one volunteer posting on blogspot. And even when complete, keeping it up to date would take a crazy amount of effort for one person. The ABA is a fine professional organization, but even its more limited (by design) Operation Enduring LAMP page has out-of-date information.

Develop a network sufficient to solve the problem was just not happening.

About a year ago, my friend Mark Shea mentioned the use of Facebook as a project tool. (What a pity I didn't leap in immediately, but what-the-heck, at least Lawyers for Warriors didn't get mixed up in the great Vampire/Werewolf/Scrabulous wars of last year.)

So far, I've created the Cause, posted a few notes, and invited a few friends. The cockels of my heart were warmed to see 2 friends accepting the invitation before I had time to work on the graphics. I hope with a little bit of work, our collective intelligence will drive the project far, far beyond my own meagre abilities. We'll See!

Creating a Lawyers for Warriors Facebook Cause is basically releasing it into the wild, to grow on its own, with my help but no longer under my control. That's o.k. If Mark and the other theorists are right, it will grow better, smarter and faster. That's a good thing.

After all, the point is to meet the goal. Let's go!
at 8:42 PM No comments: Links to this post

Email ThisBlogThis!Share to TwitterShare to FacebookShare to Pinterest
Labels: law, lawyers for warriors

We are given only X minutes of life to live. We don't know what X will be for any of us, but we know it is finite (...and usually, too small.)

And when we're gone, all that lives after us is some DNA and some data. Until recently, that data was a few old photos, tattered letters to forgotten lovers, for a few some mention in a newspaper or a book published. Of the tens of billions who ever lived, maybe a few million rate even a wikipedia biography. The rest are gone, like tears in rain.

BUT: thanks to the internet (as preserved by google and the NSA) our data can survive as long as there is human life, perhaps longer. We still have only X minutes, but our thoughts, dreams and silly jokes survive us, to inform and perhaps amuse our successors. That most of it is trivia doesn't really matter; of all the millions of books and newspaper articles ever printed, most are junk too. There is some immortality in writing even the most trivial comment on a silly blog ... IF you sign your work.
We who sign our work (typically by pseudonym or handle) create the record that lives on after us. While we are here primarily to amuse ourselves, we have sufficient pride in ourself to take ownership of what we write. Bad or good, and mostly trivial, it is OUR work by golly! And if it's just a little bit better because we know our name is on it, that's o.k. too.
Anonymous trolling, OTOH, is a complete waste of time. This is not only because no-one respects the opinion of a troll, and certainly no-one changes their opinion on any subject of importance because an anonymous coward called someone a naughty word. Because their content adds nothing to the discussion, they are waste of time; but they are an even greater waste of time because they are anonymous. No-one can lay claim to them; no-one can present them to the next generation and say, "See? For better or worse, for good or bad, I lived and I created: here it is."

The time and place for anonymity is when the writer has reason to fear retribution. The crime informant, the spy, the battered child all need the protection of anonymity. But on a blog commenting on cartoons, politics, or just about anything, anonymity is merely pitiable.

If your local grocer is like ours, it has a small kosher section; although the items tend to be of higher quality, the prices are correspondingly higher and therefore I rarely shop the kosher section. 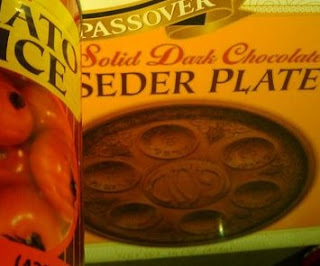 However, this time of year is the exception. In anticipation of Passover, the store fills its Seasonal section with "Kosher for Passover". It's got plenty of chocolate, large containers of matzos, and many other foods that would fit right into a non-kosher diet, e.g. cans of soups and bottles of juice. They tend to be of a brand we never see except this time of year, and they're a little pricey due to their special status.

But AFTER Passover, the store marks these items down substantially. Who wants to warehouse food to sell next year? These markdowns can make it very much worth stocking up. While post-Passover sales are far from the only post-holiday sales, unlike those after Halloween or Easter, the foodstuffs go far beyond candy and fruitcake. For example, today I just bought cans of kosher tomato sauce at half the price of non-kosher. (Although let's not overlook the chocolates ...)

These bargains don't last long; the whole point is to move the product off the shelf and if you wait, you'll have to wait until next year. A side benefit of shopping post-Passover sales is the chance to broaden your appetite a little (who knows, you may discover some food that's new to you that you like), but the real point of this tip is saving money by shopping post-Passover food clearance. And who doesn't like to save money?
at 7:41 PM No comments: Links to this post