Publishing a monthly newsletter for the WSBA World Peace Through Law Section has, as a great side-benefit, the requirement that I learn about new and interesting subject every four weeks.

Today is Constitution Day and, by coincedence, doing the newsletter made me research Alexander Meiklejohn, who turns out to have been a champion of our First Amendment!

Each newsletter highlights a presentation by the Section along with relevant quotes and links. Since this time we're hosting a presentation by Professor and Attorney Ann Fagan Ginger of the Meiklejohn Civil Liberties Institute, naturally I thought, "Hunh, who is this Meiklejohn? Did he or she say anything quoteworthy?"

In more than forty years of writing, Meiklejohn championed our First Amendment rights as necessary to protecting the very possibility of free self-government.

“Freedoms secured by the First Amendment – speech, press, religion, petition, and assembly - are absolutely indispensable for the preservation of a free society in which government is based upon the consent of an informed citizenry…”
”Free Speech and Its Relation to Self-Government”

I often find free speech uncomfortable, in particular when it's reichwing liars frightening old people with Death Panels and illegal aliens. However Meiklejohn's argument against Holmes' "Clear and Present Danger" standard is pretty interesting.
And in the internet era, it's proving to be much better to let clods and liars say anything they want, and the drown them with the facts. On today, Constitution Day, let us call for more heckling and less "Free Speech Zones"!
at 11:34 AM No comments: Links to this post

Jesus was a Jewish Communist

Just look at what he said:

Just look at what he did!

Look what his original followers did!

Now, I'm not gonna offer an opinion as to any of the above is a good idea, but don't you find it shocking that a network of TAX-EXEMPT organizations throughout of USA should be preaching such SOCIALISM!!!

UPDATED: The photo above is only a simulation of the actual Jesus, taken from my Roman Catholic Seminary:

Living in an apartment complex, I enjoy picking up the leaves that fall on the public patio and tossing them into the complex's planters. This cover the naked soil under the complex's plants, does all the benefits of mulching, such as returning nutrients to the soil and reducing moisture evaporating from the soil. This also reduces, however slightly, the need to clean the walks.

Unfortunately, the complex's contractors keeping "cleaning up" the mulch, carefully restoring the naked soil and tossing the leaves into our wastestream.

We need a way to re-orient the vision of the ideal public planter to include the normal mulching effect of fallen leaves.

Any thoughts?
at 10:12 AM No comments: Links to this post

Heckling is good. We need more of it.

Our leaders should regularly go before the legislature and the people, and have to take whatever questions are thrown their way, without the help of a press agent or an earpiece. "Question Period" in the Canadian House of Commons works fine, and it helps inform the public; maybe we should try it!

I urge this after having first gotten angry at Joe "the Mouth" Wilson shouting "You Lie!" during the President's joint address to Congress. It was a rudeness never before seen in Congress; previously Congresses have applauded and boo'd but never before had a guest speaker been heckled like that.

Some Wilson fans point out that once a pro-slavery member of Congress beat up another one with a stick, and Dick Cheney loved to use the F-word. I'm really not sure what kind of idiot could possibly think that those are points in their favor.

But after reading a fine article by Denny Westneat, I've rethought things. We need more of noisy dialogue, not less, because when you have facts and reason on your side, you need fear no heckling; you just have to be willing and able to hit back, hard and fast.

Teabaggers want it all their way; when they were in power, they wouldn't let liberals even hold hearings. The contemptible swine who ran the Republican Congresses were too cowardly to allow the other side a chance. I'm not saying we should forgive that; we definitely should not forget it.

But we should have faith that taking the high road works. Let the jackals howl at the lion; Obama can handle them, as he did Wilson, with a cheerful sneer. Let them shake their verbal fists in impotent fury; we can then dispatch them with equal passion, and logic and reason besides.

Meanspirited, stupid heckling like Wilson and his teabagging buddies practice, show We The People that they are mere jackals; they lost in November for a reason and we WANT to let them remind us what that reason is.

In Robert Lewis Stephenson's "Dr. Jekyll and Mr. Hyde", the kindly Dr. Jekyll invented a potion to let out all his negative energy;it turned him into the ruthless, angry and murderous Mr. Hyde. We need the Republican Jekylls to keep heckling, let it out, show the world who and what they are: quivering bundles of rage, lacking facts or reason.

Of course, there are limits. For example, urging unstable people to commit acts of violence is too far, and that's a line that some reichwingers have crossed. However, you'll notice that their leaders shy away, edging up to the line and hoping some of their followers will cross it, but not wanting to put themselves at risk. Like Dick Cheney, they have "other priorities".

But, Timothy McVeigh-wannabes aside, let's have more heckling. Don't let the HATEtriots pretend to be kindly Dr. Jekyll. Let them express their inner Hyde, and have faith in the good sense and good hearts of the vast majority of our fellow citizens. 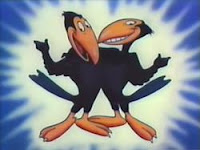 (With apologies to the delightfully chaotic magpies Heckle & Jeckyll)
at 10:29 AM No comments: Links to this post