I was going to wait until Monday for the next issue, but I suddenly learned of a couple of webinars early next week and didn't want anyone to miss them:

Going out to over 100 subscribers, and cross-posted here on my private blog, something for the lawyers (...although anyone can watch the on-demand programs ... maybe you'll like them!)

Kris won the soup contest at Big Al's tonight.
The flavor picked randomly last week was "Italian Wedding Soup." We googled a bunch of recipes and settled on The Barefoot Contessa's as a starting point. The one thing we weren't sure of was its use of ground chicken, which tends to be low in flavor, and chicken sausage, which can introduce flavors we're not sure of. One thing we especially liked is that the meatballs were baked separately, and once they were cooked enough to be safe and to have structural integrity, only then were they added to the broth to start sharing flavors.
The basic recipe (I'll leave out quantities, since your interpretation should depend on the particulars of your ingredients and preferences):
Make the Meatballs:
Cook on a cookie sheet for 30 minutes at 350 F.

Prepare the Broth:
Saute the veggies in olive oil for six minutes, then add the broth, dill and pasta. Boil to cook the pasta. Add meatballs and baby spinach.

The competition was fierce this week, as each competitor had a slightly different idea and flavor. However when the ballots were all counted, Kris came out ahead and was awarded a beer. A good time was had by all!

Next week: beef and barley. We're planning already!
at 9:46 PM No comments: Links to this post

"Obamacare Saved My Life" she said ...

"... Even though I had paid into their policy since I was practically a kid, now when I needed it, it wasn't there: I was no longer earning enough to be covered. ...."
This true story should melt a heart of stone: 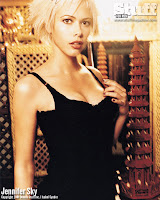 "When I began working as an actor as a teenager, one of the perks was comprehensive insurance coverage through the Screen Actors Guild. Up until six years ago, I never even needed it.

Then, one day, when I was 26 and living in Los Angeles, I experienced a sharp pain in my right side that lasted for hours. My husband drove me straight to the emergency room.

Turns out there were non-cancerous tumors taking up 60% of my liver.

When they finally did operate, they took a football-sized tumor out of my liver and pronounced the operation a success. I was left to heal from the large incisions.

The scar runs from right under my breastbone to my bellybutton, and across my stomach, and it is not an easy thing for a former Maxim cover girl to hide.

In fact, my whole diagnosis meant I had to retire from acting altogether.

Production companies take out insurance policies on all assets of their production, including their actors. With such a large scar and pre-existing condition, I was virtually uninsurable, even in the glamorous, fake world of Hollywood.

Acting was a career I had worked hard at since I was 15, but after my surgery I was dropped from my Screen Actor's Guild insurance. Even though I had paid into their policy since I was practically a kid, now when I needed it, it wasn't there: I was no longer earning enough to be covered.

Luckily, I was able to transfer to my husband's insurance. Then, last year, we separated. Part of our agreement was that he would allow me to continue to be covered by his policy, but, in the process, there was a terrible mistake.

One day I walked into the doctor's office for a routine post-op check up. After my appointment, I was about to leave, when the receptionist called me back to her desk.

"Jennifer? Do you have any new insurance for us to use?"

The white-coated woman nodded her head and handed me the phone, with the insurance company on the other end.

That's when I discovered my ex-husband's manager had made an irreversible filing error that resulted in me being kicked off his COBRA retroactively. In other words, my last eight months of treatment -- surgery, medication, MRIs at $19,000 a pop -- had not been covered.

It takes a lot to reduce me to tears, but that day in the doctor's office I was near hysteria.


"Please, I'm sick, I can't lose my insurance," I begged to the insurance lady on the phone.

It was too late, she told me. The decision had been made.

When I applied to Blue Cross, I was promptly denied due to "pre-existing conditions."


By the way, having your chest cut open is not the only way to be determined un-insurable.

Ever seen a therapist and been prescribed antidepressants? You have one, too.

Susceptible to chronic urinary tract infections or kidney stones? You guessed it.

In fact, it wasn't until our government passed the health care bill I so often hear referred to -- with a derogatory slur -- as "ObamaCare" that I earned the right to be covered under the new Pre-Existing Condition Insurance Plan.

Now I'm a highly functioning sick girl, and one who's unbelievably grateful to her government for the work Congress and the President did last year, giving me the ability to stay healthy."

Read Jennifer's Entire Story And Remember - This Could Happen To You:
http://www.lemondrop.com/2010/11/02/obamacare-saved-my-life-maxim-cover-girl-speaks-out/
at 8:27 PM No comments: Links to this post