A biologist for whom I wrote some FORTRAN code, way back in my undergraduate Work-Study years, told me what we had to do when we didn't have some key bit of data.


"Just SWAG it for now," he said, "As long as we state our assumptions, we can get some work done right away, and that'll tell us where we have holes to fill in."

What does SWAG mean? I asked.


The really interesting problems in life are those where you don't start with all the information you need. For example, my biologist boss needed to know the speed at which certain bugs at certain life stages (the "naiad instar" stages) swam when they left the muck at the bottom of a pond to the surface, where it shed its skin and flew away. The speed and the depth of the pond determined the length of time the bug was exposed to hungry fish, a matter of concern to bug and scientist alike.

We didn't know how fast those naiads swam, and we didn't want to hold up everything while some hapless grad student was put on the problem, so we SWAGged it at a meter a minute and moved on. The scientists were able to get some insights even when operating with estimates, and when they got actual numbers, they plugged them into the model and roared on. It was fun and useful!

Today's experiment is in a related field. Instead of a watery gap between the bottom and the top of a lake, which our frisky naiad seeks to navigate without getting eaten, we have a Justice Gap between the resources available and the resources needed to keep our fellow citizens from meeting an unfair fate in our justice system. Estimating what share of that gap can be assigned to pro bono, what share to legal aid, and so forth is absolutely necessary to effective planning, but it's also like figuring out how fast that little bug can swim. We need some graduate students with stopwatches and hipwaders, but until then, we have to SWAG it and ... who knows? ... maybe something will make it to the surface and take wing.

The Justice Gap is the difference between resources available to persons with a civil legal need, and the resources necessary to ensure a just resolution of that need. The numbers below are for Washington State, 2008.
No SWAGging so far ... give us time ...

In gross, we can figure out the absolute maximum reasonable number of lower-income persons who can be helped via pro bono by counting how many people are in the pool of legal professionals who might reasonably take on some cases, and multiplying by the number of cases they might take on each year.

Others (See Notes for derivation)

Pool of Other-Than-Lawyer Legal Services Professionals that might do Pro Bono: 10199

We can think of several reasons why Staffed Legal Aid programs are absolutely necessary.
It's beyond the scope of this post to contemplate how much of the Justice Gap should be closed by Legal Aid organizations, but since there's at the very least a symbiotic relationship between Legal Aid and Pro Bono, it's hard to think about one without thinking about the other.

Assuming that the pro bono efforts could be increased to absorb an additional 10% of the Justice Gap, and that legal aid organizations were increased enough to make that pro bono effort effective, we're left with 90% of the gap left. In round numbers, that is 72% of the entire Justice Gap (90% of the 80% of unmet need. Assuming that it was during our Legal Aid systems' best-funded years that the 20% of the Gap was closed, it seems unlikely that the 72% will be closed by Legal Aid alone.

Something Else Is Needed.

The nature of the "Something Else" that is needed to close the Justice Gap is not entirely clear to me. I'm hoping someone smarter than I can figure it out.

Running with that assumption:

One method might be to enable the community to develop its own, local experts, from within the community, who can handle some types of cases. An expansion of the Law Clerk program might allow communities to support members while they learn professional skills, then return to their community to serve without the crushing burden of debt. A large number of veterans might find it rewarding to use their limited GI Bill benefits to develop a career in community service law - but only if they were actively recruited to do so.

A complementary approach may be to make the legal system itself more efficient, perhaps using technology to help with the most common matters.

No doubt a dozen other strategies might be employed. There's plenty of opportunity to experiment.

Kitchen Scrubbies are useful but they wear out. Plastic mesh bags are annoying because they're too small to reuse as a shopping bag, and they're probably non-biodegradable, but they are common packaging for some food items, such as elephant garlic and apples from our favorite farmer's market. What do these items have in common?

This week's Change The World Wednesday challenge is


"...collect your garbage rather than toss it out. Continue to compost and recycle, but rather than take your bag of "real" garbage to the dumpster or put it out for collection ... keep it. At the end of the week, take a look at how much you've collected and consider ways to reduce it...."

This is a really good idea, but I needed to adapt it to our little apartment. In the spirit of "consider[ing] ways to reduce" my garbage, I analyzed each item we trashed. The very first thing I saw was a mesh bag that seemed obviously useful for something, but what?  It wasn't bulkly enough to be a scrubby, so (thinking of the world's largest rubber-band ball) 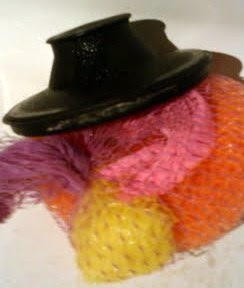 I tried accumulating these mesh bags around a scrubby. Maybe I'll grow the World's Largest Scrubby!

As you can see, Mr. Scrubby (to be formal) is coming along nicely. Doesn't he look natty with the kitchen sink plug topper? All he needs is spats and a stickpin!

Savings Analysis: Growing Mr. Scrubby is not going to make you rich (...unless you really do grow The World's Largest Scrubby, but remember: There Can Be Only One!) but it is a small improvement in garbage output and a tiny savings of money, in exchange for almost no labor at all.

Email ThisBlogThis!Share to TwitterShare to FacebookShare to Pinterest
Labels: Change the World Wednesdays, Green, how to, money

I remember, as a child, believing with all my heart and mind (...which were young and unformed...) that Roman Catholicism was the One Way to Heaven. All those Protestants, Hindus, Communists ... I felt sorry for them; they were doomed.

It followed from this belief that whatever the priest or the Pope said was true. Therefore I needed to believe it, because if I did not believe it, I too was doomed.

I can still call that feeling back: the fear that I am doomed if I don't not merely OBEY but BELIEVE is dug in deep. I ignore it nearly all of the time cuz I've grown up, but I can well imagine that some never have. Certainly some of my former seminarians don't seem to have, and for them I must feel pity.

Doesn't it seem, some days, that the Church Hierarchy is trying to see how strange it can get just as a test of faith? Apparently the General Assembly of the United States Conference of Catholic Bishops is about to issue an official message ("pastoral letter") denouncing sex within marriage for purposes other than making babies as "dehumanized" and "demeaning".

Lordy, am I reading Mad Magazine? It's almost as if the hierarchy is deliberately putting out nonsense to weed out those who have more faith in their loving spouse than in the Vatican. Rather than lead an inclusive Church, they wish to lord over a small band pressed into True Believing, as Asphalt says, tommyrot.

I can't imagine a Good God heading such an organization. Making one choose between Wife and Pope would be dreadful. In fact, using the fear of Hell to compel one to Obey nonsense reminds me of Simony. That's the sin of selling your special access to God's power; in the Acts of the Apostles it refers to a literal attempt by Simon Magus to buy an Apostle's power of working miracles. In 2009, it is (I propose) the use of the Church's purported special access to Divine Power to keep church membership up.

This sort of thing led to the Reformation. But in 2009, it may simply lead to an Abandonment.

(And thanks for being alerted to this by my bloggy buddy at Wholly Hodgepodge)
at 8:23 PM No comments: Links to this post

The Green Hawks and the Hippies should be Friends!

A Green Hawk believes that greening our economy is a matter of national security.

Thomas Friendmann recently wrote about the concept, arguing (if I may paraphrase) that even if global warming is a hoax (it's not) and even if hippie communal sandal wearers look funny (yes we do!), still the reality is that our planet has several billion people who will not stop trying to get to our American standard of living, and THAT will totally break any carbon-based energy economy.

It is indeed awkward to square a just and necessary criticism of free market capitalism with the equally just and necessary use of its enormous power for good. Power tools are like that; you can lose a finger or even more if you're not careful, but you wouldn't want to do without them. People who, like me, have concerns should ponder the Salon "interview" of Adam Smith; he's not necessarily who we think he is.

Now, I'll expect the next week to be filled with climate change deniers cherry-picking phrases from some stolen email and ignoring the debunking of their claims. But even if deniers are right (they're not) and those greedy climatologists are on the take from Big Wind and Big Solar (they wish!), still the Green Hawks are right. And a patriotic American would want our nation to be #1 into the solution, so as to reap the benefit, instead of selling ourselves to others, e.g. Chinese Solar Panel Firm to Open Plant in Arizona.

Of course, I understand patriotic Chinese saying the same thing about THEIR nation. Do your most, and may the best planet win!
And for a bit of fun ... since I said "Big Wind"