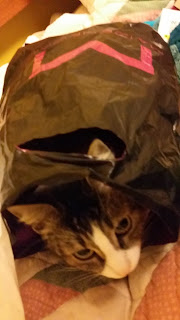 came to us from the street (or, technically, the back yard) where she had been living paw-to-mouth). She quickly establish her qualifications add an entertainer and had delighted us ever since.
One of her bits of character is her love of getting into things. She'll climb into any cabinet, box or bag she can reach, and if she sees one she can't reach, she'll miaow to be lifted up to it.
Last night Kris left a shopping bag on her bed in the Yellow Room, clearly intended for Imp's use. I swear that this photo was not staged or posed.
at 6:19 AM No comments:

It's Gonna Be A Smokin' Superbowl! ( #stonerbowl #NFL ) 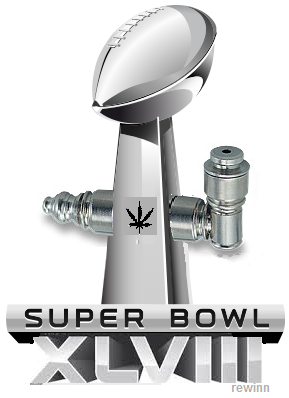 I'm not really a fan of professional sports, but when I'm at a bar I like to watch along with everybody else and cheer for the good guys. This has been a great year for the Seahawks and the game Sunday, which I watched at Big Al's, did not disappoint.
By now everyone knows that the 2014 Superbowl will be played between the teams from the states that legalized marijuana. I don't use weed, but two things are clear: (A) it's safer than alcohol, which is my drug of choice, and (B) it's the opportunity for a lot of humor.
I knew there were a lot of chances for humor based on the concept of "bowl". The expression "smoke a bowl" was in my vocabulary, and I confidently proceeded with the joke depicted, but soon ran into a problem: I didn't *actually* know what the process was, and couldn't find any really good pictures.
A good picture would be one that didn't require a lot of manipulation to merge with the Superbowl trophy. I stoutly refuse to sink the money to buy modern image processing tools (Photoshop is too easy!) and the only real drawback is that I need to have good matches when merging images. I suppose in the long run I'll have to break down and spend the cash ... but my patience was ultimately rewarded when I was reminded of those little metal pipes. It's a sign of my ignorance that I hadn't made the connection, but they were a nice visual match to the trophy and soon I had my image.
I tinkered with it a few times - the first version didn't have a properly 3-D looking connection between the bowl and the trophy - I image this is the sort of issue that an educated artist would have learned on day one. However picking this stuff up is part of the fun of the game but I suppose someday I'll take a class so I can focus my time on inappropriate humor!
at 11:49 AM No comments: