Are you are an attorney interested in providing pro bono services to veterans? This program will provide you with:
If you are interested in volunteering you must attend a day-long training. Trainings are scheduled several times a year. Learn more about the program.
Title:
Veterans Pro Bono Program Training
Nashville, TN
October 18, 2013
9:00AM to 5:00PM Eastern
Baker Donelson
211 Commerce Street, Suite 800
Nashville TN 37201
Baker Donelson will webcast the training live to 16 of its offices in the following locations:


The registration link allows you to select the webinar training you wish to attend. Register now! because space is limited.
If you are unable to attend this training, consider the November 22, 2013 training in DC
By:
The Veterans Consortium Pro Bono Program
More:
http://www.vetsprobono.org/volunteer-today/training-dates-for-volunteer-attorneys
at 4:40 PM No comments: Links to this post

Email ThisBlogThis!Share to TwitterShare to FacebookShare to Pinterest
Labels: veterans 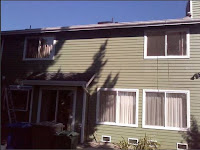 I spent Wednesday providing manual labor on a house painting job by my brother. It was a long day and it was the favorite work of neither of us, but there's some satisfaction in seeing the work getting done. It could not all be completed because the chimney at the end is strangely tall and we'll need to rent an extra-long ladder, but nearly all the work is done. I discovered in this process that I really, really do not like to be on roofs. This seems odd because roofs are very solid but that's the way of it. Dan does not like heights either but he showed the ability to gut through doing what had to be done. If you look closely you can see him up top, on a roof that was very hot from the sun.
Afterwards I joined Kris, her mother and sister, and many others at Big Al's for a Wednesday beer and grill. Manual labor does build a healthy appetite!
at 9:01 PM No comments: Links to this post 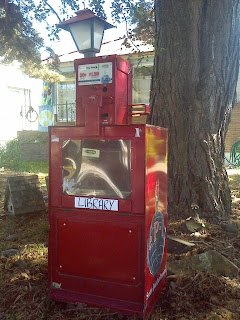 A while back, our neighbor Marcia (the block watch captain ... I call her "Captain Blockwatch") suggested our block put together a Little Free Library. This is basically a weatherproof box that is publicly accessible, that anyone can put books into and take books out of. It's a way to share books or pass them on in an informal way. Why discard a slightly battered paperback when someone else might enjoy it?
Many of us agreed this was a great idea, and we didn't do anything about it. Because, you know, everyone's busy! The idea resurfaced toward the end of summer, and then I realized that perhaps everyone was just waiting for someone to volunteer a space. I liked the idea of hosting it - it reminds me of my great-some-number-of-great-grandparents Ira and Susan Woodin, who hosted the post office in their cabin, and thus became the founders of Woodinville. So I volunteered our parking strip, and everyone seemed to think that was a fine idea. And we did nothing.
Monday as I walked back from Dan's Marcia greeted me and asked if I'd seen the thing in the paper. The VA Hospital article was uppermost in my mind (since I knew some of the underlying facts and people involved), so I said yes and proceeded to discuss it in general terms, as in, I thought it was great but there was more to do, I knew some of the people in it, and so on. Marcia replied something about it being a good thing to try, or something that I didn't quite follow. Our conversation went on for a several back-and-forths until we realized that we were talking about entirely different subjects.
A friend had told her that Second Use had some old Seattle Post-Intelligencer newspaper boxes for sale. These would make ideal little libraries. I said I'd go in on one, but we'd have to figure out how to get it home. I got back to my computer and saw that the place closed at six - no time to pick it up and I didn't know that it'd fit in my car anyway. I called them and made a reservation. Then I talked to Dan and we agreed to get it with his truck. This morning we went over there, got the item, and spent maybe a dangerous amount of time looking at the other wonders there. It really a fun place, and not incidentally a place to take something that may have some value but for which you have no use, such as a usable door or doorknobs. Home again, i settled on putting the box next our Narnia lamp. I wanted the opening to face the sidewalk so people could access it safely, and having its back to the big tree helps with the whole visual impact. I seeded it with a few battered books and facebooked the photo. Marcia's spread the word, adding it to the Little Library Database and generally encouraging participation.
This project has just begun. Our neighbor Laura and her son Mateo walked by and discussed painting it. Is it better to leave the box its historic read, or to accept that there are a lot of those about and it's ok to paint over it. We have some talented people on this block (both children and adults) and it might be interesting to see what they come up with. OTOH perhaps in 2049 the Antiques Roadshow would value an original P-I paper box very highly. Maybe we should paint over the original color with something that a future curator can wash off, leaving a surface for artwork that changes with the season. Who knows?
Anyway, it's nice to get started. Our neighborhood is truly awesome!
at 9:48 PM 1 comment: Links to this post