For the first time, I saw a bee servicing the tiny flowers of the stepping mint that I planted several years ago. Fascinating! 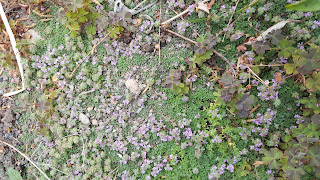 The mint has taken hold well, and I will soon be able to transplant some. Plants take patience!

Much of Monday I spent making small money, but there was a break at noon for a CRAB IRB.
CRAB is Cancer Research And Biostatistics, an organization that helps medical researchers keep and use scientific data. Since it involves human subjects, there's an Independent Review Board, or IRB, to overlook the implementation of ethical directive. I am a "non-scientist" member of the board, and therefore listen in on meetings about once a quarter, not with the role of making decisions about the science itself, but to help decide whether the process matches the standards. It's interesting.
Zoomba was, as useful, fun and I could tell I got a workout.
Dinner was the salmon that I'd got at the Farmer's Market. Kris bargained it with bacon and baked it superbly. A side dish was succotash, again using some of the bacon I'd bought for the upstairs. It is all reasonably pleasant housematery, with only a dash of oddness as Kris thorough inhabits the upstairs; I am allowed in the kitchen to dispose of waste and accept a dinner plate, and thereafter well there just isn't seating for me. Whatever.
Today Kris emailed me about the tax refund, inquiring whether it had been submitted electronically. I responded politely pointing out that she had physically signed it with a pen and it had been mailed because filing electronically would have required giving me access to some sort of IRS PIN for her, which I did not especially want. I offered to help if she was having a cash flow issue. She replied that it was alright, she had just forgotten; also that she was just working on getting money together for moving out, finding first and last month's rent and so forth. I suppose some people who have refrained from saying, in effect, "I am working on screwing you over, do you think you can help?" but this has been Kris' pattern so it's reassuring in a way.
And the salmon was excellent.
at 10:00 PM No comments:

FROM THE DEPARTMENT OF UNINTENDED HUMOR DUE TO SLOPPY SCHOLARSHIP: Both the Majority and the Dissent in Obergefell v. Hodges cite Maynard v. Hill,125 U. S. 190 for the proposition that "Marriage" ...  [has long been] ‘a great public institution, giving character to our whole civil polity’" and "the foundation of the family and of society, without which there would be neither civilization nor progress”.
These are noble words and true, to be sure, but when David "Doc" Maynard, Seattle’s first doctor, second lawyer, booster extraordinaire and drinking buddy of Chief Sealth is involved, the story must be more complicated.
In the 1850s, Maynard and his wife Lydia were leading figures in developing Cleveland from a town of 500 to a small metropolis. However, they lost a fortune in one of the periodic Panics that ravaged America before FDR's reforms. Why David left Lydia and two adult children to strike out West on a mule is disputed, but it is known that when he arrived in Seattle he claimed a married man’s tract of 640 acres, plus the love of Catherine Brashears, a widow who he'd  met on the Oregon Trail and saved from cholera.
David and Catherine became Oregon Territory's original power couple; the Legislature showed its gratitude by granting David a divorce from Lydia. Thereafter Catherine and David wedded and, by all the evidence, lead a happy and successful marriage, developing much of the early Seattle downtown.

However, a certain Col. Larrabee noticed a weakness in Maynard’s claim to what was rapidly becoming valuable property: what was Lydia’s interest in the Maynard Donation Claim? Larrabee  reportedly paid her a nominal sum for her share, and sued to take possession.


Lydia came to Seattle to give testimony; legend has it she put up at the Maynard house and Doc casually strolled Front Street with a wife on either arm.

By this time, much of the land had been sold, so the real effect of the decision would be to throw a lot of innocent third parties out of their homes, leaving Larrabee with valuable real estate already improved. The scale of the money involved may be estimated by the fact that the United States Supreme Court. was asked to decide whether the Legislature was empowered to alter the Maynard marital arrangements.  After much weighty analysis, including the lovely language quoted by both sides in Obergefell, the Court said “yes”. The divorce was effectual; Lydia’s interest had not perfected before the divorce ended it;  Catherine never had an interest; and therefore the land went back to the public where it was taken by (to use the phrase of the day) “land sharks”.

And so back to Obergefell.  There is unintentional humor in the dissent's use of Maynard:

“This Court’s precedents have repeatedly described marriage in ways that are consistent only with its traditional meaning. Early cases on the subject referred to marriage as “the union for life of one man and one woman,” Murphy v. Ramsey,114 U. S. 15, 45 (1885), which forms “the foundation of the family and of society, without which there would be neither civilization nor progress,” Maynard v. Hill,125 U. S. 190, 211 (1888).”
The factual basis of Maynard is that the traditional marriage of David and Lydia failed. Had that marriage continued "for life", Seattle would have lost its most effective early developer and power couple. The Obergefell dissent appears to endorse as "traditional" the abandonment of  a marriage with children in favor of another which is childless, but helpful to progress and civilization in other ways.  Whatever one may think of Boeing, Microsoft, Amazon, Costco and grunge, the Pacific Northwest’s contribution to progress and civilization would have been much the less but for the ending of the first Maynard marriage, as supported by the Maynard court and, perhaps unintentionally, the Obergefell dissenters.

[P.S. Maynard v. Hill also stands for the proposition that factual asssertions in Supreme Court decisions should be fact-checked. for one thing, it states Maynard moved to Ohio in 1850, when actually it was a decade earlier.]