The First Half of Our Last Move 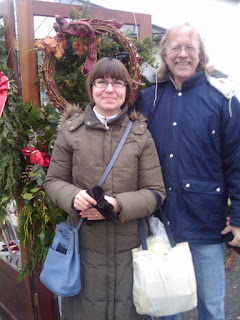 I'm not fond of moving. All that packing and planning and hauling and dropping and unpacking, just to end up in a place to live in that you'll probably just move from again sometime. Why bother, since you can be happy almost anywhere anyway?

Kris & I have lived in the same building (The Centennial Court) for longer than I've lived anywhere since I was a child. Our stacks of Stuff buildt up, especially in those storage spaces we rented to just temporarily hold the overflow and could sort through them. You can imagine how quickly that happened; a few years ago, I added a 2nd storage space. We were pretty settled. But ...

We like the Centennial; it's convenient and the staff is excellent. However, we needed to think of our future. We don't plan on working forever and, while retirement is a long ways off, we didn't want to be renting thereafter. The time to move was now, and waiting wasn't going to help. So we started looking around for a house, with the following characteristics.
We're not looking to flip; we're looking to settle in and invest for the longest possible term. As Kris puts it, "The only way we're leaving that place is in a box!" After months of looking around, we found the right house in the right neighborhood. The big problem is that it's a short sale, which means that setting a closing date depends on a lot of things, and it could fall through at the last minute. However, we've looked around and this one fits our criteria better than anything else. So how can we solve the problem of not knowing when closing happens?

Going month-to-month in Belltown is very expensive, yet we didn't want to sign a year-long rental agreement hoping that we'd break it partway through; that just didn't seem right. We tried a 3-month extension, which was well enough, but not really good enough.

One day, we decided to have a look at the home we're buying (subject to Freddie Mac) ostensibly to plan the first year's garden, but mostly because we enjoy looking and planning and, frankly, dreaming. I remembered that on an earlier trip around the neighborhood (confirming that it was a neighborhood we'd like now and for decades to come) I had seen a few "For Rent" signs. We thought perhaps we'd see what was available in the area. So we drove to the house, looked around a bit, and then thought, "Where have we seen a For Rent sign?"

How about 1 block north? On the same street?

It hadn't been there before that very morning. Ron and Claudia, the couple who owned the place, were almost finished renovating it and were looking to get it rented. We promptly called, talked, met, discussed and ... long story short ... committed to a 3-month rental with month-to-month thereafter. This has numerous advantages:
In a way, we're moving to our ultimate destination in two steps. The first step was a dooozy! We had a lot of help from a lot of friends but even so, I think it might have been better to just put a "Free Stuff!" sign on our door and walk away. Well ... too late now, we're done and settled in and the memories of the horror are fading away.

We like the house we're renting. However long we must stay, we'll be o.k. Ron and Claudia are really easy to get along with, and I think it'll be helpful to have friends who know as much about houses as they do. Plus, we're having the chance to experiment with house living before making the Irrevocable Commitment. So far, we love it, but we'll see.

We miss our friends at the Court, and will try to see them from time to time. But we're already exploring West Seattle (see photo above) and well content with the 1st half of our last move.
at 9:25 PM 2 comments: