Seriously, after barre today I put on the jeans I'd stuffed in my gym pack, and noticed I hadn't included a belt. As a result, the pants which were snug last were were heading toward my knees! I had to hitch them up with one hand like some sort of overage whitebread homeboy. It's not the worse thing in the world, to be somewhat more fit than I was last year, but it is kind of funny.

Then while on a quick train trip to Tacoma, I saw Sherry post this of Kiera and her buddy Danny ...


Just Converted This From VHS Danny Banks and Kiara Hudson back in 2003 Dancing The "Jive"
Posted by Douglas Banks on Saturday, January 2, 2016

...that from the anvil one could draw the Sword.
As each knight took his turn
He found the Anvil held it firm,
None worthy of a future King and Lord."


I've liked Rick Wakeman's "Myths and Legends of King Arthur, etc. etc." for more than 30 years, but how long ago it was - and how young I was - when first I heard it.
In 2016 I plan to attend the 50th Anniversary of the SCA, as a chance to meet with friends from that time, and because I'll need a vacation by then. I might be able to fit in the Sylveastan surcoat, when I dig it up!

This New Year's Day I tested no swords, although I did finish S.MStirling's latests Emberverse chapter, The Golden Princess. It was basically the first act or perhaps the first scene of an epic, in which Our Heroes Get The Band Together To Do A Show - or the Heroic Quest equivalent. While there were a few good bits - rousing battles with bad guys and all - it was mostly tedious introductions to characters we might care about later, but who for the moment are of interest only as the children of characters from the last series, and children carefully avoiding their parents as they secretly sneak away. Other than the decision to go on the Quest - a bit of a no-brainer, really - there were literally no decisions of consequence to make - a few desperate fights to survive made the first half tolerable, but mostly it was exposition. Let's hope the next has some plot or something.

I am enjoying having my housemates back. We don't actually interact all that much, but they are amusing!
at 10:33 PM No comments: Links to this post 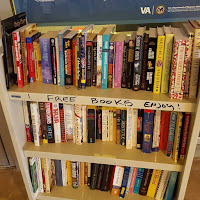 On this Sunday after Christmas, I assembled a load of books to drop off at the VA Hospital. It was a little scantier than usual; because of the holidays I've been less active organizing donations, but I filled three shelves on each of three book carts, so that's something anyway. I am getting more organized with the new shelving - the best price was a wonderful set from Costco - and generally getting faster at skimming through the donations and tossing the more obsolete textbooks and paperbacks too battered to use. It's a satisfying activity, and I like making the delivery on Sunday when the hospital is relatively quiet. There are a few regulars there - the lady at the sign-in desk, the Recreational Therapist who wears hats - and I usually reward myself with a soda from the machine.
Afterwards I did a few chores - this week it was an oil change - and stop at Pegasus Book Exchange for more book fun. This week I picked up a copy of Upton Sinclair's The Jungle - one of those classics I've never gotten around to reading - in graphic novel format - because I love the format. Let's see how it works! It was fun talking it over with the staff too.
Other than that, it was housecleaning, cooking ahead for the week (chicken, rice and cornbread) and goofing off - after all, it's the Day Of Rest! I suppose I spent too much time on Facebook but so long as it doesn't get in the way of work and exercise, I'll be o.k. I'm getting used to my new hours and even the cats seem to be getting by- with the help of a plethora of new toys from the Clines and others!