UPDATED: Glenn Beck's is available too:

Jesus for the Non-Religious: You Might Say This is About "Original Intent"

Four years of Roman Catholic seminary revealed to me that, to be blunt, modern Christianity is a Rube Goldberg contraption, full on contrary and peculiar ideas (e.g. Transubstantiation, the Trinity), founded in obsolete conceptual schemes (e.g. form vs. substance), larded with factually incorrect stories (e.g. the role of Bethlehem in a Roman census), held together by naked assertion of authority and above all, not well suited for addressing practical problems.

More fundamentally silly is theism: the claim that there is a supernatural creature who fiddles around with natural processes and responds to prayers and sacrifices. If the latter were true, then God would be just another force of nature subject to scientific analysis; if it were false, then most religious ritual would be reduced to trying to earn a happy afterlife by cosmic suck-uppery; not inconceivable, but lacking in dignity.

Founding morality on the idea of pleasing God is completely irrational. If you do good out of hope of heaven and avoid evil out of fear of hell, you're not really good; you're merely calculating; it is far better to do good and avoid evil for its own sake, but this leaves God with nothing to do.

But: Christianity is my heritage. I was not happy to give it up simply because its factual claims aren't true and its moral guidance is either trite or useless.
Lucky for me, a fellow former seminarian recommended Bishop John Shelby Spong's Jesus for the Non-Religious to me and I am glad to report that it has turned me into a Christian again. I am not a Catholic or a Protestant; I am an "Original Intent" Christian; I hold with the original intent of Jesus, as near as we can figure out, which is very different from the supernatual circus of the organized churches.
Seven decades of study, priesting and writing gives Spong the ease of a master craftsman, putting Christianity on the workbench and showing where two thousand layers of paint has left it a lumpy mess. He helps us sand off the accretions of centuries, looking for the "original intent" (if you will) of Jesus. It is a messy and disturbing journey but well lead; if one has the courage to go all the way, it is a relief to find that the message of Jesus is non-theistic, non-supernatural and above all, not founded on the perverse notion that we are all damned by an error of a mythical First Man.
It can be disturbing to realize the extent to which the Gospels are fiction. While the existence of an actual, historial Jesus of Nazereth is extremely likely, most of our favorite stories are more like litergical plays than history. This is less surprising if you recall tht the notion of history as an impartial record of facts is fairly recent. The purpose of history was, at the time, for the edification and improvement of students, so rewriting stories to that end our be program and natural. At any rate, many of the factual claims simply cannot be squared with what we know of the time, e.g. the census story, the Star of Bethelehem, the dead walking on Good Friday, the curtain of the Temple being torn top to bottom : none of these are true because they can not be true, given what we know of the time. This does not diminish their value as stories but it alerts us to the likelihood that the whole thing is a story.
It's worth noting that the fictions are not very helpful when it comes to making moral choices. If it were proven that Jesus were not born in Bethelhem, would you really start stealing candy from babies?

(It's worth noting that many of the miracle stories in the Bible are simply magic tricks known at the time: Sticks-to-snacks, multiplying objects, water-to-wine. See The Ancient Engineers by L. Sprague de Camp.)

To the fundamentalist challenge: "Jesus is either lunatic, liar or lord!" we can now reply, "No, he is a Legend."
So what is Jesus' key idea? What was he really going on about that so affected his followers? Spong's analysis is the universality of humanity. Until Jesus, religion and spirituality was dominated by tribal gods that set people apart for special favor (most especially including the God of Abraham, Isaac and Jacob). Jesus offered instead a Father of us all; all people are Chosen, none are inferior. There is neither Jew nor Gentile, slave nor freeman, male nor female: all are one.
This is a really good idea! but I can see why they may have killed him for it. If you base your notions of self-worth or authority on divine favor, you may not want some kid saying "nu-uh!" Original Intent Christianity also requires no reliance on a supernatural, external and meddling Being, so it's fair to say it's an atheist Christianity. For that, I thank the good Bishop and will recommend this book to anyone interested in religion.
at 11:06 PM 2 comments: Links to this post

This state-by-state listing of Legal Assistance to Military Personnel (LAMP) resources is under development: help us here! If your state is not listed yet, leave a comment and I'll make it a priority. The purpose is service!
Nationwide, see also: the ABA Standing Committee on Legal Assistance to Military Personnel. Regrettably, its state-by-state list is out of date but it's a good place to start!
at 1:09 AM No comments: Links to this post

Email ThisBlogThis!Share to TwitterShare to FacebookShare to Pinterest
Labels: law, lawyers for warriors

Mafia vs Private health insurance: who is more honest?

If you win a big jackpot at a casino, they pay out.

Heck, if you win a big jackpot in an illegal numbers game, they honor their commitment.

But if you pay health insurers for coverage and need expensive treatment, they try to weasel out of paying up, even if you live in a state where that is illegal.

Insurance company CEOs have confessed to Congress that if you get sick with a condition that is expensive to treat, such as cancer, their computer programs go through your records to see if there's any way they can cancel your coverage.

In contrast, if you don't submit a claim, they do not use their programs to see if they should rescind. They keep your money even though they would refuse to pay off if you got sick.

You're supposed to make the payments; you're not supposed apply for care!

Mike Konczal of the Atlantic magazine has done the math for us:

"It should be fairly clear that the people who do not file insurance claims do not face rescission. The insurance companies will happily deposit their checks. Indeed, even for someone in the 95th percentile, it doesn't make a lot of sense for the insurance company to take the nuclear option of blowing up the policy...

If the top 5% is the absolute largest population for whom rescission would make sense, the probability of having your policy cancelled given that you have filed a claim is fully 10% (0.5% rescission/5.0% of the population). If you take the LA Times estimate that $300mm was saved by abrogating 20,000 policies in California ($15,000/policy), you are somewhere in the 15% zone, depending on the convexity of the top section of population. If, as I suspect, rescission is targeted toward the truly bankrupting cases - the top 1%, the folks with over $35,000 of annual claims who could never be profitable for the carrier - then the probability of having your policy torn up given a massively expensive condition is pushing 50%.

( How Health Care is Like Zombie Insurance, Jul 29 2009, Atlantic magazine)

Roughly half the time that health insurance would have to make a big payout, they find a way to avoid it.

Watch the video. There is no conclusion except that health insurers are less honest than organized crime. 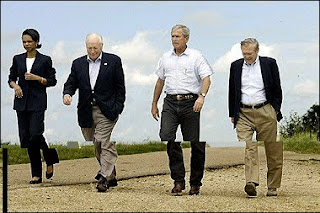 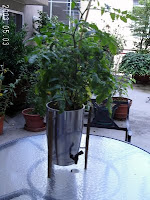 The term "Repurposing" is a fancy way to say, "Don't throw stuff out if you can find another good use for it." You can do it to be frugal, do it to be smart, do it to help save our beautiful planet, or do it for fun ... but just do it!
My favorite repurposing is a cool old coffeemaker, the kind that looks like it came from a 1950s-era Rocket to Mars, that was going to be thrown out because it has no lid nor cord. I volunteered to give it a home and the result is in the photo to the right.
I left in the coffee basket & supporting central tube, partly because I needed only a little soil to grouw some nice bushy tomatoes, and partly in case someday I wanted to de-repurpose it back into a coffeemaker.
One especially delightful feature is that when we have heavy rain, the soil gets soggy but no problem! Just open the tap at the bottom and the excess water drains out!
This coffeemaker planter seems to work best with relatively low and bushy plants; shown is last year's small volunteer tomato. This year, I tried growing a small sunflower in it but
If you look around, you can probably find a lot of stuff you can repurpose, and save a lot on shopping & throwing away. Give it a try! And thanks to my blogbuddy at Reduce Footprints for suggesting the topic of Repurposeful Crafting; her Wednesday challenge is fun!
I have often repotted plants but this is one of the rare times that I replanted a pot!
at 1:33 AM No comments: Links to this post