Responding to a ThinkProgress report on a NOM rally, I joked


"Look what happened in Washington State! we got marriage equality and promptly won the Superbowl. Would you want that to happen nationwide?

This got me a few laughs, which I had intended, and then someone chipped in


That is simply not true. What happens is that you pass marriage equality in Maryland and the Ravens win the Superbowl. Oh wait. That's two for two now isn't it? Vote for marriage equality, win the super bowl. Notice the trend?

Then another person wrote


What is going on here?The interwebs is having a joke, yes, but it is also THINKING. A little research here and there, and suddenly we all are smarter. This provided the foundation of the meme I posted at the top of this article.
Now this is just a joke, not a huge thing. Although marriage equality *is* a huge thing, and to many people so is the Superbowl. But what may be the biggest thing of all is the process by which this thought came into being. It is an example of how the internet is making, not each of us smarter, but all of us smarter.
Or at least funnier. 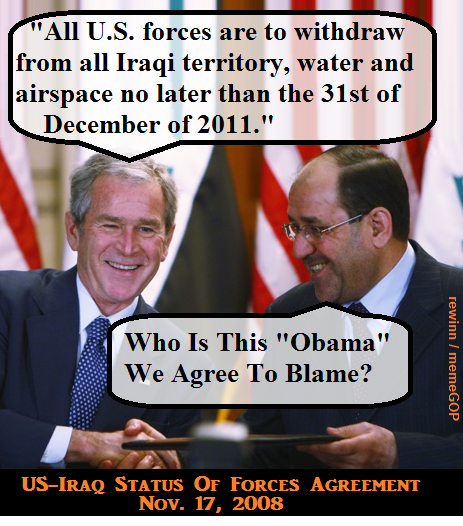 
"All problems stemming from this agreement shall be blamed upon Barack Obama. He shall be responsible if anything goes wrong."

Truly this was an amazing piece of foresight on the part of America's strategic thinkers!
The failure of Obama to solve problems created by his predecessors, and possibly dating back to the collapse of the Ottoman Empire, only goes to prove that George W. Bush was right to invade Iraq, to keep America from the soul-destroying Hellscape that would have been peace and prosperity.
at 4:36 PM No comments: Links to this post