I recommend Sky Map on Google Phone as free fun! 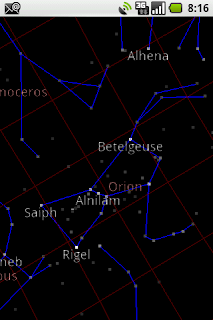 I got the google phone at Costco late last year when my Blackberry finally croaked. I liked the idea of its Android operating system being open-source, as inherently more secure and more likely to have applications with a little more creativity.

Well, I don't know whether my reasoning was good, but I've downloaded a whole lot of free applications, and the one that I'm enjoying the most is SkyMap, which maps the sky where you're pointing the phone. Look West? Hey, both Mercury and Jupiter are above the horizon right now, and Sky Map can tell you which is which.

Naturally, it identifies cardinal directions, but even better, if you set your phone down, it points to the Nadir, which naturally forced me to check out directly overhead - sure enough, it's the ZENITH and BTW M31 (a.k.a. the Galaxy in Andromeda) is at this very moment directly above my head: probably the further object visible to the naked eye and certainly the heaviest!

Here's a blurry demo, but the reality is way better:
at 3:24 PM No comments:

Following a link on ReduceFootprint, I just ordered some heirloom seeds from the aptly-named rareseeds.com. The price per packet was comparable to that for non-heirloom varieties in my local store (I've bought 3 packets there already) and shipping was only $3.

I hope this works! Last year we grew some heirloom tomatoes from seedlings we got from a roadside stand, and they were very interesting! Our apartment's patio doesn't have a huge lot of space but everyone enjoys watching the plants grow so I think it's a win-win-win!
at 1:07 PM 5 comments: