We gotta be free

Today I took off work to hop a bus to Redmond for some user interviews. It's a sad fact that in two hours of work there I make a little more than I do at my current job
- but that's life! Perhaps I should just be happy with today's opportunity and forget the alternate timeline in which I took the Microsoft Orange Badge gig in the late 1990s instead of WSBA. What a change that would have been!
When the opportunity first came up I assumed I would drive, but that would have been madness. Seattle area rush hour is no fun! I checked the Metro KC trip planner and it assured me there was a route with only two transfers, which didn't really matter thanks to my pass. There was a few minutes of drama downtown as my stop was closed for construction but thanks to a nice passer by I was directed to where I could pick up my 2nd bus.
I got a nice photo going over the lake!
The event itself was fun, and thanks to the NDA all I can say is I talked a lot without a single "um"!
Coming back started out dramatically as I had neglected to plan out my route; my bus going there was not the optimum bus back. Again passers-by directed me to the most convenient spot to pick up the 545 back to Seattle and here I am! 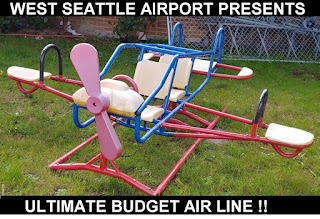 You will never be #JimmyCarterBadass 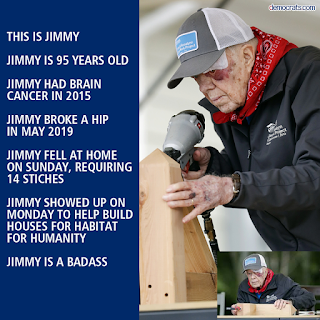 Email ThisBlogThis!Share to TwitterShare to FacebookShare to Pinterest
Labels: politics, The Right Thing To Do, Things That Make You Go Huh

As we move into the dark season 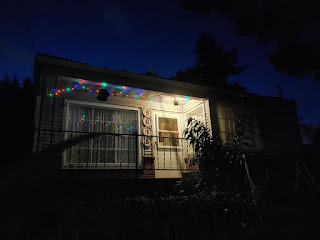 ..., these happy little lights become more important.
I leave my outdoor holiday lights up all year. Why not? They are cheerful, and as the days get shorter, we need the cheer.
at 6:30 AM No comments: Links to this post


About a week ago my left ear started clogging up as it does about every year or two. The first couple of times this happened, I researched and discovered "Onion Earmuffs", a folk remedy that worked. You half an onion, heat it in the microwave, and hold it to your ear. Managing the heat is an issue - I wrapped it in wet clothes - but the heat itself and perhaps the fumes solved the problem.
Then came the time this didn't work. I went to a doctor who blamed it on earwax buildup and flushed. This was an uncomfortable procedure although not really painful; it just feels wrong to put thing in your ear and it was also ticklish.
The ear flush cost about $150. I had not met my insurance deductible it was all chargeable to me and I might as well not had insurance at all.
The next couple of times this happened I tried over-the-counter ear wax remover. This worked ok.
This year, it did not solve the problem. It gave immediate relief but the pressure returned after a while. Pressing or rubbing relieved the problem temporarily and it did not keep me from sleeping but I was concerned that there might be an underlying problem, such as an infection.
I called my insurer, who had a helpful nurse's line. She suggested coming in to a clinic and mentioned Bartell's had some. I called around to find the one in Jefferson Square had a "Care Clinic", but not the one in White Center.
The Care Clinic was just about the same as the doctor's visit before. My left ear had almost no wax (thank to the over the counter treatment, I suppose) and the right had plenty. The clinician mentioned my holes had a curve that made viewing a little difficult but that was well within the normal human variation.
She flushed. The wax came out. She then said it appeared there was no infection, I just had swelling in the Eustachian tubes that would block the passage of air, causing pressure. I could take an over-the-counter to reduce the swelling (either an anti-histamine or something else) or a nasal spray to stop the underlying cause. The charge was about $125 with a $25 co-pay.
So I'm automatically out the $25 and the insurance company is billed the $125. Since I haven't done anything else with my insurance I'll be out that two unless I still have something in my HSA.
I'm not sure that I'm getting any benefit from this so-called health care system except as a backstop in case I have serious problems. 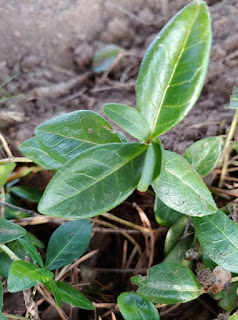 I love periwinkle (Vinca Minora) as a hardy groundcover, but when it tries spreading onto the sidewalk it's time to transplant. Here's its new home on the local roundabout. It has successfully persuaded humans to help it spread further so ... who really is the intelligent species?
at 9:12 PM No comments: Links to this post

You ever get to the gym and discover you forgot to pack your workout shorts?
This Saturday was that day. I felt both stupid and disappointed because I like the sweat and I know it's good for me, plus it's a chance to say hi to some friends.
I turned to go home, but stopped. My jeans have been loose lately; could I exercise in them? They were snug when I bought them, because I had resisted going up a size. But now? Maybe they had stretched out from wear; maybe I had toned up from regular exercise. The only way to find out was to experiment:
* Full squat - no problem!
* Deep plie' - ok!
I emptied my pockets, got on the floor, and hoped nobody noticed.
Nobody said anything. We were all fully occupied making sweat, not checking out the fashion. I got my full workout plus a happy lesson: while all this regular exercise did not cut my weight, it firmed me up pretty well.
After class, I boasted about this to the instructor, who laughed. "Yeah, I wondered why you were wearing jeans today. I figured everybody has their reasons. **eyeroll**"
We laughed. It turns out it's not true that nobody notices, but as long as you're getting done what you need to get done, who cares?
at 9:11 PM No comments: Links to this post

A Crowd of Potatoes Going Off To Work 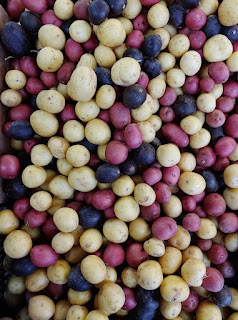 Another beauty of Fall: New potatoes at the veggie stand!
at 1:00 PM No comments: Links to this post