McCain-Obama Bill Would Be Cool

Senators McCain and Obama will, for the next two months, be in the Senate together. What could better bind up the wounds of this campaign than a "McCain-Obama" Bill?

It might be "only a symbol" but symbols are important. The Senators have expressed a lot of ideas in common, the most important of which is that we all must work together, now that the campaign is over. McCain's concession speech is a classic of graciousness and patriotism, for which I salute him. If you haven't seen it, take a moment - it's worth your time: A McCain-Obama Bill could show the way.

The possible subject matter is broad, since the two agree on many things. Energy independence would be a good, easy but important target. Mandate that 50% of all federal, non-military vehicles purchased use alternative fuels; this would give Detroit a big kickstart into an important technology. A better move would be to renew the tax credit on wind and solar projects.

Or the subject matter might address both the housing crisis and veterans issues, by directing that some of the already appropriated bailout money be used to put the homes of veterans facing foreclosure into a Veterans' Housing Trust, which would continue to make mortgage payments (probably at a rate reset to reflect market conditions), while the veteran rents the home from the trust at a do-able rate, paid if necessary out of the veterans equity share or, if absolutely necessary, by drawing on the resources of the Trust. It's doable if you think about it.

There are plenty of other possibilities. What the subject matter turns out to be is not so important as that there be a start. The bill should be short, simple and to the point, since the goal is to get started rebuilding our great nation.

...yesterday was the most remarkable day of my time as a polling inspector. The first voter came at 6:31. I welcomed him and said we weren't open for voting until seven. He just silently pointed to his book, which he patiently stood and read until 7. I guess he really wanted to be first to vote.

More voter came as we set up. It was raining and other than the bookman patiently standing, they were waiting outside. In the rain. I waved them inside. By 7, the atrium was full; voters lined up from the polling judges' stations to the doors.

At seven, we began and we never stopped. At 7:22 we had 25 paper ballots cast, and I don't know how many absentee or AVU. No time to check. Keep things moving. There is a line of people waiting for the voting stations; we got some more tables and chairs for people just to sit in the open and mark there ballots.

Every couple hours there would be a slack time with only 3 or 4 people voting. We had a long ballot, with a lot of initiatives, and people took their time.

Around 7:00, the tide went out. There still was always someone voting at all times, but when the polls closed a 8, there was only one.

A delightful way to end in-person voting.
at 7:30 AM No comments:

Look in the Mirror, Red Light was Blinking ....

...them cops was after my hot rod Saturn?

No, that's just a fun rockabilly song by Charlie Ryan. The reality just a couple of hours ago was less fun but more instructive:

Lights Flashing! Signal lane change and pull over. He's not going by! Argh! Pull to curb. Stop. Engine off. Dome light on. Let the nice policeman see everything's cool. Just like the book says ("How to Avoid Speeding Tickets!" by Matt Reynolds ... a useful guide for dealing with police who are, after all, just doing a job). Seattle's not a dangerous place but why be a jerk?

"I pulled you over because your tabs are expired. We are being videotaped. License, Registration and Proof of Insurance".

My first impulse: My goodness, he's so young! He must be a kid, more 20 years younger than me. Wait, that puts him in his early 30s. How could that happen? Thfont-style:italic;">Let my pain save you future pains!

Email ThisBlogThis!Share to TwitterShare to FacebookShare to Pinterest
Labels: Don't Be That Guy

Oath of Inspector: The Final Chapter

Tuesday, for the last time, I take the Oath as Voting Inspector at Mercer Island High School. 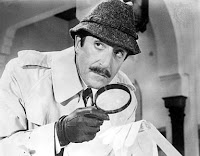 It's been many years of long days, but definitely something I'm proud of.

"I, the undersigned, do swear (or affirm) that I will duly attend to the ensuing election, during the continuance thereof, as an inspector, and that I will not receive any ballot or vote from any person other than such as I firmly believe to be entitled to vote at such election, without requiring such evidence of the right to vote as is directd by law; nor will I vexatiously delay the vote of, or refuse to receive, a ballot from any person whom I believe to be entitled to vote; but that I will in all thinkgs truly, impartially, and faithfully perform my duty therein to the best of my judgment and abilities; and that I am not, directly nor indirectly, intrested in any bet or wager on the result of this election.

I don't remember when I started doing this; it must've been when I was still living on the Island, and I'm glad I could see this through to the end. We're changing over to all mail-in balloting after this election, which makes a lot of sense, but I'll mess the community feel. The High School staff were GREAT - always helpful and often they plied us with coffee & doughnuts. I enjoyed watching the hurry-blurry of the kids rushing by too; they were polite and curious and full of energy!
at 5:19 PM No comments:

When I read that America's GDP has fallen ( meaning we're producing less and selling less ) while ExxonMobil announces the highest corporate profits in history - any place, any time, throughout all history - the reichwing reaction is to reply that Big Oil's "margins" are really, really low.

As if that matters. It doesn't.

By "margin" they mean either the percentage of profits over sales, or the percentage profits over assets, or some combination thereof. Their exact definition varies, but it doesn't detract from the simple fact that Big Oil makes so much money that it threatens our democracy's survival. The "marginal profit" argument is nonsense, but it has the function of distracting from that reality.

The nonsense of the technical argument is clear when you compare Big Oil to the canonical penniless boy selling apples on the streetcorner. He buys apples on credit at a penny each and sells them for an nickel.

Thus his "margin" is gigantic: sales of 5cents on costs of 1cent is a margin of several hundred percent.

Or let's figure it on the basis of assets. He is by definition penniless; he has no assets. His profit margin, therefore, is infinite.

Thus the penniless appleseller on the streetcorner have a vastly higher margin (however you calculate it) than Big Oil. By reichwing logic, he is more successful than Big Oil!

P.S. the canonical streetcorner appleseller is a thing of the past but a very creative and useful replacement is Real Change, a newspaper that helps the homeless set up their own small business. The key (to me) is that this is not charity: the newspaper is a real paper, with real value. I buy it every week not out of charity (...although I do feel good about it...) but because it covers different stuff than the regular news. Look at their archives: http://www.realchangenews.org//pastissuesupgrade/archive.html It delivers good value for the money, which is smart and, I hope, a source of price. I highly recommend it:
at 9:51 AM No comments: