How Can You Help Haiyan/Yolanda Survivors? (#thankful)

One way to be thankful is to help these people out:

"The Filipino Lawyers of Washington (FLOW), in association with the Filipino Community of Seattle (FCS), seeks your support in donating to the victims of Typhoon Haiyan/Yolanda.
The two charities that FLOW has chosen to support are: (1) World Vision, http://www.worldvision.org, and (2) Americares, http://www.americares.org. FLOW selected these two charities after researching and reviewing various charities, in response to the public’s concern of unfortunate corruption of some charitable organizations where donations aren’t being used to directly, efficiently, and effectively help the victims of Typhoon Haiyan/Yolanda. Please consider this when
making individual donations to charities other than those listed.
There are also a number of fundraising activities the FCS is either hosting or supporting. Please visit http://fcseattle.org for more information.
Please pray for the Philippines, and please consider taking action to assist the relief efforts. There is no effort that is insignificant.
Maraming salamat po! / Thank you very much!

Ten Things I Am Thankful For Right Now

This is not the most profound list, but it is mine. Why stress about making the best possible list? Just be thankful and move on.

What is Stateside Legal?

Stateside Legal is a website intended to help servicemembers, veterans and their family members and advocates with resources such as


Servicemembers, veterans, their families and friends who can't find the resources they need for a legal issue should check out resources such as their "Find Local Help" page. On the other hand, if you provide such services, you should check to see that you are on that page and, if not, contact the website to get added.

Why Do These Photos Of An LED Light Have Stripes?

At our Saturday eye exam, the eye doctor suggested using a stronger bulb in our reading lamps, to reduce eyestrain. Since we liked the result of putting an LED bulb in our Narnia lamp, we decided to get one for the reading lam; after all, it gets used almost every dayso it'd pay for itself eventually. Ieven had store credit at Home Depot, where they were available for about $7.
When I took the bulb out of the package, I noticed that it felt funny. Light bulbs normally have a rigid, hard and brittle feel, as a result of being thin glass. However this bulb was almost soft and slightly flexible - not visibly so, but to the fingers there was a tiny little fit of give. Upon contemplation, this appeared reasonable; there was no need for these bulbs to be gas-tight, so they did no have to be glass; a softer plastic actually made sense because it might resist damage were the bulb dropped. 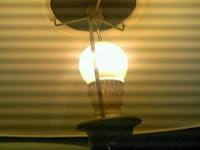 The bulb went into the socket as designed; it was funny to look around that room and see that we had almost nothing that really needed 110 current; everything had some sort of transformer built in to step the electricity down to something like 6 volts. Perhaps at some point we'll go to a 6 volt house, and use rechargables for anything portant the needs more ooomph - like the vacuum.
We liked the way the bulb worked. It was noticeably brighter than the bulb it replaced, and seemed to have a fuller spectrum of colors. However when I took a photo with which to illustrate this blog, I noticed a striped pattern. 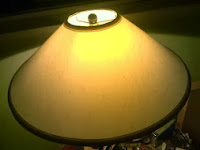 This pattern appears whenever I get a direct view of the bulb. When taking a picture of the bulb when it's lit, there is a strip pattern. Here are some examples. Any idea what causes that? 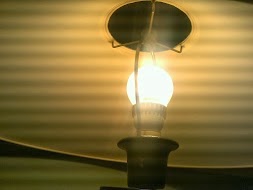 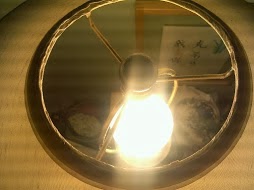 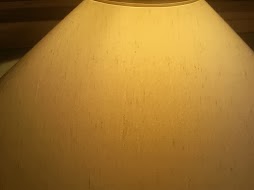 Email ThisBlogThis!Share to TwitterShare to FacebookShare to Pinterest
Labels: Green, Things That Make You Go Huh