There was no class at the Y this morning, so I got right to the business of goofing off! 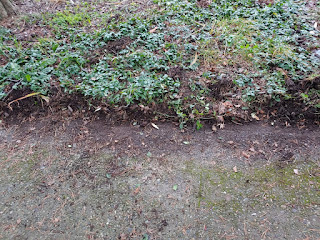 I do a little yardwork every weekend. This time I trimmed back even more of the periwinkle that is overgrowing the sidewalk. I thought I'd done a bunch earlier this month, but I'd missed a lot. 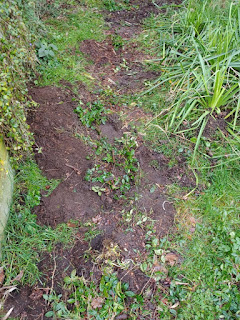 My trimming involves uprooting a clod near the sidewalk, and then replanting someplace useful. This batch is filling in the worn patch from my drive to my front door. The periwinkle should be tougher than the grass, especially if it has several months to settle in (due to Heather's extra car still being in the drive.) 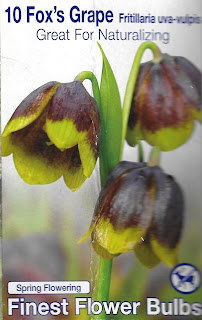 I also planted some bulbs.

I'm also having a good time experimenting with different fitness videos. Having the big TV in the living room means I don't have to fuss with my cellphone or tablet. The cats are entertained as well!
My big plan for the day had included driving a bunch of donates to St Vinnys, the VA hospital, etc. However I don't have a carload so I'll wait til tomorrow. I didn't have a reason to drive today, although I did take a walk around the neighborhood and scored a whole bag of trash.
at 6:28 PM No comments:

Audience Testing: What A Spot!

YEARS AGO I was watching George Carlin at a Springfield Mass theater because my Exit 7 friend Mark had invited a lot of us to go see how a master worked.
In the 3rd quarter of the show, when Carlin had the audience thoroughly in his hands and had totally earned our attention, he stopped and said in a very straightforward way that he needed to test a new set of lines. He apologized in advance if they weren't funny but he wanted us to react any way we felt, so here we go.
Each joke was a description of an awkward situation followed by the punchline "What A Spot!". For example: "Imagine you come back to consciousness ... standing on an altar ... completely naked ... and peeing on the bishop ... What A Spot!"
Some of the lines drew laughs, and some of them didn't. Mostly, it was great to see the guy at work, practicing his craft and getting feedback from the audience.
The point of this story is this: How often do you think someone saying something outrageous on the internet is testing their material?
at 6:10 PM No comments: 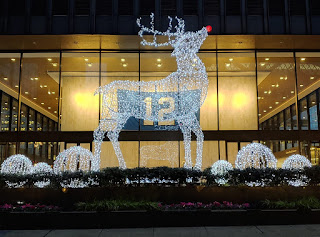 After work I had time to walk around and look for pictures (It's Friday - what's the rush?) after doing a little business (including depositing a check for $0.45 from a credit union that apparently recalculated my payoff amount.)
This photo is for the many Seahawks fans in my life. It's downtown of course. 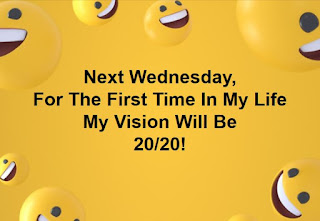 When I'm short of a picture to post, I compose a short quip. Today's was:
Next Wednesday,
For The First Time In My Life
My Vision Will Be
20/20!
This joke was well received on FB but a few hours later I wanted to edit it. Would it be shorter, punchier and funnier as
Next Week,
For The First Time In My Life
I Shall See
20/20!
I didn't change the FB post because it didn't seem right once people had started reacting. Maybe they didn't like the new joke and would want to rescind their "Like" or "Ha-Ha!". It's probably best to just leave the  imperfect up there and do better next time.

This holiday afternoon I walked around our neighborhood to see what I had not previously seen. 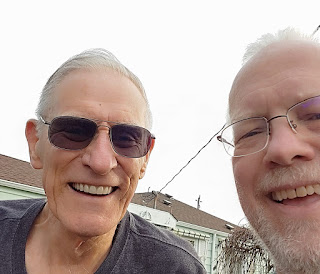 Darrell "The Stork" lives on the far corner of my block. He has great stories of stringing power lines when there were only 2 bucket trucks for 25 crews. He spent a lot of time going up on his spikes! Now he mostly gardens. He has 3 citrus trees producing (in Seattle!) - they're in pots that he takes them inside when it's cold. It makes you think! 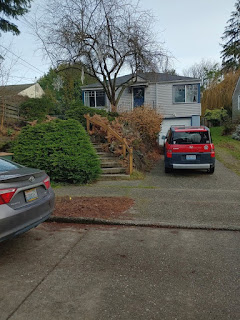 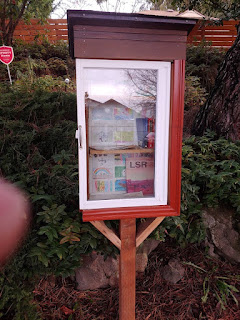 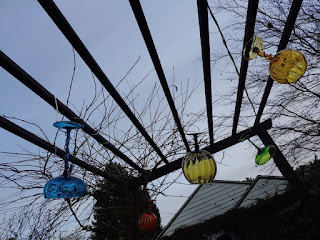 My neighbors Charles and Rick have a fun entry into their yard.
It says, "We like a party, and you have been warned!" 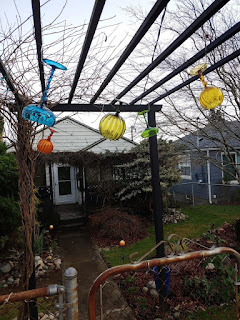 Pull back a bit for a wider look 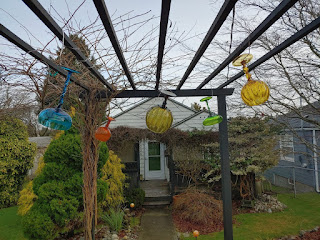 Can you tell that this structure fascinates me?
It is futuristic and primitive at the same time

My Good Luck In Saying Good Bye To Law Review


Fred Rodell, Yale Law School
Abstract
It is doubtless of no concern to anyone that this is probably my last law review article. As a matter of fact, this makes one more article than I had originally planned to write. It was something in the nature of a New Year's resolution. Yet the request to do a piece about law reviews seemed a golden opportunity to make my future absence from the "Leading Articles, Authors" lists a bit more pointed than would the business of merely sitting in a comer, sucking my thumb, and muttering Boo. Keeping well in line with two traditions—a course which lawyers will readily understand—I decided to break the resolution and not wait for opportunity's second knock. This, then, is by way of explaining why I do not care to contribute further to the qualitatively moribund while quantitatively mushroom-like literature of the law.
There are two things wrong with almost all legal writing. One is its style. The other is its content. That, I think, about covers the ground. And though it is in the law reviews that the most highly regarded legal literature—and I by no means except those fancy rationalizations of legal action called judicial opinions—is regularly embalmed, it is in the law reviews that a pennyworth of content is most frequently concealed beneath a pound of so-called style. The average law review writer is peculiarly able to say nothing with an air of great importance. When I Used to read law reviews, I used constantly to be reminded of an elephant trying to swat a fly." 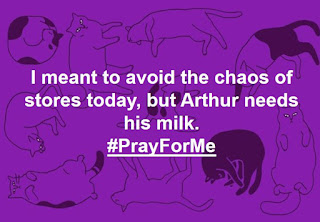 I know, milk is not necessarily good for cats, but Arthur is elderly and underweight so I figure give him what he wants. I was running out so I decided to brave the crowds at Target.
Well, there were crowds all right. Huge crowds.
However, I was not in a hurry so it did not bother me. I had my groceries and some extra, and I didn't have to leave town until about 4 pm so hanging out and people watching was o.k.
I posted this little joke on Facebook and got a bunch of "likes" so I guess I shared an experience that many people had sympathy with!
===
We had the usual fun party at Kat's for Xmas eve. There was plenty of food, although Sharon could not make it which is unusual. Everyone who could attend seemed to be doing as well as could be expected, plus or minus the vicissitudes of life.

Debunking a Meme about Scalia and Evolution

Late in the evening, my chores all done, I noodled around Facebook and found this on a Creation vs Evolution Public group: 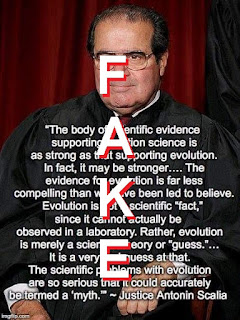 Now Scalia was many things (chiefly a royalist who used "Originalism" when it suited and ignored it when it didn't) but he was not a dummy. (Others have said that he didn't really understand science, but who knows?)
It seems to me that the key to this meme is that the quote has no citation. Was it for real and what was the context?
Those words are from the "Edwards v Aguillard" case (Louisiana's 1990s attempt to mandate teaching Creationism.) In this quote, Scalia was summarizing what someone else believed. That's something judges do all the time without asserting what they themselves believed. When a judge says  "The defendant said he didn't do it" it doesn't mean the judge believes  "he didn't do it".

That's right: Scalia DID NOT SAY HE BELIEVED what is in that meme. He was just summarizing the argument of the losing side so he could explain his position (which was roughly that if the belief was sincere then it didn't matter if it was nonsense).

The big lesson in this s to be wary of unsourced quotes; you're likely to be repeating something false.
The small lesson in this is that if you want to debunk a quote, go to the source.
at 10:00 PM No comments: 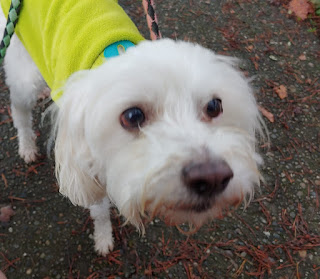 Today, like every day, my elderly neighbor Patty walked by, exercising this boy and other dogs that came to her from a shelter. She used to have 5, but the 3 oldest have passed away. I don't know whether she will get more, but she is devoted to the 2 that remain.
I was outside, doing yardwork. There is constant work to be done, cleaning up the fallen leaves or transplanting yet another batches of periwinkle to replace grass. When I went inside, I finished catching up with the complete run of the highly amusing Grrlpower webcomic. Seriously, I see no need to waste my time with the tired Marvel and DC lines when webcomics have a much fresher approach to story - and a much more competitive environment.
I gave away more of the food from the Friday distribution, but there's still some to go. I think I'll be able to move the rest on Xmas.