Thank our brave patriots in the JAG Corps

In an old book of military ethics, I recently read a chapter on a common problem. An officer who would not hesitate to risk or even give his life for our great nation in battle, may still feel qualms about risking his career by doing the right thing in an office setting.

Why this is, I can't quite say, but it's a very human problem. When General Shinseki told the Bush/Cheney/Rummy team that they needed more troops to secure Iraq, he was fired; the next man in line learned the lesson and obeyed. It happens.

It is all the more heroic, therefore, that our JAG officers (such as the gentleman seen to the right here) upheld the honor of our nation, as well as their duty under law, by giving zealous defense to the most hated prisoners of our lifetime, those at Gitmo.

Their careers are basically toast; what can we do as citizens? Common Cause suggests:

"The issue of torture and "enhanced interrogation tactics" has been all over the news recently. But no one is saying much about the brave members of the Judge Advocate General's Corps (JAGs) who refused to carry out orders to torture detainees at Guantanamo and other prisons, and who spoke out in defense of basic human rights.

Why not? Take a minute, show your thanks!
at 11:01 AM No comments: Links to this post

...my blogbuddy over at Reduce Footprints posted a great little article on how she wanted to get Fair Trade Certified organic bananas, but didn't see them at her grocer's. 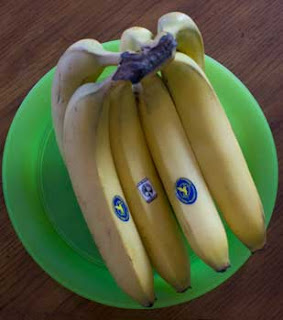 And when the produce guy said they didn't have them, she mentioned she'd like them.

She kept it up for a while and voila' - eventually the store tried stocking them!

In my experience, grocers want to know what their customers want. If you ask, they just might order some and see how it sells. So don't be shy - ask! And if and when the stuff comes in: buy it and thank the staff!. They took a chance on you, now repay them with your business.

I think you'll enjoy the whole story: "Banana fanna fo fanna ...". It's a good example of making a difference AND getting what you want, just by trying!
at 9:15 PM 1 comment: Links to this post

Our Blue Water Navy veterans of Vietnam need our help in getting help with their Agent Orange Injuries, as I wrote elsewhere at in Agent Orange Equity Act of 2009 (HR 2254, 111th Congress)
A network is rapidly forming, of citizens calling Congress to politely (please!) ask our Congresscritters whether they back the bill and, if not, why not. If we get enough people asking, they will act; imagine having to explain to your constituents that you oppose this!
The network, hosted by Facebook, is called Support Passage of Agent Orange Equity Act 2009 - H.R.2254. I hope you will consider joining us (and whether or not you do, call Congress now ... what reason can you have to delay?)
Together, we can get this done. The technology makes it easier, but we need to make the call and then tell our friends.
at 3:25 PM 1 comment: Links to this post

"All Nature seems at work. Slugs leave their lair -
The bees are stirring - birds are on the wing -
And Winter slumbering in the open air,
Wears on his smiling face a dream of Spring!
And I the while, the sole unbusy thing,
Nor honey make, nor pair, nor build, nor sing.

Yet well I ken the banks where amaranths blow,
Have traced the fount whence streams of nectar flow.
Bloom, O ye amaranths! bloom for whom ye may,
For me ye bloom not! Glide, rich streams, away!
With lips unbrightened, wreathless brow, I stroll:
And would you learn the spells that drowse my soul?

Work without Hope draws nectar in a sieve,
And Hope without an object cannot live."

The above seems a little overwrought, but who hasn't felt that way from time to time? If you don't have hope, everything sucks and it's hard to get started.
Coleridge doesn't describe what he feels hopeless about; maybe he's suffering form a dread and terminal disease, or maybe he's just having the teenage angst that seems mildly comical once it's passed (which makes it no less painful while being experienced. But still: comical.) Or maybe, he's just doing the hard work of writing a nicely contructed poem about the hopelessness that makes it hard to do work. The contradiction is cute!
Whether Coleridge was being petty and whiney, or cosmic and insightful, the larger point (whether he intended it or not) reminds me of Viktor Frankl's great book "Man's Search For Meaning", in which the psychiatrist and concentration-camp survivor describes how, in his hellish experience, those without hope that their lives have meaning soon perished while those in a physically similar situation, but with hope that there's some meaning to what's going on, survive.
Fortunately, most of us are a lot better off than prisoner Frankl and sad Coleridge. We can draw upon their widsom by seeking a good start to each day: think about what you hope for, what gives the moment meaning. Start small, such as a kiss from your lovely wife and a cup of coffee. In my experience, once you hope for something relatively attainable, it gets your energy flowing so you can work up to bigger things: brekfast, a neat desk, something to write about, another leaf in the garden and so on ... up to world peace and a good joke.
We don't have to solve all our problems all at once, but we do need to have a little hope and a little meaning. I wonder if Coleridge and Frankl found hope and meaningfulness in their writing about the problem?
at 9:13 AM No comments: Links to this post