The Christian God has, in two thousand years, persuaded less than half of the planet that he is the One True God.

Frankly, Coca-Cola has a better record of market growth in a short time. The Christian God cannot be said to have made His Case clearly since it is, on the evidence, not terribly persuasive. Indeed, it's not even the most rapidly growing religion today.

Thus if, upon my demise, I were to be confronted by the Christian God demanding why I did not prostrate myself before Him, I must in honesty reply just as I would to the God of the Zoroastrians: "Sir, you failed to provide the proof that would persuade a reasonable man, and as evidence I offer the fact that most reasonable men have not been persuaded."

The True God is not unreasonable.
at 10:49 PM 7 comments: Links to this post

Men make fun of each other. A lot!

This seems irrational. Why go out of your way to irritate other people? When you're discussing something important, why introduce humor and little mock attacks?
It doesn't help to say, "Because it's fun."  The question is, why is it fun? I'm not saying everyone enjoys it; to the contrary, sometimes the butt of the joke finds it very unpleasant and sometimes the smart nerd with all the facts loses out to the jock who has the completely wrong answer, just because the nerd can't handle mockery. It is important to figure out: what's going on here?


Maybe you're thinking, "Hey, why are you talking about men? What about women?" Simple fact: I am a man. I don't know whether women do the same thing among themselves; but from the outside, it seems that they have their own system. Ladies: feel free to chime in!

This was all a total mystery to me for about 50 years. I was kinda of a science nerd or something when I was young. I am really good at taking multiple-choice tests, and I read a lot of science fiction in which smart kids just like me saved the world and got the girl, plus the respect of the Ben Grimms

of the world. Being young and stupid, I figured that this was reality; I and my kind would dominate the herd and run the world by virtue of our enormous intellects!

Man, what a surprise reality turned out to be!

It's taken about half a century, but I think I have it worked out. Male mockery is a game about figuring out who to trust. Trust is not related to intellectual prowess. When things are going well, it doesn't matter so much who you're working with but you really need to figure out who will have your back when things go to hell. The game is to probe a little bit to see if the guy folds under pressure, or takes a hit and come back harder. In a crisis, you can't use someone who collapses in a heap, even if he's the smartest guy in the room, and even if he gets 100% on multiple-choice exams.

The Test Of Mockery is about whether a guy who is mocked lets it get to him. Under pressure, does he laugh it off or, even better, mock you back? You need friends and allies who have "Grace Under Fire". Brains you can hire; a guy who laughs when he gets hit and bounces back to cover you cannot be bought.


I call this is the "Klingon Science Probe" theory of male mockery. According to the dreadful Star Trek: The Motion Picture, Klingons probe unexplained phenomenon by firing photon torpedoes at them. This is a most efficient way of determining whether it is a threat, and if occasionally you lose a starship, well Klingons don't mind: they died for science!

Human males mocking each other is the same thing, but gentler because we aren't actually Klingons. Everyone wants to go to Sto-vo-kar, but no one's in a hurry.

In reality, the procedure is even better and complicated. Because There Are Lines You Don't Cross, the mockery test includes determining whether mocker and mockee have Situational Awareness of where the mocker's head is today, what's a real threat, what is harmless, and so on. It's complex stuff, and it's important to know your ally can handle complex situations.

I'm not gonna say this is a fair test. Some people have communications issues; some people just never figure out what the test is. I am suggesting that, in my experience, this is a real test, and our choices are to beat the test or to fail. I like to beat tests!

I suffered a lot of discomfort from this system in my early life, but it now works well for me. I have guy friends with radically different views of the world from me; I know corporate lawyers and Tea Party Patriots. We mock each other and we get along. When we have a problem, we help each other out, and then we mock each other more. This is not Vulcan logic, but it makes a lot of sense.

I'm not complaining, but my life would have been a lot easier if I'd learned this early in life. I hope this record of my experience helps at least one budding Starfleet science tech to live long and prosper.

And ... to have a certain amount of fun mocking and being mocked!
at 11:12 AM 1 comment: Links to this post 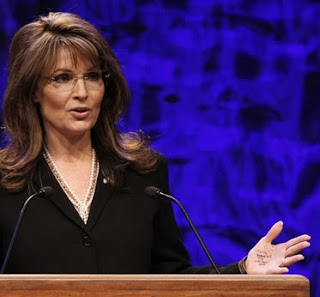 Former governor Sarah Palin demonstrated her innovative "TelePalmer" during her $100,000 speech at the Tea Party Convention.
Words such as "tax cuts," and "lift American spirits" were clearly visible written on her hand in an AP photo of the speech.

The genius part of her "TelePalmer" is that she did not use it to get through her speech. She's had plenty of time to practice that.

What she needed a middle-school cheat sheet for was the Q-and-A following the speech, where she was caught on video referring to her hand-written notes to answer a hard question. Here's the video - in seconds 47 through 49 the interviewer gives her an easy question ("What are the 3 most important things to do?") and when that stumps her, she just stops, looks at the notes written on her hand, and then gives an answer based on what she'd written there ("energy"). You won't believe it until you see it, and then you won't stop laughing:

As pundit Stephen Sirucek put it:

A) That she knew the questions beforehand and the whole thing was a farce. (Likely.)

B) That she still couldn't answer the previously agreed-upon questions without a little extra help.

If true, this is supremely rich coming immediately after a speech in which Palin took a shot at President Obama for using a teleprompter to read his prepared speeches.

You can bet that the President wasn't reading scribbles off his extremities while he sparred with Republicans and Democrats in an unscripted format in his recent Q&As.

Palin, on the other hand, seems to need a cheat-sheet just to get through a contrived lovefest with a smitten interviewer and an adoring audience.

I'm no fan of the Tea Party movement - if it can be called such - but if this is their leader I actually sympathize with them."

Actually, I have a much simpler explanation.


But first, a digression:

I know a lot of  garden-variety, all-American working-class conservatives who are pretty angry at getting shafted by our nation's leadership: jobs shipped overseas, land wars in Asia unrelated to America's safety, government spying on citizens without court supervision, our money supply being controlled by private interests who won't even let themselves be audited. And so on and so on; the list is long. These people (like the rest of us) have a right to be angry, but they are being used by the same-old crowd of corporatists and aristocrats, and wannabes like the Palins, who just mouth whatever focus-group-tested keywords sound best. If the aristocrats have to write their keywords on their palms to remember them, so what? Their contempt for ordinary Americans is so great that even when we see them reading notes scribbled on their hands, they figure it doesn't matter!

I mean, really. Couldn't Palin have been just a little more subtle? You're gonna betray us, o.k., but do you have to insult our intelligence too? 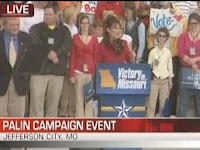 Now, the simple explanation: Palin condemns Obama all the time for using a teleprompter because she thinks a teleprompter user is not fit to be president.

Formerly, I had thought this was due to typical rightwing technophobia. However, TelePalmGate has brought to light numerous photos of Palin herself using a TelePrompter.

The obvious answer is that, from some deep down well inside her, she is telling America that she is not fit to be president.

Let us praise her for her honesty, and accept her self-evaluation!
at 3:33 PM 2 comments: Links to this post