This week I learned that Father John Bowen, who taught at St. Edward's while I was there, died last year. Here's an obituary.
Fr. Bowen's nickname (at least among the students) was "Jay"; perhaps it was because of his first initial, but rumor had it that it was because he was like a bird: small, quiet, and given to putting his arms on his hips and rocking a little on his feet. It was a harmless eccentricity but boys seize on anything.
He was, in my experience, never abusive or overbearing, but always spoke kindly. This was not something that could be said of all of the staff there. I believe he was one of the more effective instructors, based on the fact that I remember some of the things he taught.
He will stand out in my mind as the guy who taught me to drive. This may have been an act of courage; teaching driving instruction to teenage boys had to have been a challenge. We had the use of a large sedan lent (I am pretty sure) from a local car dealer. I remember that he had told us that lane changes on the freeway were especially hazardous, so the first time I tried one, I resolved to make it as quickly as possible, to minimize the danger. This was a mistake; my hard-left-then-hard-right technique made the car rock and was generally speaking not a good idea, but he merely commented in a gentle way that it would be better to do it a little more gradually. This stuck with me - and is a good example of his technique.
He had a Volkswagen Bug which he offered to students who wanted to try a manual transmission. Of course I volunteered for this - it seemed like a good idea and I didn't understand why everyone didn't try it. Somehow I got the idea that for this one trip, I should drive down to a local burger joint and pick up stuff for my classmates. Fr. Bowen agreed; he said that going to a fast-food restaurant was indeed something that people did, and would be a good thing to practice. I collected money and orders from several classmates, and the drive went almost without incident. The drinks were set neatly on the floor in the back where they would be relatively secure. However, as I approached the entrance to St. Ed's I remembered the lesson to gear down while turning. I got into much too low a gear, and the car lurched abruptly and sharply turned, tipping the drinks over. There was nothing to do but park in the lot next to the pool and check the damages.There was quite a lot of drinks on the floor, which I noticed appeared to be watertight. The bell rang for the next class; I asked if I should stay to clean up, and Fr. Bowen said only that I should go to class and he would take care of it. He did too, and I never heard a word about the mess I'd made. He was that kind of guy.
When I think back on this man and the others who taught us, there is a kind of sadness because they were making a fairly pointless sacrifice that lead them, in some cases. to live lies. I'm thinking in particular of an incident in which one instructor disappeared abruptly and without advance notice; we were told that he was needed at another school and that's all we were told. Years later, I learned he'd gotten into quite a lot of trouble due to "compulsive pedophilia" and, among other things, defrocked; it seems quite likely that he had been shuffled back to a treatment center before being reassigned to a parish after being "cured". The staff, to a man, maintained the "needed elsewhere" fiction, which not only harmed themselves as promoting a lie, but also harmed the students, as it kept us in ignorance of a real problem.
This was symptomatic of the school's entire approach toward sexuality and emotional maturation - namely, to deny it. The school claims to have been skilled at turning out spiritually excellent students, but this doesn't seem likely given this rather glaring defect. At this late time in my life, it's pointless to speculate but I can't help feeling that some of the difficulties I have had in my early relationship were accentuated by the unhelpful lessons taught there about the wrongfulness of sexuality.
A few years ago, Fr. Bowen came to the Seattle area, and I enjoyed a meal with him, along with my wife and another seminarian. It was pleasant to chat and check in on where we all were in our lives, and we promised to keep in touch. We didn't. I'm not sure why; writing letters is easy but I really didn't know what I would say to him. There's really no point in asking him about events so long gone, particularly since he still appeared proud of his careers in priestly formation. There's no point in calling that into question; he's quite elderly and not in need of any advice from me! On the other hand, he could have written to me as well, so I guess it all balances out.
Fr. Bown died at the age of 87, which now-a-days seems a little young for someone who appeared in good health. From his obituary he seems to have lived the life he chose and enjoyed it, so I think we can be happy for him. Why not?
at 11:05 PM No comments: Links to this post

Litigating the Right to Peace: June 22 in Seattle!

War is an ancient custom of nations, just as once was slavery, letters of marque, genocide, the rights of kings and similar institutions that seemed inevitable. Campaigns for their abolition may take generations or centuries, but the best time to being is always now.
The right to peace is implied in very law that forbids aggressive war. This is written into the constitution of two nations - Costa Rica and Japan - and implied in the acceptance of the United Nations treaty by most others. However, this right won't enforce itself, and for that we need lawyers and others to step forward in our courts and elsewhere. Who has done this? When they have succeeded, how have they done so? What can we learn from their successes?
Who has heard that Costa Rican attorney Luis Roberto Zamora Bolaños sued his government for violating the Peace Clause in its Constitution: and won? It doesn't get much press in our country, so it is very helpful that Attorney Zamora is coming to Seattle to discuss

This event is free and open to the public; all are invited to the reception following. Attorneys should pre-register to ensure earning credit; others are encouraged to respond to the evite to help with the head-count.
Title:
Litigating the Right to Peace
When/Where:
June 22, 2013
7 PM - 9 PM
Seattle University School of Law
Room C-5
901 12th Ave
Seattle, WA.
Speaker:
Human Rights attorney Luis Roberto Zamora Bolaños.
By:
Washington State Bar Association World Peace Through Law Section
Credit:
Approved for 2 General Credits (WA ID )
More:
http://www.wsba.org/Events-Calendar/2013/June/Litigating-the-Right-to-Peace
at 6:46 AM No comments: Links to this post 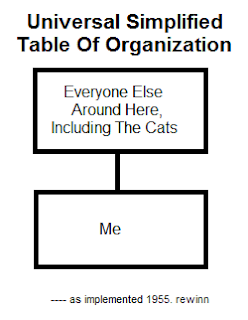 Ever wonder where you are in your family, at work, or in any particular organization?
You need a Table of Organzation! At a glance, you can see where you fit in, and this explains why things happen the way they do.
For your convenience, I'll include the Table for your particular organization. This Universal Table has always worked for me, and I'll bet it works for you!
at 10:28 AM No comments: Links to this post

During the week starting Monday May 27, 2013 (Memorial Day) I planted:


I may plant more stuff through the rest of the week. Who knows?
at 10:32 AM No comments: Links to this post

Memorial Day: Some Gave All, The Rest Of Us Can Give Blood

On Memorial Day this year, I went to the Puget Sound Blood Center and to give blood. They asked me to give platelets instead of whole blood so I said, sure, they're the experts, whatever they want. It took an hour or two while I played games on my cellphone, and there was cookies after.
Donating blood is not in the same category as serving our country in our forces, but it's something most of us can do so why not?
I wish I could say that I deliberately choose donating blood on this day as some sort of tribute to our veterans but the truth is that they called and I answered. It's not necessary to wait for the call; you can volunteer! Just contact the Puget Sound Blood Center if you're in my area; otherwise try the Red Cross Blood Donation Page.
Is this not a fitting tribute to those who served? And it gives you more reason to enjoy a big steak after!
at 9:18 PM No comments: Links to this post