Be A Science Volunteer!

Last week I participated in a couple of science experiments at UW.
Signing up for such experiment is simple: just google "Universityof Washington Healthy Volunteer" and soon be looking at a page of experiments look for volunteers with particular characteristics.
What participation means varies widely, but it must be descibed to you in great detail so you can validly consent to it. Friday I was involved with an experiment about color vision: there were a half-dozen tasks I performed, including liningup colored disks in a spectrum (photo shown). As a result of this experiment, I learned that my color vision is absolutely normal; there was also a small financial compensation as well.
Earlier this month, I was involved in an experiment studying the mechanism underlying Snow World, a virtual reality game for helping burn victims ignore pain.
I'd suggest everyone with a bit of curiosity check out the possiblity of being a healthy volunteer for science. It can be an interesting process and who knows? you get to contribute to an increase in knowledge!
at 11:23 PM No comments: Links to this post

There Was A Time In This Country ..." says Reverend Kiley ...

I was born into a poor working class Roman Catholic family, and while I have tried to get away from all that religion and working poor stuff, there is no way that I will deny my people. Luckily, this guy says what I want to say better than me:

Always Look On The Bright Side Of Life!

The good news is Monty Python seems to have an official YouTube Channel - and it features one of the best little songs ever:

Now, some may think this morbid - that's o.k. But I think it's thoughtful to put together a playlist for a funeral. I believe this would make a great sing-a-long at any funeral where I am the center of attention.

Go ahead - give a little whistle!
at 7:52 AM No comments: Links to this post

Email ThisBlogThis!Share to TwitterShare to FacebookShare to Pinterest
Labels: funeral

The Strangest Monday at MITS

Every Monday I stock books at the Mercer Island Youth and Family Services Thrift Store. Usually it takes a couple of hours to put out the donations and neaten up, and there's always a new story to tell: someone did something over the weekend, or a family member is visiting, or something. It's that community thing.
But today, Monday May 9, 2011, was the strangest Monday ever - most of the strangeness of a serious nature.
The lead volunteer in the book area is Charlotte - she's been doing the gig forever, but needs to take a couple of weeks off to move her and her husband to an assisted living facility in Bellevue. We talked today and I agreed that next Monday I'd help her & her boys load the truck. It's just what you do in a situation like that. It can't really make the situation good but it can make it less bad.
Then Don came in. Normally he's quite cheery and outgoing, and even today, he was cheerful for a normal person, but he had a most extraordinary story: his partner's mother found dead a guy to whom she'd been renting a room. It was very distressing for everyone involved, and there was still quite a bit of work to do at that house involving cleanup. There wasn't much I could do but offer sympathy; I don't think Hallmark makes a card that would really fit but still, you want to do something.
I was about to go (had all my shopping done and the car loaded) when the Once Sold Tales truck arrived. This seemed unusual, since we're accumulating books for the big book sale next weekend, but the driver assured me he'd been told to come and pick up some boxes. I wanted to consult with a manager (...since I absolutely do not do anything related to handling money; I'm a volunteer book guy, not a money guy ...) but we were short-staffed due to Don's emergency. The junior manager running things seemed curiously distracted, and happy to let me just pick which boxes would go - I figure the ones that were marked "X" would be o.k. to go.
At some point, I don't quite recall when, I saw a woman with a couple of rolled-up rugs walking in the parking lot, obviously having exited the store. One of the staff called to her, and she started explaining that she was just going to lay them outdoors to look at the color. This sounded kind of crazy (...although all sorts of crazy things do happen...) because there isn't any place in the parking lot to do that; maybe one might be able to roll open a rug on the walk next to the door, but the parking lot would be a terrible place to try to lay out a rug. Besides, you shouldn't take anything out of the store except with careful approval from a manager (e.g. sometimes people will test out a bike, with permission).
Eventually the police showed up, and it finally sunk into my thick head that this was a much more serious matter than my book thing (...I hope I may be forgiven for being book-oriented, but I really should have figured this out sooner.) Eventually the boxes of books that were unsuitable for the booksale got loaded to OST, and the driven went in to see about writing a check, and it was time for me to go. The police, the likely shoplifter and Susan that store boss (who had just arrived presumably from home) were more than enough people for the situation.
One more thing happened. Last Saturday, someone had donated a half-dozen Korean/English instructional books. I set them in the book carts for casual browser - it didn't seem likely they'd sell but you never know. Today (Monday) a lady came and asked about them; she'd donated a small dictionary that had been her mother's. It didn't have any commercial value (language books sell very slowly!) and, anyway, typically, we let people undonate items so long as we're sure that's what's going on, and it didn't seem likely anyone would know about this particular donation except the donator herself. However, I couldn't find that book! I found several other Koren books, which she confirmed as the missing books, but the little dictionary I couldn't find. She left before I could invite her to leave a phone number in care it turned up - for I was sure that I'd seen just what she was talking about, but due to its small size, it was probably in some backwash of mass market paperbacks. And, sure enough, that very book surfaced - in a pile of books from Saturday that I hadn't stocked, because they were an extra challenge at the end of the day.  Susan, the store boss, confirmed that in this situation, we'd give the book back, but now the problem was: how to I get this back to her when I don't even know her name? I looked in several of her books until I saw a named writen inslie. I looked up that name on the internet, and sure enough, there was one on Mercer Island! I left a voicemeail message, and was rewarded with a callback. Soon the book was back in the hands of its original owner's daughter, which was a moment of positiveness in a very strange day
at 10:37 PM No comments: Links to this post

http://influenceexplorer.com uses disclosure data to identify the largest donors to all federal and state politicians, PACs and political parties and the biggest spenders on Washington lobbyists.
If you can’t find the organization or individual you’re looking for here, try searchingTransparencyData.com.
at 8:14 PM No comments: Links to this post

The big planting news this week is that I moved the half-casks that Scott & Dolores gave us (they were going to discard them, since they needed to keep their new yard very easy to maintain) to the southeast edge of our paved area. This is the driveway extension that I suppose was supposed to hold our RV, but since we aren't going to have an RV, it makes more sense to convert it to growing space. I'd been using small pots along that line for growing lettuce and suchlike, but these casks fit in very nicely, and are as attractive as they are practical. On of them already has a very lively rhubarb, and two have mixtures of primroses and strawberries; the other two I'll probably put tomatoes in. These were very heavy to move but well worth the effort!
Earlier this week I planted some eggplant and kale in the pots that sat where the casks now are; I'll have to find another place for them now - which is a delightful problem to have! I'm also continuing to plant mint along the edge of the parking strip. I'd be happy to have the mint completely take it over, plus or minus some flowers and bulbs, but I want to move slowly so as not to shock the hawthornes. Sometime our trees are inconvenient but on the whole I think they are great contributors to our happy home, so I want to keep them comfortable.
One other plant note: the rhododendron that Scott had to get rid of sat in our blue trash container for almost a week; I kept its rootball moist and covered with a little dirt. Buffalo from the Nature Consortium was going to pick it up, but he wasn't sure when his truck would be available. Today, when I went outside after the Mother's Day Mimosas, I noticed the rhody was gone. Maybe he came by while we were at Pilates, or maybe while we were drinking ... or maybe the rhody ran off on its own; either way, it's going someplace where it'll be valued!
at 11:02 PM No comments: Links to this post

I'm not a terribly dutiful son but I try. So thanks mom! 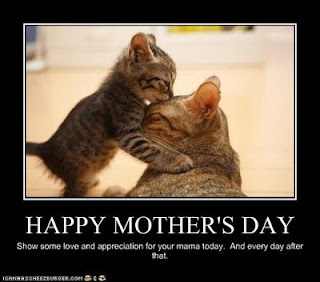 Cheezburger is always reliable for stuff like this
http://icanhascheezburger.com/2011/05/06/funny-pictures-mothers-day-cats/
at 9:51 AM No comments: Links to this post