Armoring for Camelot at Exit 7 Players

One of my fondest memories of community theater was doing Camelot, with Exit 7 Players, back in 1985.

Camelot was Exit 7's first musical and first really big show. And WHAT a big show! Our director, Howard, was an ambitious man. He wanted spectacle, he wanted drama, he wanted horses at the knighting scene!

We tried to match his frankly manic vision. Sometimes what we tried worked, sometimes it didn't, but it was huge fun going at it!

If memory serves, the producer was Pam Hebert, a no-nonsense leader who was actually very friendly but also very goal-oriented. My then-wife, Sherri Cole, worked with Pam's husband and I'm sure that's how we made the connection. Sherry & I were very active in the local Society for Creative Anachronism group (the Barony of Bergental), so naturally we were called in to help out with costuming and whatnot. Many Bergentalers lent costumes and banners, and filled in as extras.

I particularly enjoyed making the armor for the show. My personal SCA armor was rusty and clanky, and with the addition of someone else's mail shirt, provided Dick Hamel with a wonderfully decrepit - and noisy - King Pellinore outfit. Everyone else in armor got kydex (plastic), most of which was made at an armoring party featuring myself, Dick, his young son and my brother Eric.


I'd gotten a lot of kydex scrap cheap from some plastic forming company near Springfield. We cut out shapes my Craftsman skilsaw, softened it by warming it in an oven and then curved to fit by pressing it to the body of my brother Eric. Eric was a pretty good sport about the process, although it may have been that he was unwilling to admit that the stuff was hot! It swiftly cooled and we spraypainted it to look shiney-metallic.

When we had all the stuff made, there was some leftover kydex. And there was Dick's son. So we quickly made up a boy-sized set, just for him. Needless to say, he was very happy.

We had only one disaster in this process. The excessively elaborate armor that I'd designed featuring small sliding pieces to cover the gap between the elbow cup and the upper and lower arm protectors (in retrospect, far more than the show really needed but what the heck.) The larger pieces had to be done in the kitchen oven, the small slidy pieces fit neatly in the basement toaster oven (see it coming?)

About 20 minutes after we'd finished the project and we sitting around the kitchen, a smell came up from the basement, then a little smoke. I'd left one extra lame in the toaster oven! I ran downstairs and, through the haze, saw it'd swollen up like an overgrilled hot dog and was spewing God-knows-what like a cheap monster movie hatchling. I held my breath and threw the toaster oven out the basement window, into a side yard where we never went anyway. We'd created our own miniature Superfund site!

Camelot gave me many memories and many good times, but I'll always treasure its most important lesson: Turn Off The Oven!
at 11:41 AM 2 comments: Links to this post

If Fire Departments Were Run by Health Insurers

Imagine how efficiently private health insurers would operate fire protection!
When you detect a fire, call for help and follow this checklist: 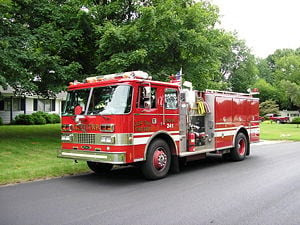 However:
at 3:02 PM No comments: Links to this post

It's time to rethink how we bridge the gap between average americans and civil justice.

With the best will in the world, great genersity on the part of many people in the legal profession, and the investment of a lot of money, that gap has never been fully bridged. For example, in Washington State, it has been estimated for years that we need on the order of $25 million in funding to bridge the gap, yet funding has never reached half that. And in the current economic downturn, the gap grows larger while the resources shrink.

In business terms, our business model is not working well enough. This means that now is a good time to reconsider our project design. If what we are doing didn't solve the problem when our economy was flush with cash, it's not going to do so any time soon and, most likely, never can.

Therefore, we must change our business model. Our purpose is to close the justice gap.

What is the "Justice Gap"

The world is full of disputes. People have disagreements over land, rent, contracts, injuries and anything else you can think of. Our legal system tries to give people a place to work them out peacefully instead of a worse way.

Ideally, all legal disputes would be solved on the merits; each side would present their facts and match them to the law and the result would be fair (...although not necessarily to anyone's liking.) However, in practice, there is a big advantage in knowing how the rules work or even what they are. It's like any game; if you've never played before, you have a hard time winning if you're reading the rule book at the end of the round.

That's where lawyers and other legal professionals come in; their job is to know the rules and help everyone else work things out according to the rules. However, a great many people cannot afford legal professionals to help them, and as a result, their disputes may be resolved on a basis other than the merits.

The difference between the need of people for help in resolving their disputes under law and the resources available to do so. This is the Justice Gap.

Typically, the Justice Gap refers to civil matters, not criminal, since there is a constitutional requirement for legal help to criminal defendants. Whether that's adequate is another question.

Summary: With the best will in the world, our current solutions to the justice gap cannot solve the problem.
This does not mean we should not continue with those efforts, and it definitely does not mean we should give up, but it does mean we need to look at some new ways of doing things.
Next Step
at 1:11 PM No comments: Links to this post

Shower With Your Garden!

Engaging the plug in the tub to retain the water from a shower does two useful things:
Greywater is water that has been used, as in a shower or in washing dishes, so that it is no longer drinkable, but is not icky so it can be used in gardening. The little bit of soap and exfoliated skin flakes in the water doesn't really bother the plants; scooping the greywater out of the tub to pour on thirsty tomatoes, sunflowers, herbs and so on keeps them healthy and growing just as well as water from the tap or the hose would.

In an ideal system, our entire building's greywater from all its apartments would be collected and reused systematically. Someday, all new buildings will have this feature but for now, showering with my garden is a practical first step.

P.S. it very slightly reduces my water bills. Going green can mean saving green as well!
at 9:11 PM 2 comments: Links to this post

For What It's Worth: "The Uprising" by David Sirota

"There's something happening here,
What it is, ain't exactly clear ...
Stop, children, what's that sound?
Everybody look what's going down..."

---Stephen Stills, "For What It's Worth"

For a fast ride through the world of today's American populism, you can't beat David Sirota's 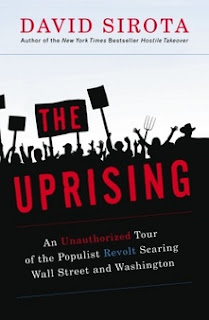 "The Uprising: An Unauthorized Tour of the Populist Revolt Scaring Wall Street and Washington".
Some have faulted this book for not being a well-organized technical manual for political action, nor an encyclopedic and boring analysis of a political movement. That misses the point; this book is not a Grand Theory of Everything, but a bunch of observations making a point based on facts, not theory:

The vast majority of ordinary Americans are mad as hell at the collapse of our freedom and economy, and doesn't wanna take it anymore, and does not have a single realistic hope of making a difference.

So, as Sirota documents, we too often turn to unrealistic hopes, usually consisting of finding a Leader to identify for us an Enemy at which to make ineffectual gestures. This keeps everybody happy: rightwingers and leftwingers can attack each other, and those who profit from the collapse of our American freedoms and economy go on their merry way.

Sirota's fact-based analysis suggests a solution, but it's painful. We need some sort of Multi-Step program starting with accepting that we've screwed up in the implementation of our deepest, most sincerely-held political beliefs. Our fun and angry finger-waving has NEVER worked; there is no substitute for the sober work of organizing and pushing through reforms such as Fusion Voting.

The people on which Sirota reports may be stuck in stage of Denial and Anger; they his lack of reverence for their hobbyhorses must be maddening. On Amazon, a leader of Minuteman group he visited wrote a hugely angry review, but I wouldd think the people who should really be p.o.'d are the members of the Permanent Protest Party (the stilt-walkers, puppeteers, tie-dyed T-shirt vendors and whatnot that clutter every protest and have had no success since the Civil Rights Movement ... in whose parades, Sirota is too polite to observe, there were no puppets or stilt-walkers.) This book may have been run through the shredder at MoveOn.org as well.

But, just as a true friend tells you the truth you don't want to hear, Sirota tells his friends (and others) stuff we really need to know. His succinct deconstruction of the futility of mass demonstrations in TV-dominated America rings very true; the largest antiwar demonstrations in history didn't even slow down the 2003 invasion of Iraq, whereas the relentless organizing and personal networking of some recent political campaigns have succeeded. (It is striking that this book came out *before* the Obama campaign won by reaching out to every community; not winning every community but making a sincere try. Take the lesson!)

The task before us is large; the road is not clear but the first steps are obvious: Enjoy this book, then go talk to a wingnut. We have something in common!
For What It's Worth:

"There's something happening here
What it is ain't exactly clear
There's a man with a gun over there
Telling me I got to beware
I think it's time we stop, children, what's that sound
Everybody look what's going down

I think it's time we stop, hey, what's that sound
Everybody look what's going down

What a field-day for the heat
A thousand people in the street
Singing songs and carrying signs
Mostly say, hooray for our side

It's time we stop, hey, what's that sound
Everybody look what's going down

Paranoia strikes deep
Into your life it will creep
It starts when you're always afraid
You step out of line, the man come and take you away