Much as I enjoy criticizing large corporations (...and much as they deserve it...) all the same I must point and praise when one does the right thing.
Home Deport gave us a store credit for a lawn mower they sold us that died after 14 months! We were proud and happy to get a cordless electric, figuring that electric was much more environmentally responsible and that electric motors are even simply than gas. However, a couple of months ago, its battery stopped charging. It was effectively a $250 piece of junk!
I called in the problem, and after a while (...and, from the sound of it, an electronic transfer to a foreign nation. Paying AMERICANS to answer the phone must be too expensive; after all, we have to be able to afford buying lawnmowers!) I was directed to take the mower to an authorized repair center. This didn't make a lot of sense; the battery was removable so common sense would say to just pop in a replacement. But I followed directions; mother-in-law took the mower to Repair. And Repair sat on it for a week or more. Finally, after a while, they announced that the battery didn't work; this is something we figured out a lot quicker, but then, we aren't in the business. Repair said a new battery installed was $165. "Installed?" I asked, "It's removable! you have to remove it to charge it. How can it possibly cost that much? $165 for the battery of a $249 mower?"
Still, that was the price. The batter was no longer under warranty; Repair told me the warranty was for 1 year, and it was now 14 months past. "I know what you did," he told me. "You're supposed to store it in a special way over the winter. It says so in the manual." I doubted that (and later examination proved me correct) but even if so, such important information should be printed on the cover in red, not hidden inside a 38-page text.
After the mower came back, our neighbors Scott and Dolores lent us the gas mower that had been sitting in their yard for a year. It turns out that it didn't really not work; it just needed to be started! I guess there's a lesson there ...
...meanwhile, a pushmower came in to MITS. I grabbed it; it's much nicer than the ones we had at kids.
Eventually, I stopped by Home Deport to pay my bill. I had no hope they'd take the mower back, but maybe they'd do something for me. The clerk soon decided that the situation was absurd; lawn mowers should last more than a year! She talked with a manager and decided to "RTV" it - Return To Vendor. Let the vendor eat the loss!
Of course, I had been so convinced that nothing would come of this, that I hadn't actually brought the mower. I agreed to come back in 2 days.
The mower fit neatly in my truck (although I had to shoo the cat out) and soon the exchange was effected. The clerk at first wanted to do a straight exchange of machines, but I was sure I didn't want another rechargeable - it would just die again. A corded electric would be o.k.; they're pretty simple. But there was a problem I hadn't anticipated; I hadn't brought the receipt because I figured they had my bill in their computers. Unfortunately, the store could access records from only a year back, so the mower had dropped off. That meant they needed to go with store credit, which, frankly, is better now that I have the push mower.
There was some question as to the amount of credit; since I didn't have the receipt, no-one had direct knowledge of what I'd paid. One clerk pointed at a mower that looked similar; only later did I note it was a corded machine, and therefore cheaper. By then it was a little late; they'd settled on a negotiating position of $199 and, frankly, I was happy to get that money back; after all, I had had a year's use of the machine.
I'm not sorry to see the cordless electric go; in the end, it was just another cheaply made gadget from China. But I'm extra not sorry that we got most of our money back - and I must salute Home Depot for doing the right thing. I really had not expected this!
at 11:39 PM No comments: Links to this post

Email ThisBlogThis!Share to TwitterShare to FacebookShare to Pinterest
Labels: home, Things That Make You Go Huh

This morning I drove to MITS and stocked books for a while; as usual our pass-ons to Once Sold Tales are stacked to the ceiling, making work difficult. But we persevere!
I left early for a noon meeting at WSBA for a Rountable on Military Families and Youth. It was quite interesting and I hope there will be a report for me to link to soon. I did some good networking, getting some good ideas and introducing a few people to each other who really needed to meet.
Since this was at WSBA, I drove Kris home (after a brief detour to Mercer Island - I was driving on autopilot LOL!) and, after a Marista meeting via gotomeeting and then a fine dinner of buffalo nachos, I started filling in the raised bed in the back. First there was a bit of cardboard from our recycling, to provide extra carbon, and a few dead branches, but mostly it was stuff from the compost heap, which has been turning to dirt nicely. I panted the one raspberry vine that had been still in a pot, and noticed out berries are beginning to fruit.
All-in-all a good day, but as usual, odd.
at 10:34 PM No comments: Links to this post

Kickstarter is a funding platform for creative projects. You make your pitch, and people put up money. If the project makes its goal, the money changes hands and the investors get their reward. If the project doesn't make its goal, no money goes anywhere. It's brilliant!

Email ThisBlogThis!Share to TwitterShare to FacebookShare to Pinterest
Labels: money, Things That Make You Go Huh

My Wheelchair is a Real Chair (Book Review) 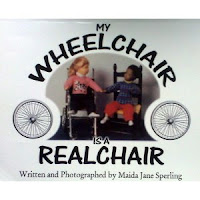 This book describes for children what it is like to live using a wheel chair, and how to interact with someone who does. It uses Dr. Seuss-like verse and large pictures of dolls, one of whom is using a wheelchair, to show and tell people performing everyday actions such as school, playing "dress-up" with a friend or going to the park.
Often the verses contain useful hints, such as to ask before pushing the chair. Other pages have little wheelchair-specific content, emphasizing instead that people in wheelchairs do more-or-less everything. The last few pages invite the reader to draw pictures of what they and their wheelchair-using friends can do together.
This appears to be a very useful book for children with a schoolmate, neighbor or other potential friend who can use some help figuring out what to do. It's direct but not heavyhanded, and for this it deserves top marks!
http://www.amazon.com/Wheelchair-Real-Chair-Maida-Sperling/dp/1401065058/ref=cm_aya_orig_subj
at 8:46 AM No comments: Links to this post

I'm learning stuff from this week's Change the World Wednesday Challenge is going to take some preparation to succeed with:

"This week refuse to buy anything which is, or which comes in, plastic. Instead, opt for Eco-friendly items and packaging ... or do without."

TSaturday I needed a few groceries: oatmeal, fruit, peanuts and something to drink. Most of these I could get in cardboard but the economy size of peanuts was in a plastic container.
I pondered. I reuse plastic peanut containers for many thing: holding staples for example. But sooner or later all my pantry shelves will be full and they'll be waste.
In the process of pondering, I saw a 2-for-1 sale on a smaller size of peanuts, which incidentally came in glass jars. With a coupon, this deal netted out slightly cheaper! So I went for it. One lesson: stopping to think can pay off! So the exercise of trying to go plastic free actually saved me a tiny bit of money because it took me out of my everyday path of thinking.
When I opened a jar to enjoy the peanutty goodness, it struck me: the lids are plastic! I don't know when I last saw a peanut jar with a metal lid. I basically failed to be 100% plastic-free, which is unfortunate but it's important not to be discouraged since this effort DID result in some improvement. In any exercise program, perfection is nice to aim at but the goal is to improve.
I'm not sure it's possible to get shelled peanuts without plastic around here; if I buy in bulk, they go into plastic bags. It may be necessary to accept a tradeoff: the plastic in a reusable bag is probably less than the plastic in a lid (...and buying in bulk is almost always cheaper than by the jar.) I believe that if I get organized, I can buy in bulk using leftover plastic bags from my last bulk buy, and store long-term in these glass jars, for zero net plastic use for the next transaction. This will involve an increased labor cost on my part, which can be offset by cost savings. This will never be enough to make me rich, but frankly, it's a fun game to work out in my head!
Let's see if I can make it to Wednesday with no more plastic, or at least, no more net plastic!
at 9:51 AM 3 comments: Links to this post