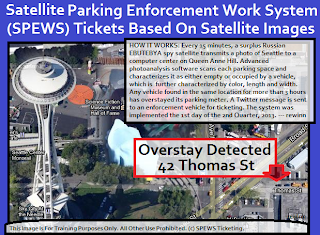 SEATTLE - Today Seattle Mayor Mike McGinn of Seattle announced the implementation of an advanced satellite-based system for detecting cars that have overstayed their parking meters.
The functioning of Satellite Parking Enforcement Work System Tickets (SPEWS-Tickets) is simple: every 15 minutes, a surplus Russian EBYUTEBYA spy satellite transmits a photo of the Seattle area to a computer center on Queen Anne Hill. Advanced photoanalysis software scans each parking space in the city and characterizes it as either empty or occupied by a vehicle further characterized by color, length and width. Any vehicle found in the same location for more than 3 hours has overstayed its parking meter, and an enforcement officer sent a Twitter message to go issue a ticket.
Critics complain the the system is vulnerable to error, especially in a city filled with small blue sedans and oversized black pickup trucks. If you leave you parking space on time and the next car in the space is close in size and color, the system may decide the 2nd car is a scofflaw. Supporters, however state that such a coincedence would be rare and, in any event, no ticket issues until an officer has manually checked the parking chit manually.
Southcenter Mall is considering a similar system, but with a different purpose. "We want to identify empty parking space so we can direct customers to them" said a spokesman, "At present, shoppers have to park as far away as Auburn or even Federal Way, and sometimes get lost walking to our mall. We aim to fix that."
A spokesman from the Mayor's office was not available for comment.
at 8:08 AM