For the first time for as long as I can recall, I awoke from a worried dream. I was on a bus going over the pass (which I knew was Snoqualmie Pass, coming home from Eastern Washington). The driver talked a lot while focussing on following the road which had no guard rail to stop us from plunging down the cliff of several hundred feet. I have never liked that stretch of road but it was worse not being in control.
I have been practicing social distancing, which means I'm alone with the cats and the internet. I still do some exercise every morning, but my energy is low so I often settle for some yoga. I like playing the exercise youtube through the day, for the sound of human voices, but the cats prefer their videos. I compromise.
Kiara came by to do some house cleaning. She trying working while in school but this interfered with her studies; I'd much rather she do some housecleaning that fits her schedule and excels at school I trust her around here to do a good job and not need direction. It was odd to maintain the necessary distance since she's kind of huggy but that's just the way it is right now. We're all doing our best to be smart.

Today Gaylen called and said IRS was granting 2 weeks of Administrative Leave related to coronavirus. He'll re-code the sick time I took earlier this week.
This means I have support (and income!) for self-isolating until after March 27. I will reassess then.
It feels selfish not to go to work but it would be selfish to do so, so either way I'm being faithful to my spiritual traditions.
---
I am spending this time cleaning, taking online classes. I took in a program about speaking online (specifically: winning speaking contests online, but the methodology fits any online speaking) and realized two things:
It's all very educational.
I also planted onions and the last of the chard seeds, and harvested more of the miner's lettuce for freezing (it'll be nice in soups in the fall). We must think ahead.
---
Late in the day I saw a post by my friend Jenn about mask donations to her ER, then a tweet by an MD asking for more. With a little research I saw some hospitals were reduced to asking the public to sew masks!
These would not be used alone for covid-19 patients, either as covers allowing the professionally built masks to be reused, or for less serious cases, such as people in the waiting room with a cough or who were just worried without a mask. CDC is allowing even scarves when there are no alternatives, so homemade masks are better than nothing.
I'm researching and posting about this, hoping to get some people interested in helping out, when Arthur announced it was bedtime - which it was. He warned me one or two more times, then went and expressed his cat rage by peeing on the bed.
I don't like it but I understand his annoyance. He's just not good with words.
at 11:00 AM No comments: Links to this post 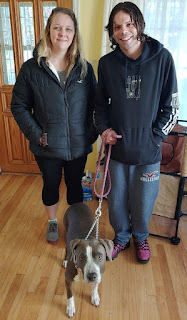 Shayla, Andy and Coco are now on their way to Arizona (actually I think Shayla will be staying with her mom here another week while Andy and Coco head south). It was nice having them here but it was only a temporary thing. Good luck to them!
It was nice to make more friends (who like to cook or make repairs around the hose) and it helped me realize I can use this home for more good; I just have to figure out how.
--
Today I called in again as part of the 15-day recommendation by my doctor (Dr. Ryan, as Dr. Wendy was out). I asked about the status of the Administrative Leave mentioned by the union.
Galen called back and said the message he'd gotten was that the union was mistaken; people can take sick leave and vacation time, and then could take LWP (Leave Without Pay).
Fortunately I have several weeks of vacation in stock, which I had planned to cash out to help with the transition to pre-tirement, but now is the time to use it, I guess.
Later, Galen called back and said they were looking into telework. I enthusiastically said I was interested.
--
I put in time on projects, but scheduled a walk for health which I used to go get some boxed milk. I don't really forsee food shortages but I don't want my cats to run low. While I was there, I got a can of sardines (plain, in water - no hot sauce) to see whether the cats will eat that.
------
Since I was at home, I was able to log into the WSBA/WPTL Executive Committee meeting on time and participate comfortably. However, when I think over the Toastmasters meeting yesterday and the upcoming Toastmasters and WPTL events, I believe I will need a wireless headset.
---
I moved the chickhouse up onto the cart, which left a rectangle of soil that I had hoped would be ready for planting. It still has some morning glory runners - those things are tough! - but I cleaned them up and dug the soil, ultimately planting the rest of the onions, the rest of the chard seeds, and the roots of the butter lettuce, with a little leaf attached to encourage regrowth, and a bit of transplanted miner's lettuce. Let's see how much grows!
I also harvested a bowl of miner's lettuce, all the dandelion blooms in the back yard (the front yard blooms I just cut off - I don't want to eat from that close to the road), and a little onion. They were a nice addition to my dinner burrito.