For the first half-century of my life, I've had pretty reasonable blood pressure. I've been pretty lucky with my health, and when I was donating blood on a regular basis, I was always told my BP was normal, usually around 110/80.

Recently, I got a physical, on the grounds that I hadn't had one for a long time. It went pretty well, but for two things. One thing was told was that I had prehypertension -  borderline high blood pressure that typically proceeds to full hypertension. The doctor recommended I up my aerobic exercise to 5 times a week of 30 minutes of elevated heart action, consider cutting back on salt and fat, and keep track of bp.

The other thing is that I had no idea how much this physical would cost. It cost a lot - and I still cannot be sure that I might not get another bill for another part of it.


If you take your car to a mechanic, you get a written estimate. If you buy a head of lettuce, you see a price attached. If you get a haircut, the rate is posted on the wall. In all these cases, you get one bill, even if several people work on you.

If you go to a doctor, you don't see any prices. No-one in the place knows anything about the price of their services; they won't give an estimate in writing; they won't give you an itemized bill. Apparently some of the work is done by one company and some of it by another, and no-one knows or cares about some sort of integrated up-front billing. To the employers of the doctors, techs and clerks, you are just a sack of blood and money, from with a little of the former will be extracted in order to get as much as possible of the latter.

The clinic I went to is still sending me bills. Now they are threatening to send me to a collection agency. Understand, these are not bills for services that I agree to buy at a price I was told before hand.

What happened was, I said that I wanted a normal physical. The staff said, fine. They didn't say how much it would cost. They did some stuff. Then, afterwards, they sent me a bill.

This is a scam. It may be legal, but it is basically like an auto shop working on your car and then saying, sorry, it's going to cost you a lot of money.

But the system is dishonest. You cannot make a rational economic choice if you do not know the price of services.


I am extremely reluctant to talk it the bp system with a doctor a second time. What will it cost me? Even the doctors does not know.

So what are my alternatives?


But where else can I go for advice on steps to reduce the problem, except to the same people who don't know what causes it? So I go back to the Mayo Clinic website for suggestions:
But I'm not really satisfied with the health system as I am experiencing it. If this were producing any other product, I'm sure it would be approaching failure.

But just when I'm getting all grumpy and tense about health, her come Billionaires for Wealthcare with a nice show tune to sing us out....

Email ThisBlogThis!Share to TwitterShare to FacebookShare to Pinterest
Labels: health

Global CATspiracy: are the Felines For CATastrophe?

DARING to ask the QUESTIONS that few have BEFORE, Project Savior reveals ...


"At first glance you would think the Evil Minions would be all for a Warmer Climate, as they like laying in the sun.... 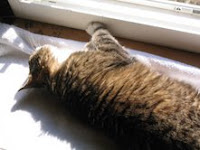 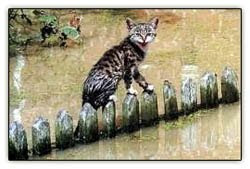 As the sea levels rise they will use anything they can get their paws on to use as a floatation device. ..."


LEARN THE TRUTH IF YOU DARE AT Catspiracy Purrsday
at 11:20 PM No comments: Links to this post

Here's a program at which I am presenting; I hope you'll find it interesting.

Calling all lawyers, paralegals, and law students interested in making a difference in your community! Join us October 30 for a day of pro bono workshops on:
OFFICIAL FLYER:
http://www.wsba.org/lawyers/groups/wyld/celebrateprobono10309flyer.pdf

WHO SHOULD ATTEND:
Lawyers, Paralegals, and Law Students
$125 FOR CLE- $25 HARDSHIP RATES AVAILABLE- RECEPTION IS FREE AND OPEN TO ALL
Register Now: http://www.regonline.com/builder/site/Default.aspx?eventid=776003
For questions, contact Roxanne Mennes, Director of CLE Programs, at mennesr@seattleu.edu.


My contributions to this program are small but, I hope, effective. Over lunch I will be part of a Pro Bono Fair, in my case showing off the Pro Bono FAQ and other features of the

ProtoType Bar Association, such as the simple search across multiple Washington State Legal Community websites. In addition, I am organizing and presenting a panel on using social media to facilitate recruiting, retention and rewarding volunteers in pro bono programs, based on my experience with AACF and with PTBA's twitter. I hope to get one person interested in each opportunity; not to precisely replicate the work, but at least a-fire with the possibilities and willing to move forward. It will be a test of the crowd: who among them signs on to the concept that we can end the justice gap?
at 7:02 PM No comments: Links to this post

This year's Seattle Urban Agriculture project has been a lot of fun, and I also learned quite a bit that made our private growing efforts more effective.

The plants are definitely slowing down as the days shorten. On the plus side, we don't have to water anymore, as the deluges of the last few days make excess moisture the concern, rather than the reverse. I guess we'll have to clear out some of the tomato foiliage to encourage evaporation, discouraging mold. The plants seem to be cooperating, by shutting down some stems. 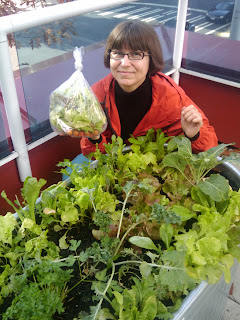 As long as we're not getting frost, we'd like to keep trying to pink up the tomatoes that are still green. Eventually we'll have to bring the greenies indoors still on some long pieces of stem, and try to finish them in a box on top of the clothes dryer.

The greens which were the 2nd crop in the Tower greens tub needed quite a bit of thinning, which produced some nice baby greens. At the Court, the greens had started spottier, not as thickly sewn I suppose, and grew into adulthood more quickly; we took a batch of adult greens from there. Some had aphids, which I tried to brush off, but I suppose we'll have to assume the recipients will rinse the greens before using.

The crops we've been getting may seem small, when expressed in pounds and ounces. however, in practical terms, the food bank has been able to give out the makings of several nice salads, all organic too! Our private patio pot garden has been keeping us in tomatoes for about a month, which is very welcome, especially considering the flavor and nutritional superiority of our product.

The benefits of these small gardens go beyond the culinary. Checking the health of the plants was a nice quiet activity in the evening; the morning watering was also a pleasant ritual (...not to mentioned delightful on the hot days!) While the primary purpose may be food, the recreational benefit should not be overlooked!
at 4:28 PM No comments: Links to this post