Our neighbors Marcia and Wendy are getting married. This is cool in many ways (they are obviously a loving couple to each other, and excellent neighbors to all of us) but it raised a problem.

We wanted to get them a card. We're not close enough to them to be invited to the festivities, but marriage is a big deal that needs to be celebrated by the community with an appropriate small gesture. So The Lovely Wife and I decided to walk to the nearest store and checked the card selection.

There was half an aisle of wedding cards, but each was more heterosexual than the next. Now, I'm very o.k. with straightness, having been that way all my life and finding it a great asset in my marriage, but the uniform gender assumptions of every card present got in the way of solving the current problem. What to do?


We just wanted a card that said something like "Congratulations! Happiness always!" and couldn't find it. Every one felt the need to specify the genders of the parties! The card with the vaguest text featured a tux and a white dress which, technically speaking, might not have been gender-oriented, but it would not have fooled anyone.

Feeling frustrated, we did the only thing that made send: go to the funny-card aisle and have a few laughs. This is always a good idea, no matter what your mission. 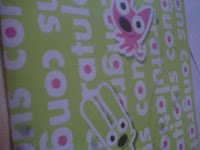 This was better than all the formal cards lined up in a row and taped together! It made us laugh.  It said what we wanted. It said nothing more. (It might also say that we can be a bit silly, but what-the-heck, that's just the truth!)

So, to Marcia and Wendy: Congratulations on your marriage. May it be long and happy!

And to the makers of greeting cards: you're missing a market!
at 10:03 PM No comments: Links to this post

Iraq Disaster Coming to a Close 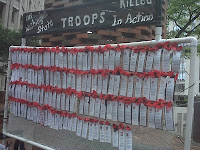 America's greatest self-inflicted wound since the Civil War officially came to an end today, with the announcement of the end of Operation Iraqi Freedom.
Every one of the over 4,400 America lives lost as a result of the lies told to Congress and to the American public is a case of felony-murder (it being a felony to lie to Congress) for which no-one will be brought to justice in this life; and George W Bush, Richard Cheney, Donald Rumsfeld and Condeleeza Rice would be prudent to pray every day that there is no justice in the afterlife.
More than 10% (some studies say more than 30%) of the 1.5 million Americans who served there can be reasonably expected to endure a life of PTSD and/or TBI, a crippling epidemic that was, as noted above, inflicted by our nation on our nation.
Today, shortly after counseling a Vietnam era PTSD survivor on a matter (short answer: sorry buddy, but the your service to our nation has left you screwed and there is nothing you or I can do about it; try to rise above!), I saw a memorial  on 1st Avenue in Seattle to the Washington State troops killed in action. I didn't see their walking wounded comrades, but they're here.
Iraq is now quite friendly to Iran (you didn't read that in your corporate-owned newspaper? surprise!) Russia and China are both stronger, relative to the U.S., than they were before our forces were frittered away in another land war in Asia. The high moral ground we held after 9/11 was completely wasted.
Many of us saw this coming. Millions of us warned that this war of choice was based on lies, and as lies so often do, would lead us to disaster. We hoped to head off this calamity.
We failed. The aristocracy of evil who sent better men and women to die for their lies prevailed. They live lives of comfort and luxury while their victims rot, some in graves, some still walking.
We who failed still owe the survivors. The crimes were committed in our names, by our elected leaders, and in a democracy that means they are our crimes. If our current leaders are too cowardly to prosecute them, it remains for us to make restitution to their victims.
In the face of this calamity, we are not helpless. The good news is that we each can do what we can. In my case, Lawyers for Warriors and SDMCC are little enough. In your case, what will you do?
at 9:24 PM No comments: Links to this post